I first went to Las Vegas in 1998, on a package deal and stayed at the Luxor Hotel.  They made us enter through a back entrance, with a small registration desk, away from the main reception! I felt small and decided that I would never go to Las Vegas on a package again.

I came back to Las Vegas in 2014, during a business trip and stayed at the Hilton, which was a little out of either the strip or the downtown area – sort of near nothing.

This time, we stayed at the Tropicana – recently renovated and now part of the Hilton Chain and on the strip!  I finally got it right.

Since we are not big gamblers, we decided to rent a car and visit areas around Las Vegas first.

The first day, we went to Hoover Dam.

We went on a tour of the Nevada Side turbine room. 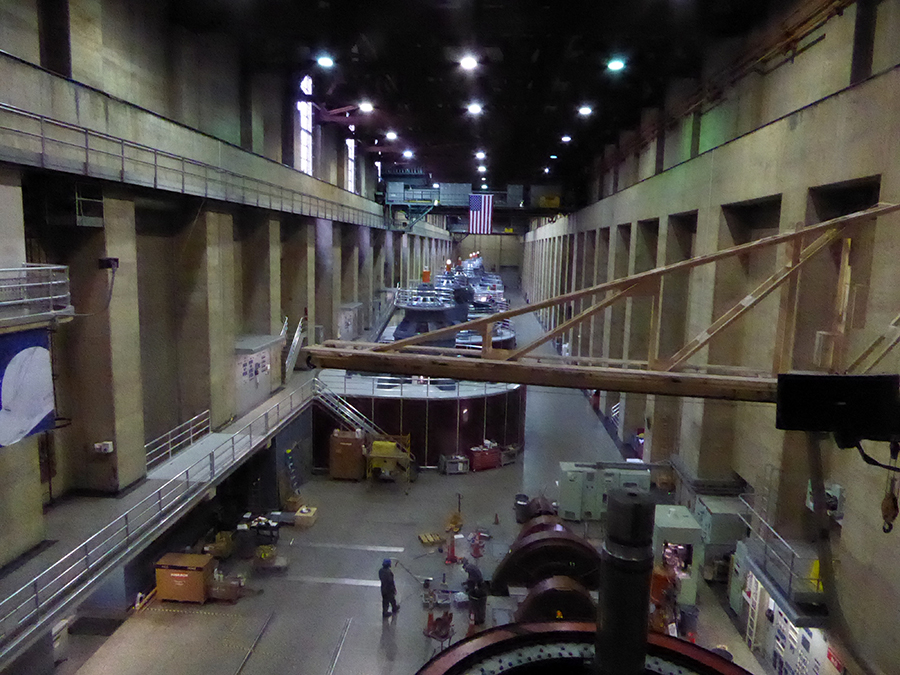 They are equipped to repair all machines right there.  This is the eighth turbine going through maintenance. 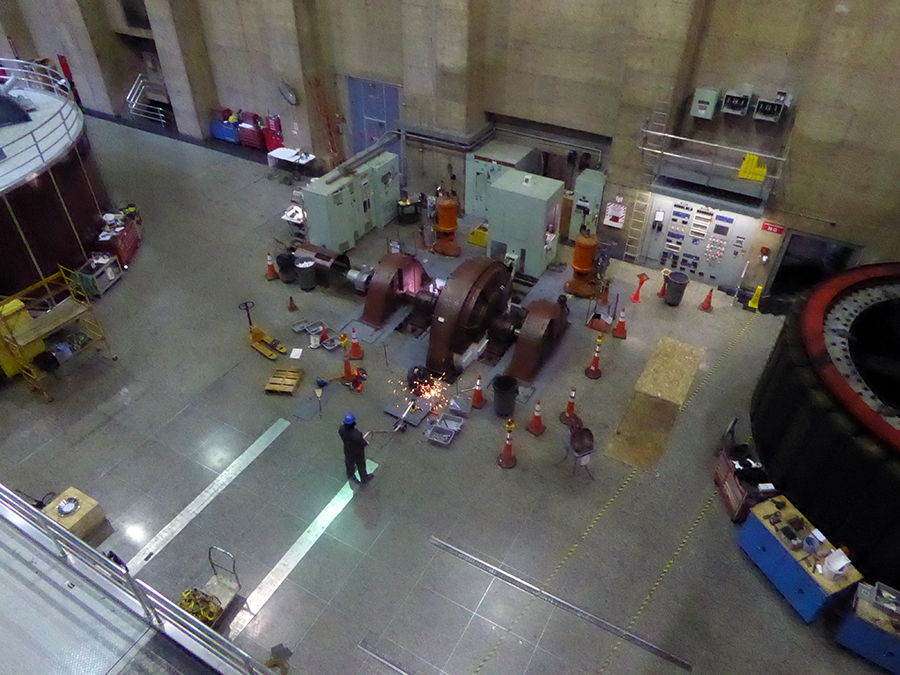 The highway used to go right over the dam – it was usually a major traffic jam and became very dangerous for pedestrians.  A few years ago, they built a new bridge that by-passes the dam and the road on the dam is now essentially a dead-end with limited traffic. 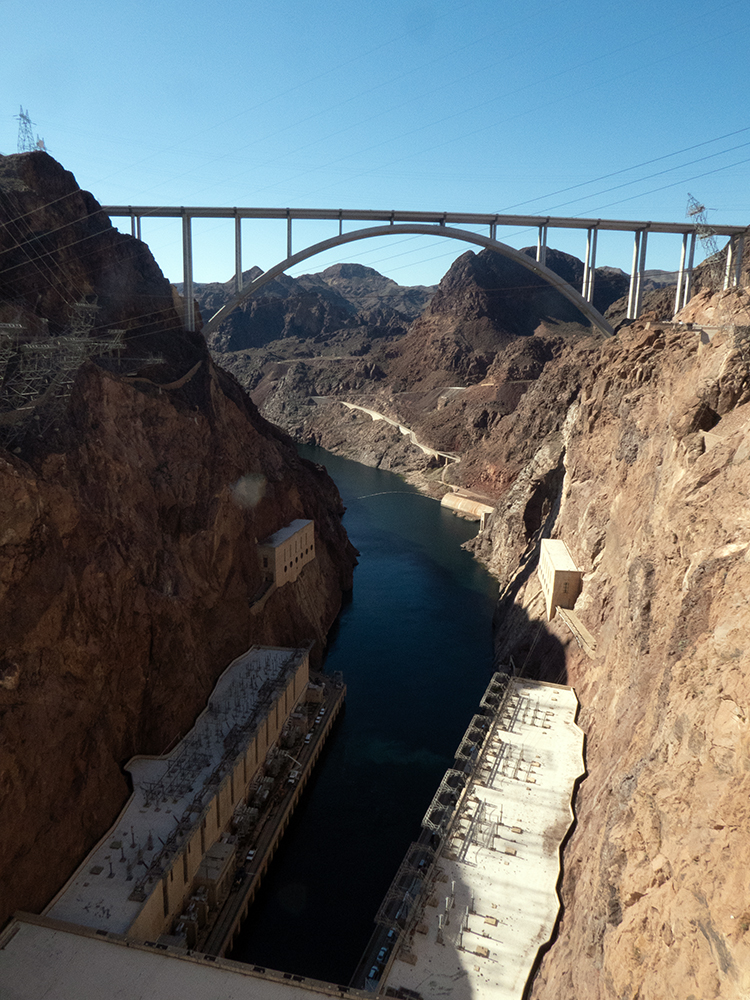 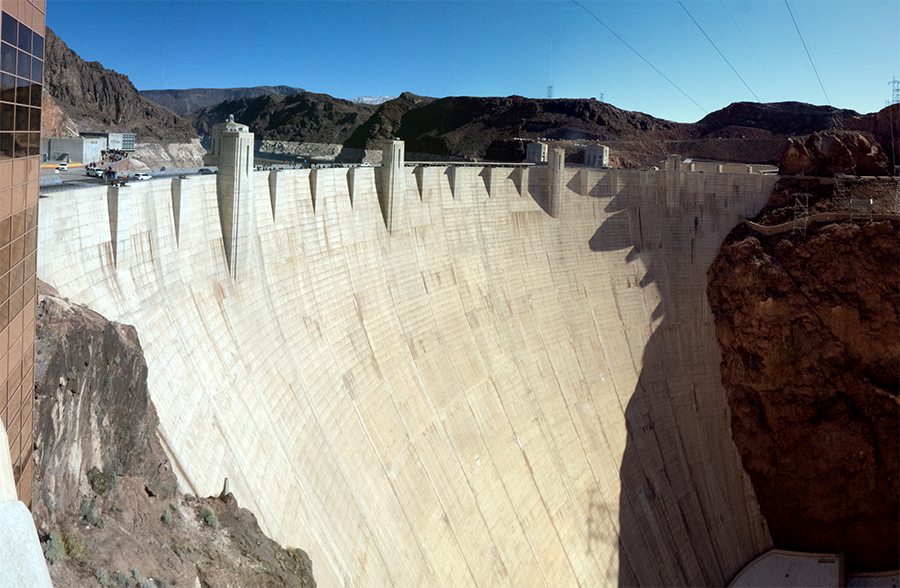 The upstream side of the dam from the Arizona side – water level is low (very low) as there has been only limited rain and snow on the mountains. 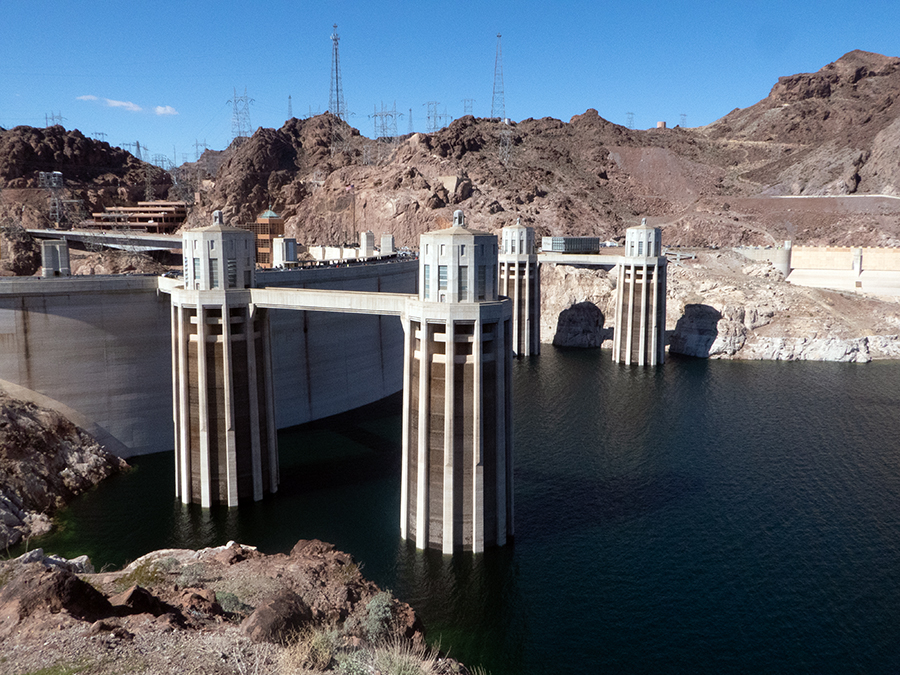 The dam as seen from the new bridge.  The Nevada and Arizona turbine rooms are visible, respectively, on the left and right of the photo.  The dam remains a very important source of electricity for both states, but even more important is the water reserve that is used in many surrounding states, including California. 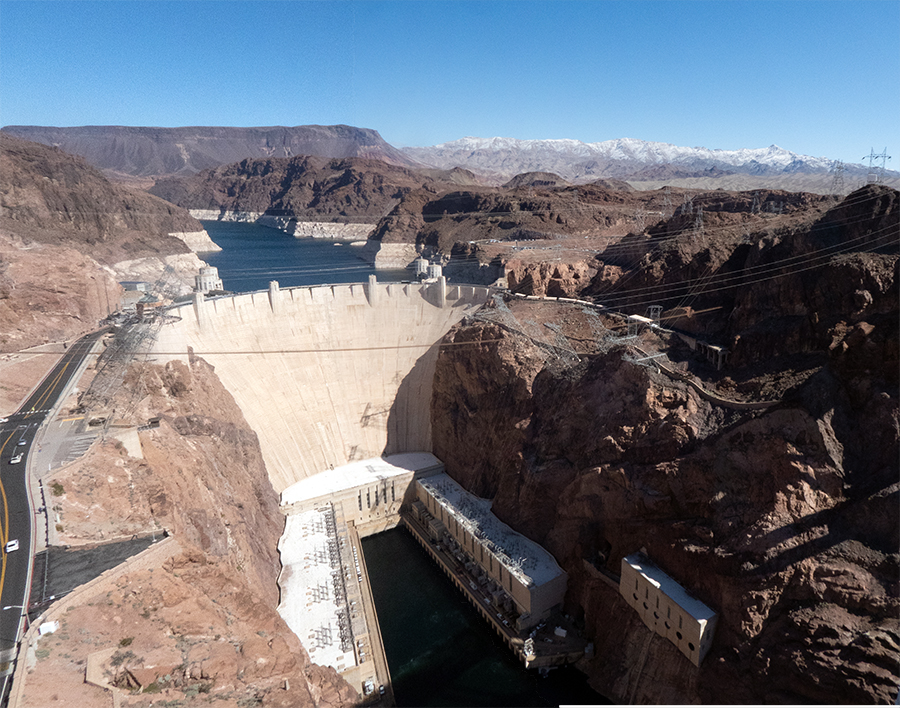 We took a walk in a Natural Preserve just outside of Las Vegas – from the side of the mountain we had nice views of the city with a little snow left on the mountains. 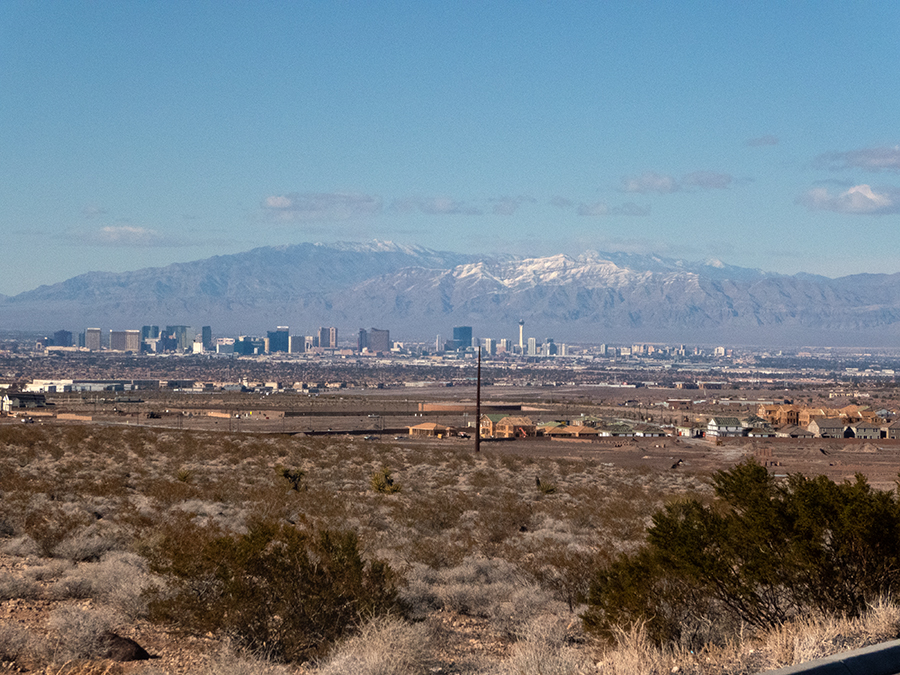 This is the city that should not exist – there is nothing anywhere near here! 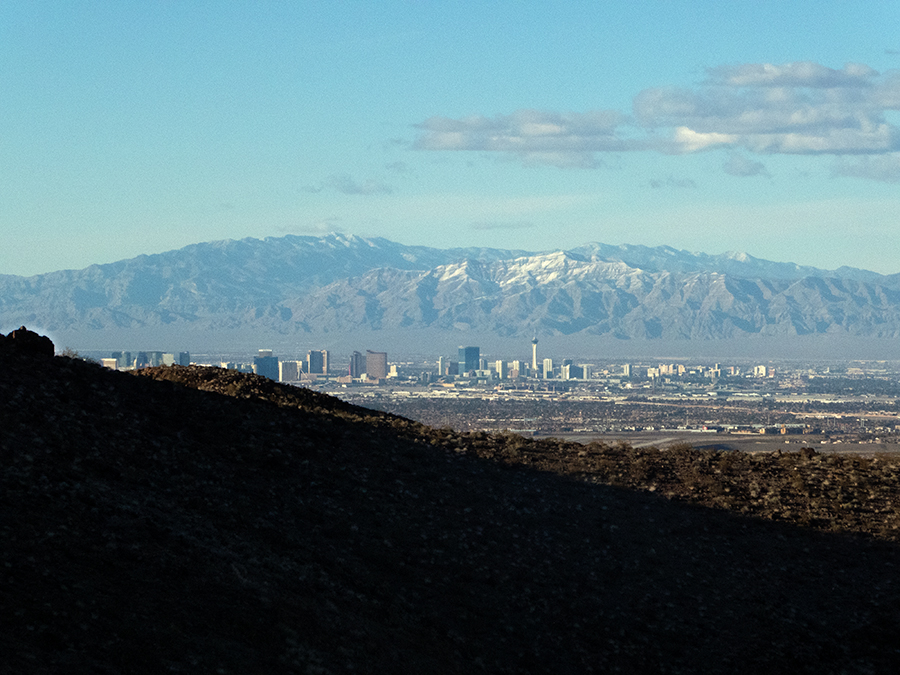 Since we had a car, we decided to visit Downtown and went to Fremont Street.  It is very exciting and there is always something going on.  The roof is covered in LED panels that are constantly changing. 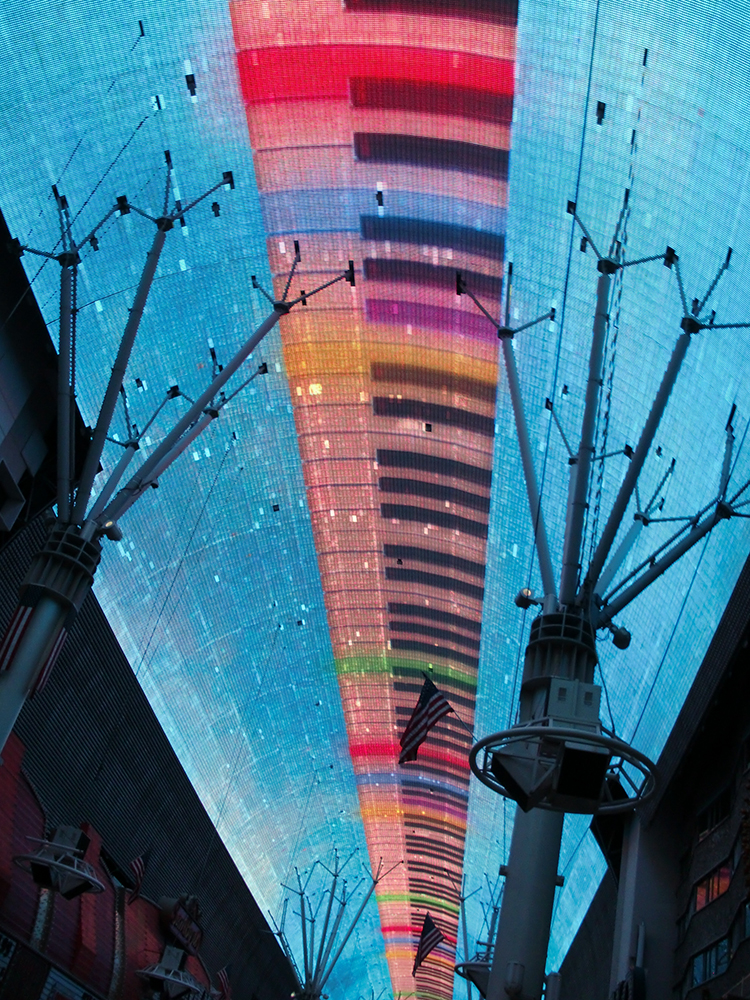 There are dozens of acts every few meters.  After careful examination we noticed that all acts were restricted to staying within a circle painted on the pavement – I am sure that they are controlled and  not everybody can just walk up and do something there.  Some of them were very good, others were a bit annoying.  There are really good performers, others are just there in a costume and expect you to pay to have your picture taken with them.

On the second day, we went to Death Valley.  Even before we actually got to the bottom, the views were already very nice. 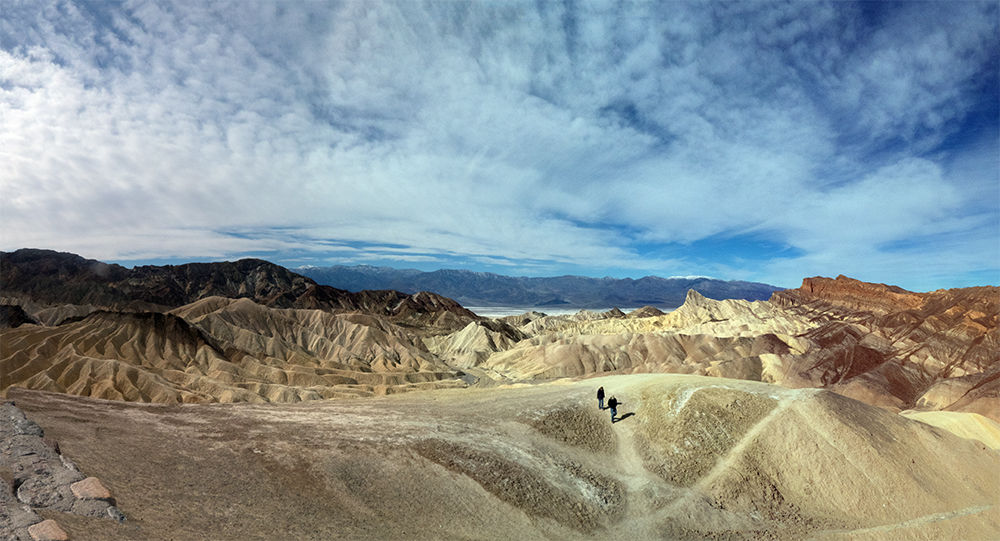 Since this is February, the temperature was still very nice – we actually had to wear a fleece on this walk. 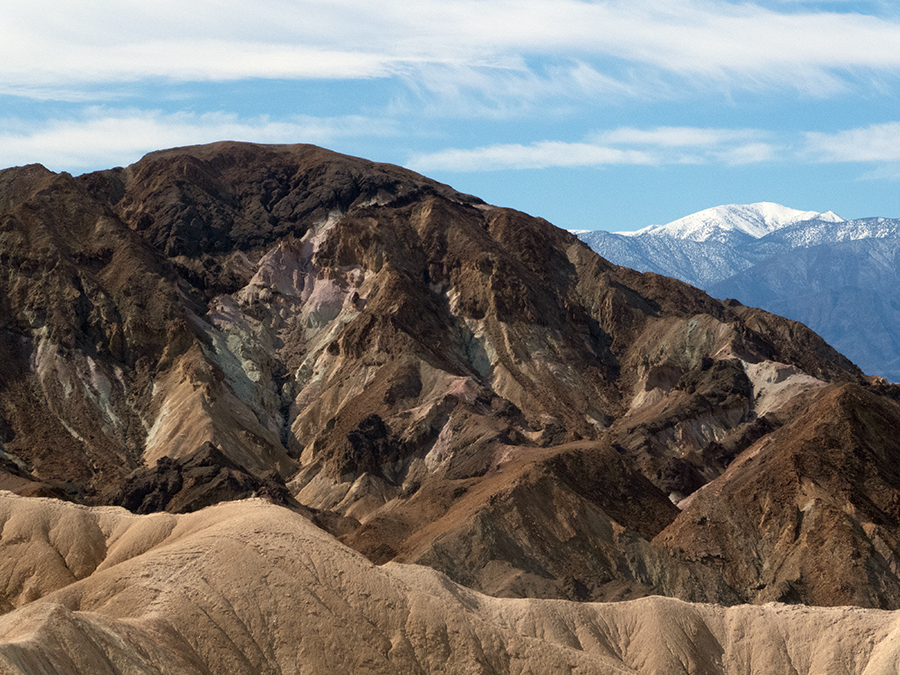 We went to visit what is left of an old Borax Factory.  This was the first claim to fame of Death Valley, long before tourists ever came. 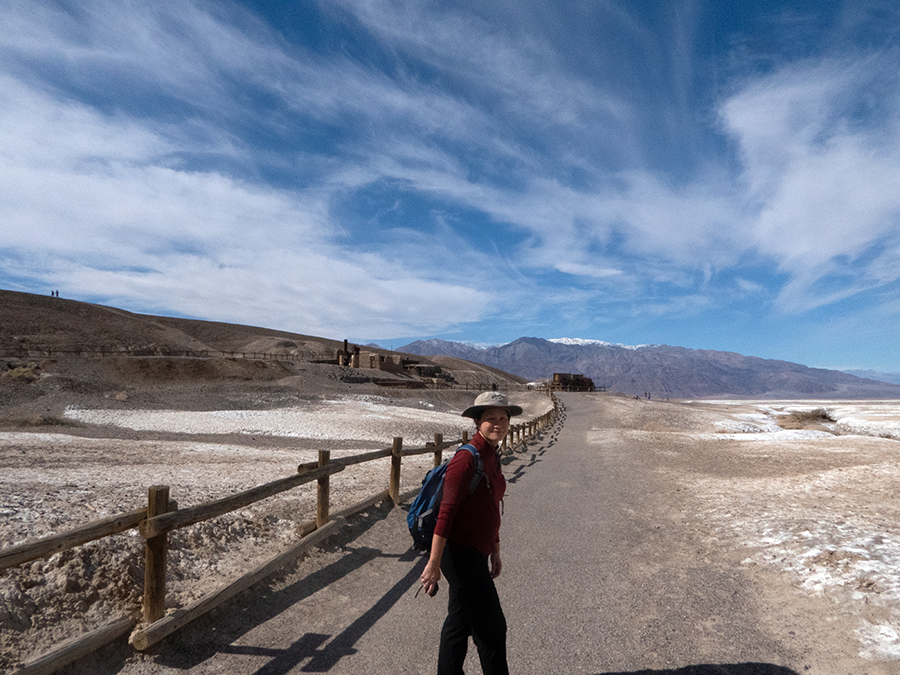 The extraction of Borax was carried out for 6-7 months out of the year, when the temperature was  not too hot.  The Borax was actually purified on the spot to limit the weight that needed to be transported out of the valley.  All product was transported by mule trains (as many as 40 mules were used) back up the steep slopes to the nearest town where a railroad could then be used to transport the Borax further. 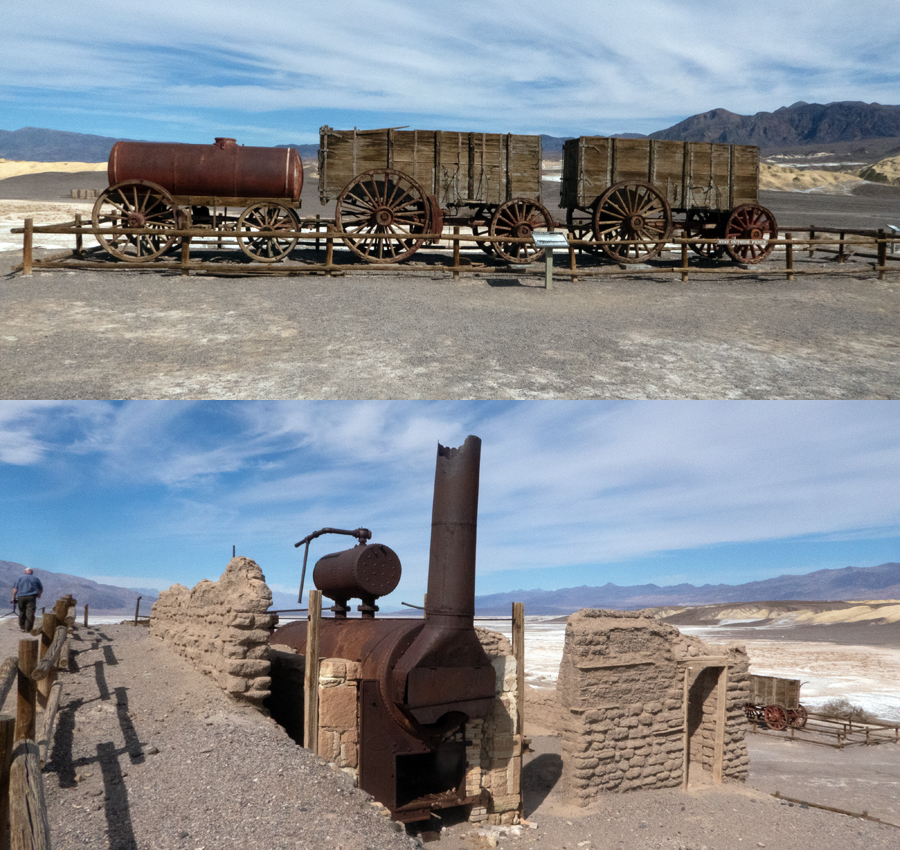 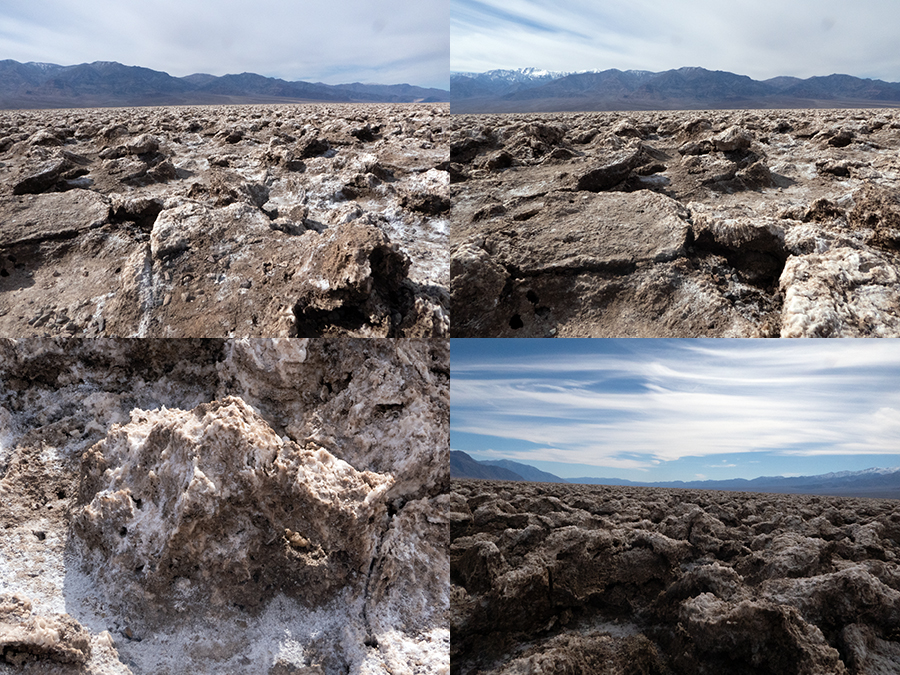 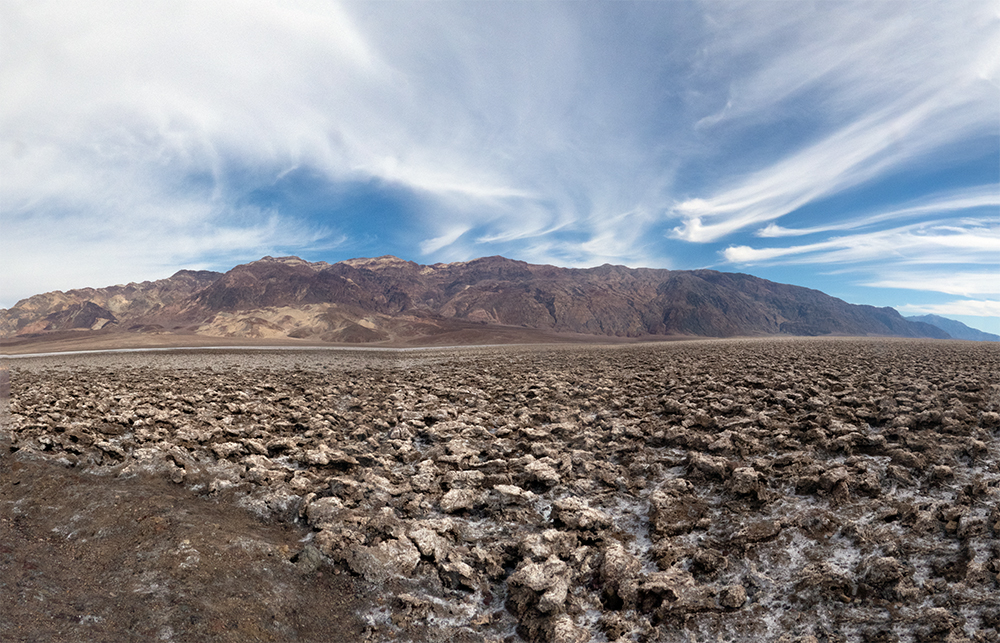 The lowest point in the Valley is called Bad Water, and there is indeed water, but not drinkable – it is loaded with salt, hence the name “Bad Water” 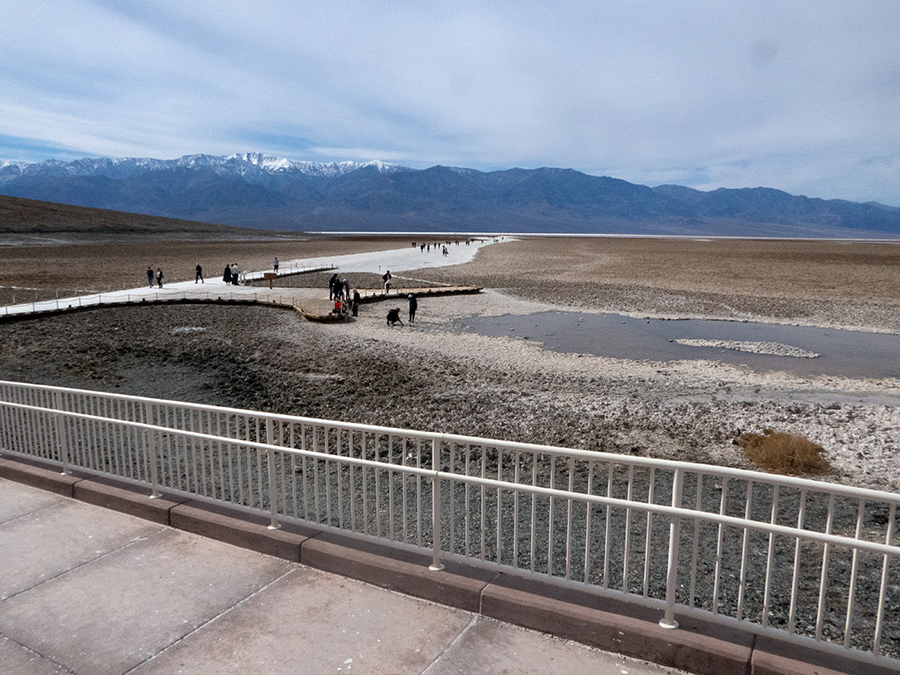 We noticed that people were outside of the barriers and appeared to be doing some experiments, so we stopped and talked.

It is an international (American, Spaniard and Chinese) team of scientists collecting data as they do regularly to monitor the salt level of the water.  The samples and the data is then shared with many Universities. 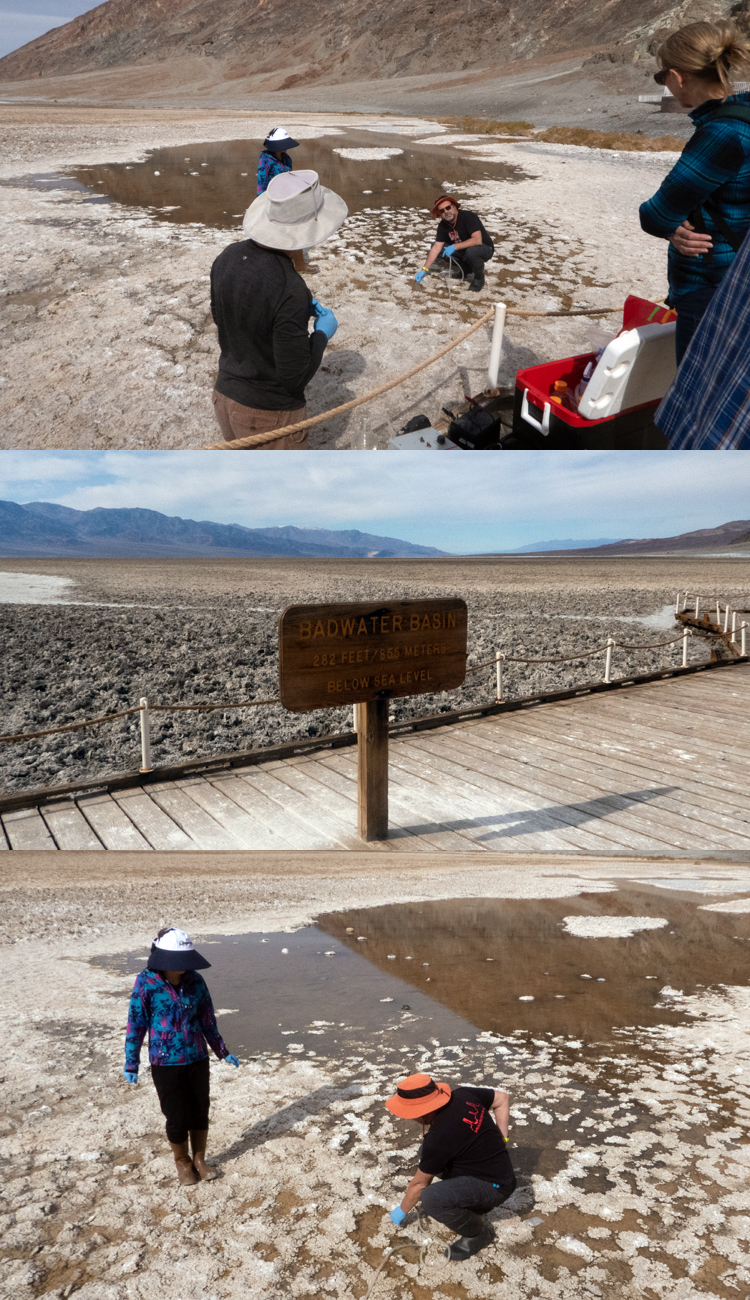 We are walking on pure salt accumulated over many years.  The temperature here is much warmer and the sun felt really hot.

Tis is essentially a 360 degree panorama which I plit into two photos of 180 degrees each – I have not quite figured out how to create one of these moving 360 photos that I see on Facebook. 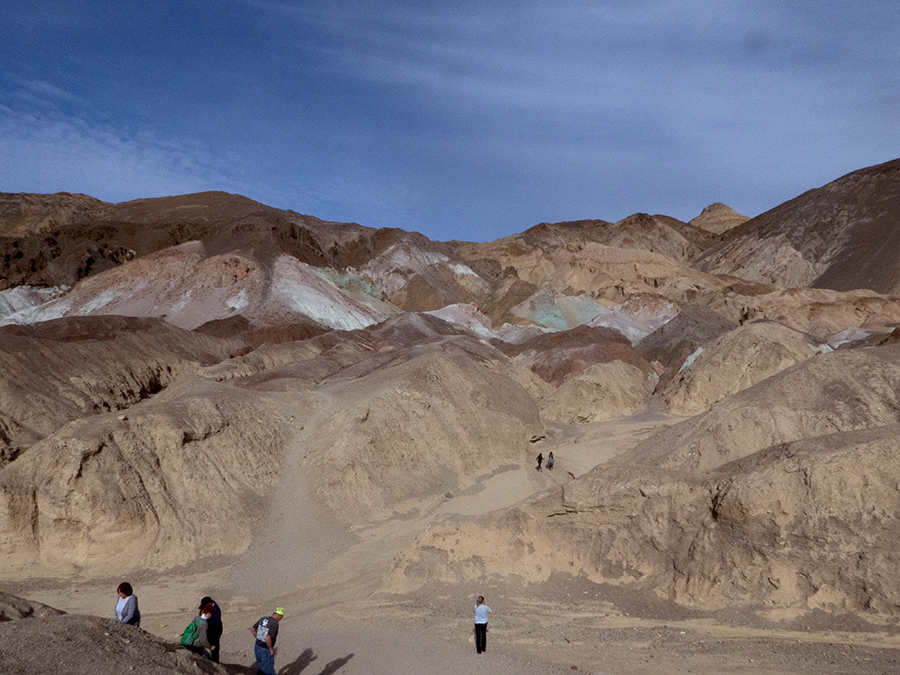 On the third day, we finally explored Las Vegas and started from the top of the Eiffel Tower.  It is a 1/2 size replica of the one in Paris! 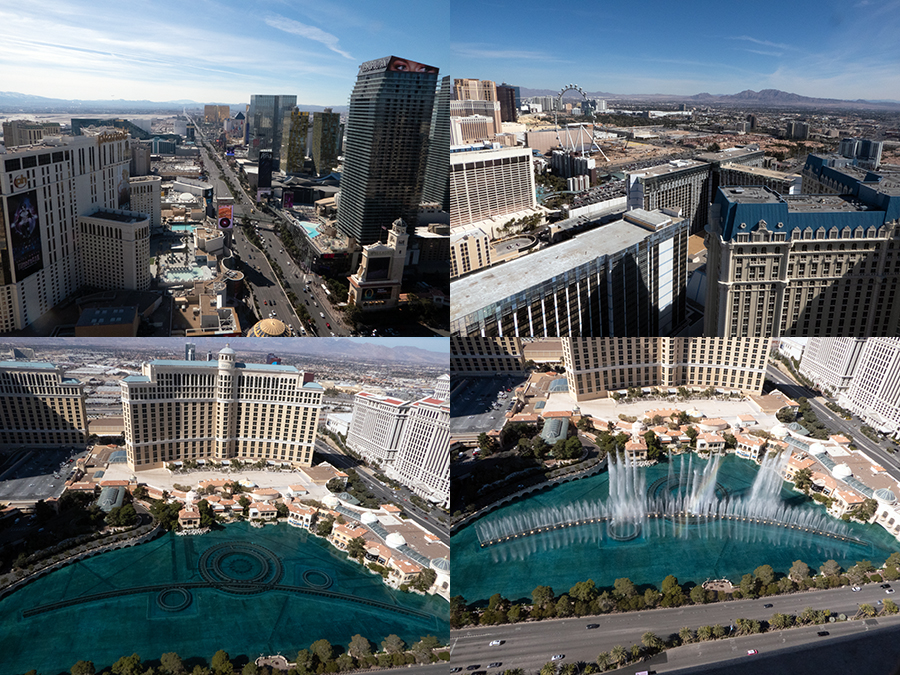 Since the Paris Resort is located across the street form the Bellagio, we waited for the famous fountain show and got to see it from above. 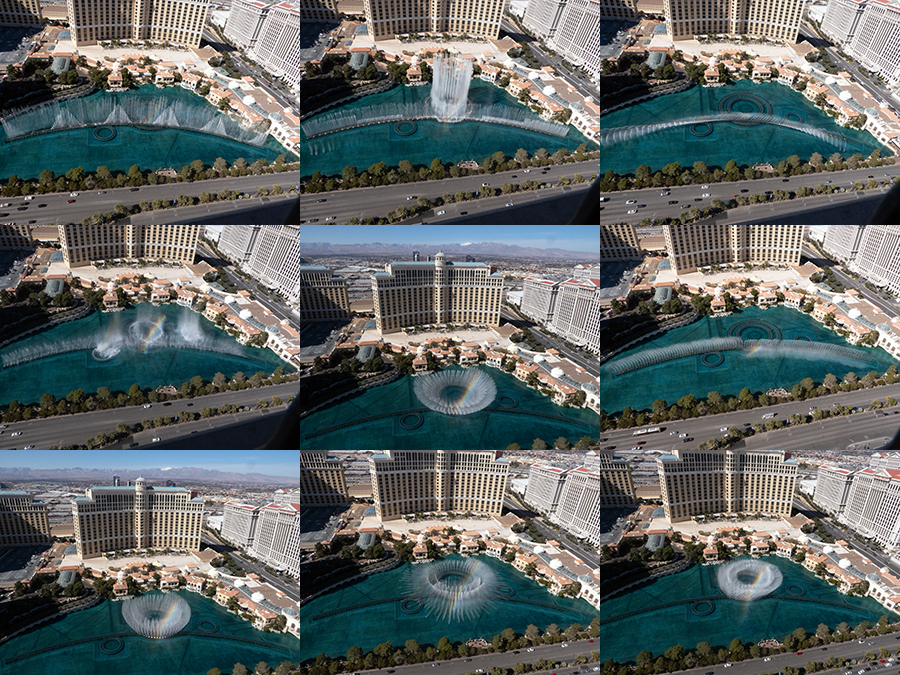 We came back to the Bellagio at night too. 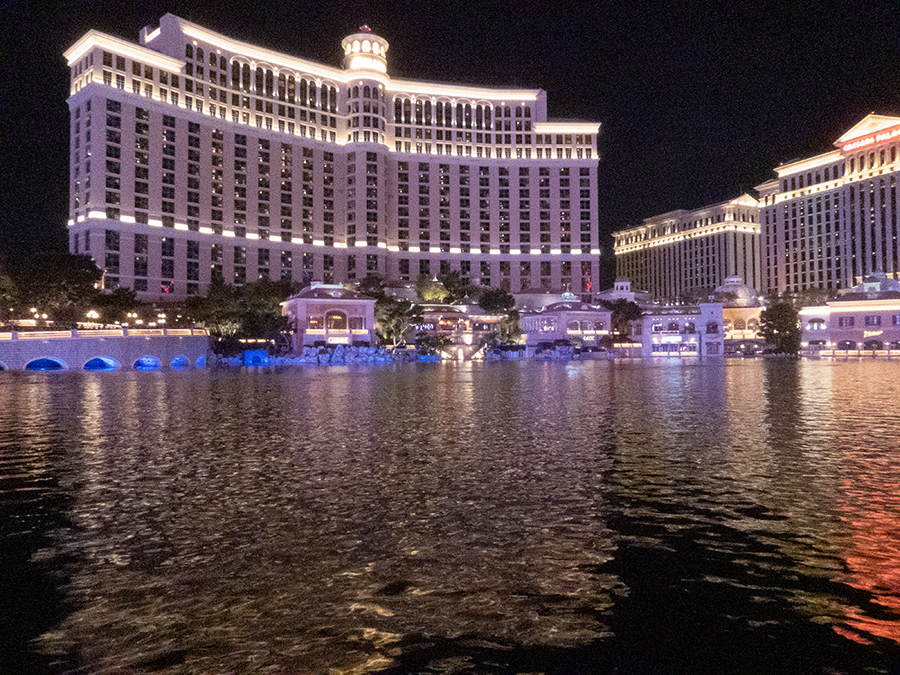 And saw a second fountain show 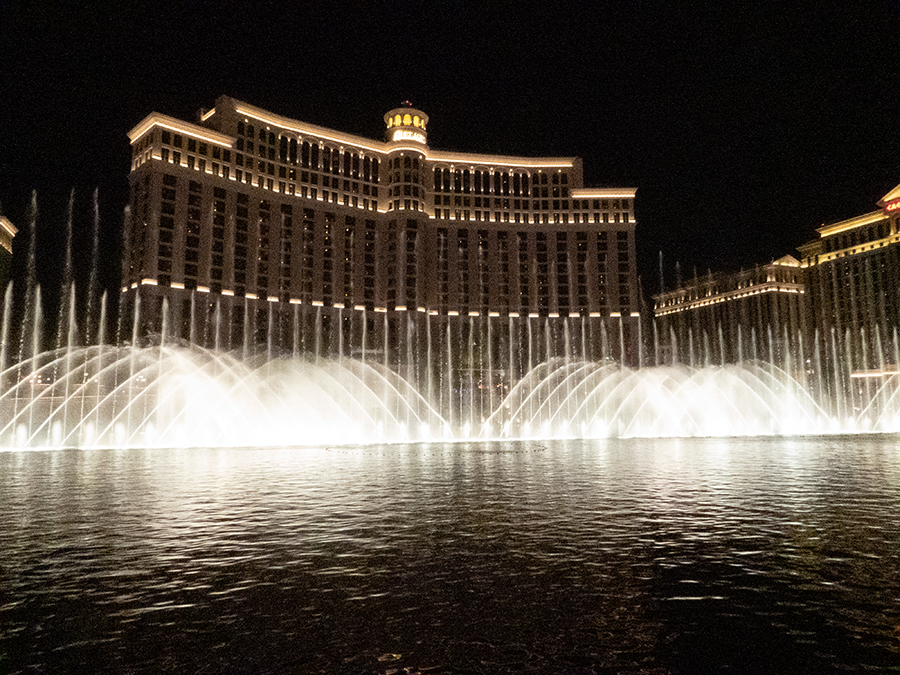 Here is the Eiffel Tower from the Bellagio 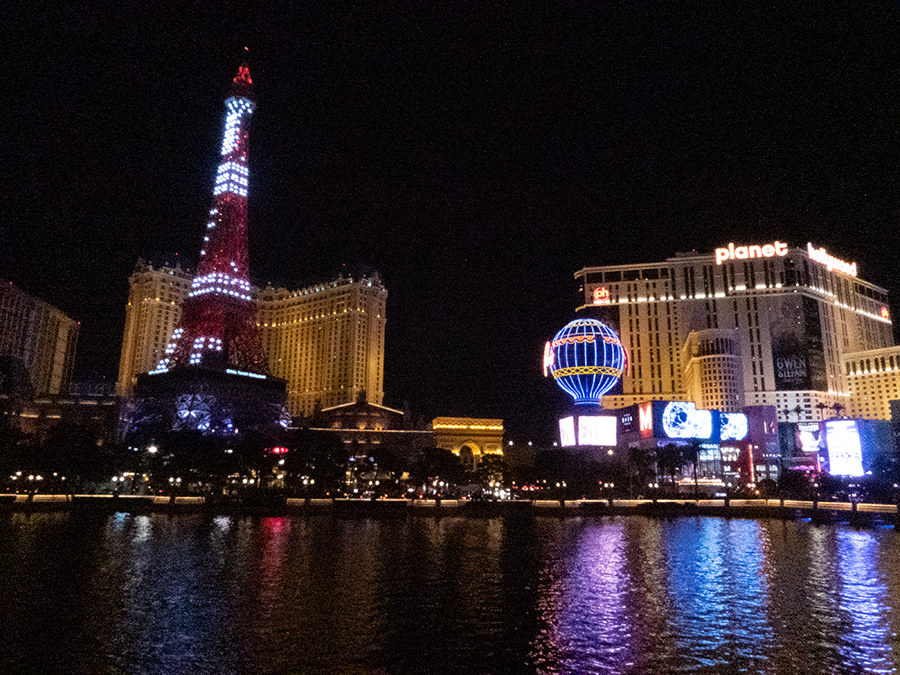 We had a great time.  We did go into a few casinos, and I played a few games of Poker (not on a table, but using a Poker Machine).  Did not lose money and actually made enough to pay for an extra beer here and there.

I think you cannot say that you really know the United States, or the American People until you have been to Las Vegas.  It is an exciting place, but I am not sure there are many more reasons for me to go there again now…