We are slowly starting to travel again, in small steps…

We decided that we did not want to go too far, and not across more than one border.  Our first trip was to Auvergne, right in the center of France, a region that neither of us had visited before.

And in Auvergne, the first thing we did was an early morning flight in a hot air balloon!  How early? See below! 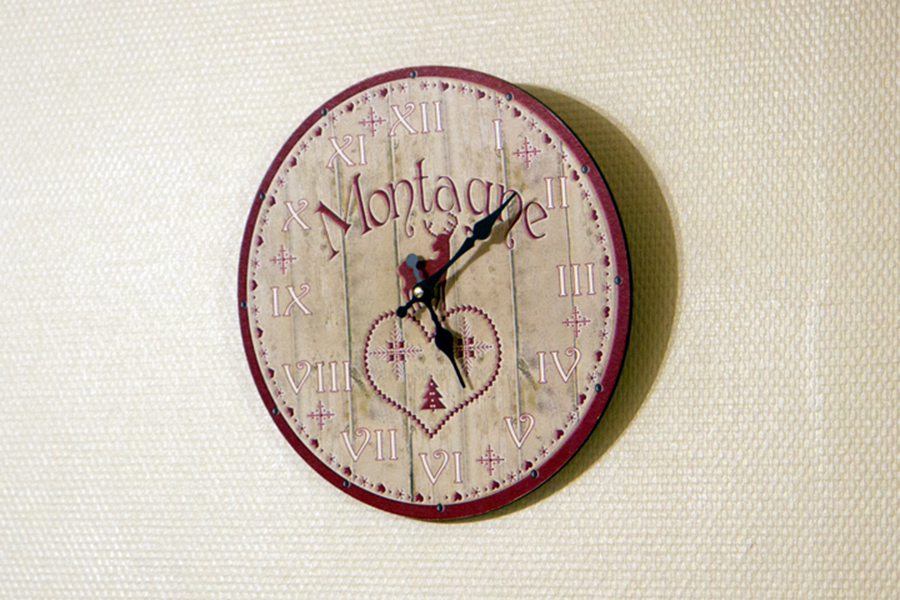 This was the clock in our apartment as we were eating breakfast – cannot go out without some food and a cup of coffee.  The real breakfast will be after the balloon trip. 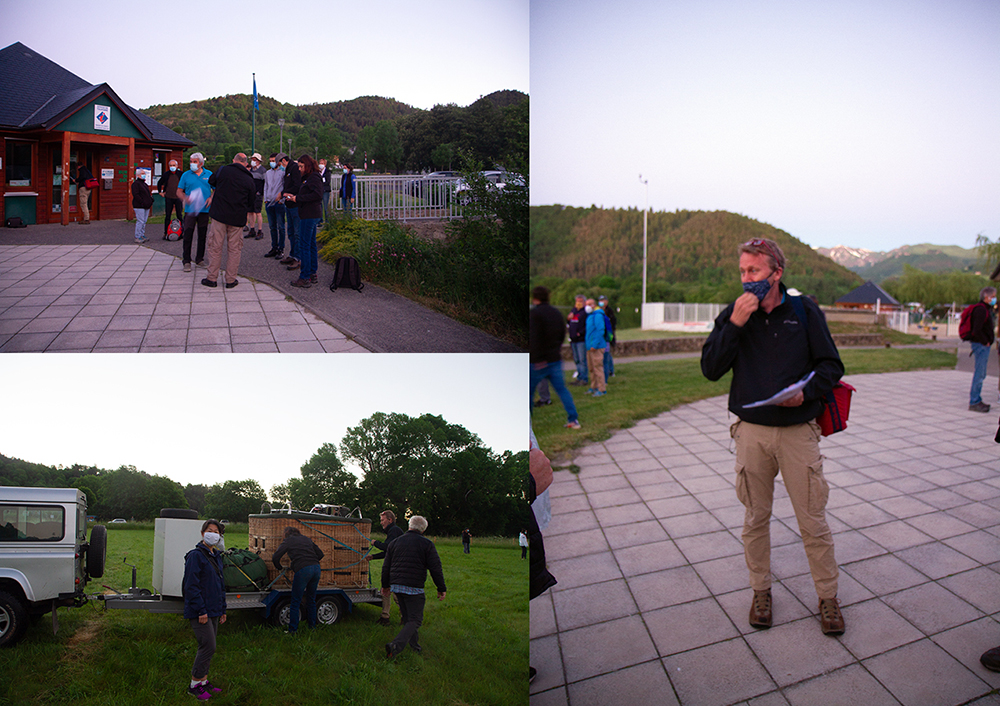 We had to meet across the street from the apartment (fortunately) at 5:30 AM and discovered that there was quite a crowd already waiting.  That photo is actually quite deceptive as at 5:30 AM, it is still dark! We finalized the formalities and were introduced to Stanislas, our “pilot” for the day and the gentleman on the right.  After introductions with the rest of our crew (we were in a small balloon with only 4 passengers + pilot) we were off to a nearby field in order to prepare the balloon for flight.  You can see our basket in the lower left photo. 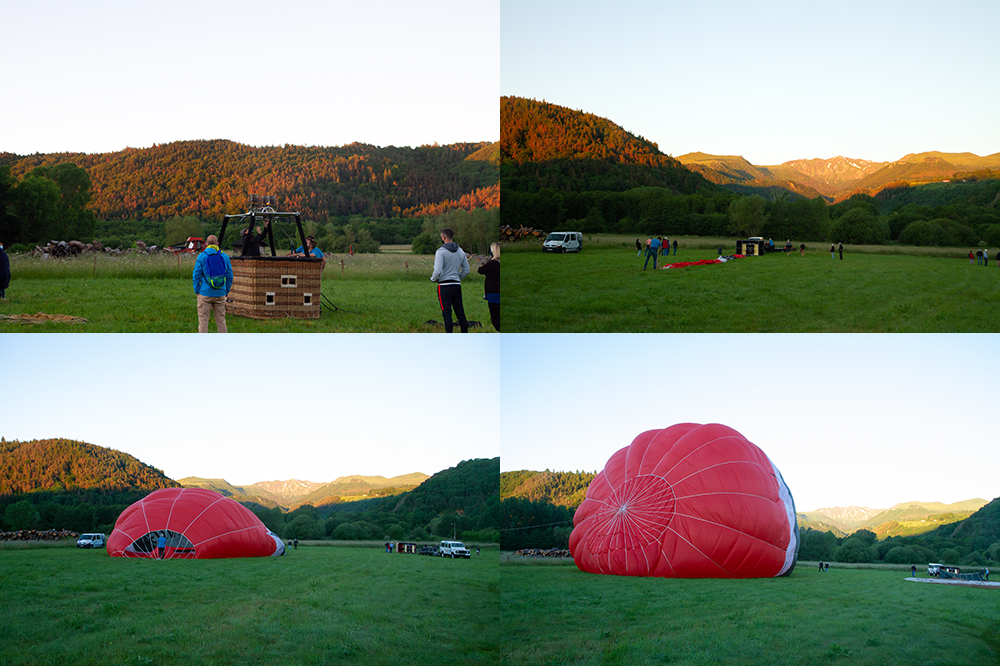 Here you can see the various steps in the preparation of a balloon for flight.  The passengers are actually doing quite a bit of the work, under the directions of the pilot and one or more helpers.  On today’s flight, there will be four balloons, which could be quite interesting as we will not be the only ones up in the air.  After unloading the basket, the balloon shell is stretched out and securely attached to the basket.  The balloon is inflated initially with powerful fans and only once it is well inflated, it is heated up with the burners to get lift.  That will be the next step for the crew of “Auvergne Montgolfière”, the red balloon here carrying the name of the company we are flying with. 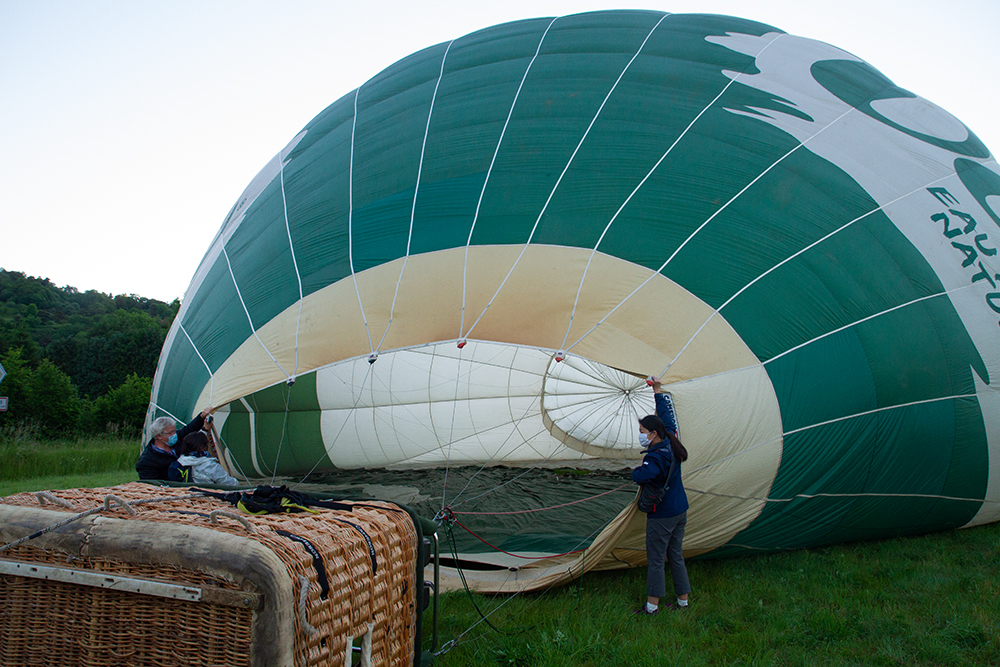 This is our balloon being inflated with one fan – it is called “Volvic” after a local water.  It is quite noisy actually as the fan is powered by a petrol engine! No power necessarily where you want to start your flight.  The departure point is determined to give us the best possible flight, carried by the dominant wind.  As we saw during the flight, there is a possibility to steer the balloon in flight by changing height, actually, a lot more than I thought but the general direction is still dictated by the wind. 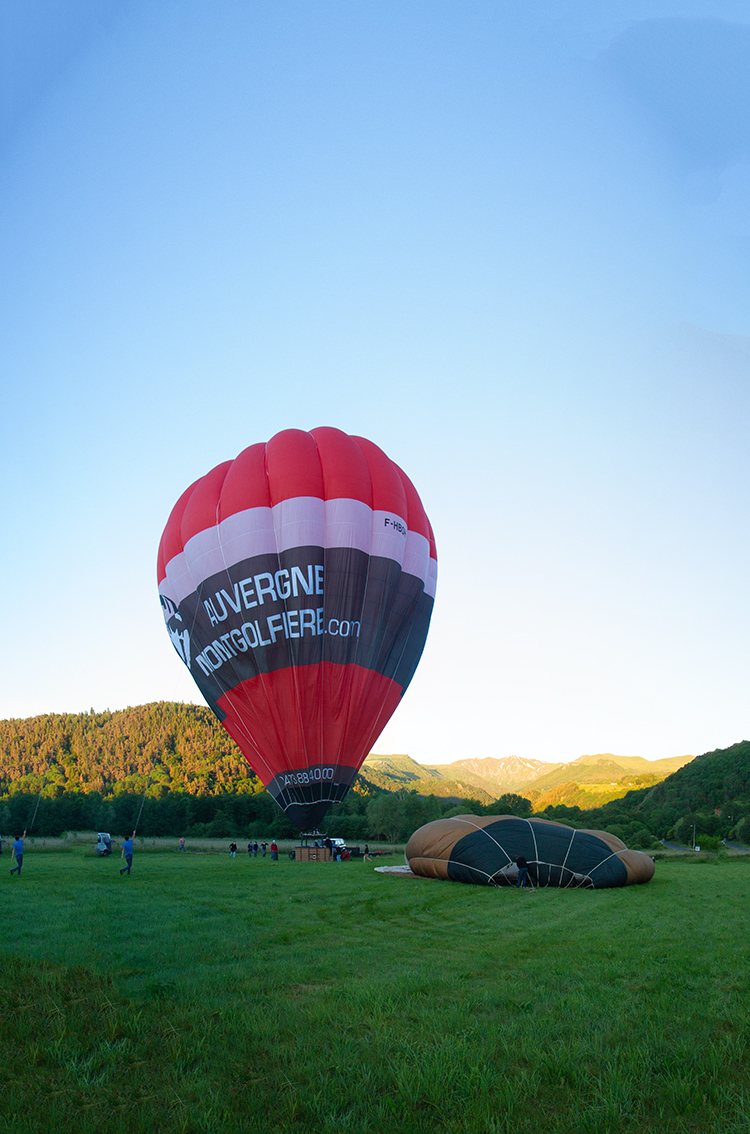 “Auvergne Montgolfière” is ahead of the group and now almost ready to leave.  It is a larger balloon with 8 passengers on today’s flight. 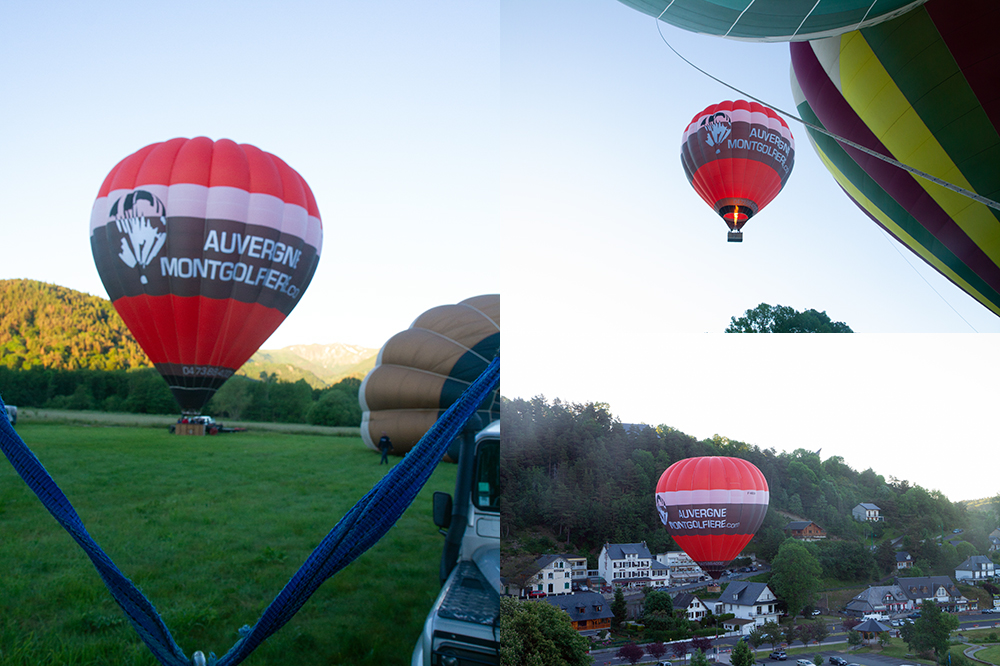 Ready?  Here it goes! We came up quite a bit later, but did catch-up to the balloon as it flew right over Chambon-sur-Lac, the small town where we are staying and right on Lac Chambon.  I should have circled our apartment which is visible on the lower right-hand photo… 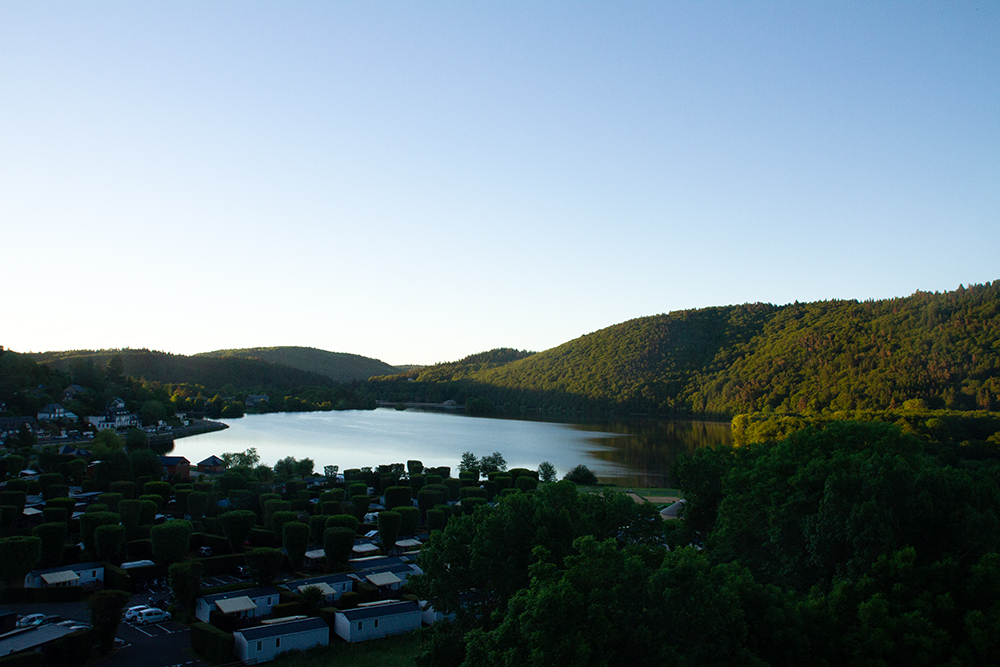 Here we are approaching Lac Chambon which is still mostly in shadows.  We never did go very high on this flight which meant that we could see the ground quite well and had a few interactions with the people on the ground, those who got up early of course. 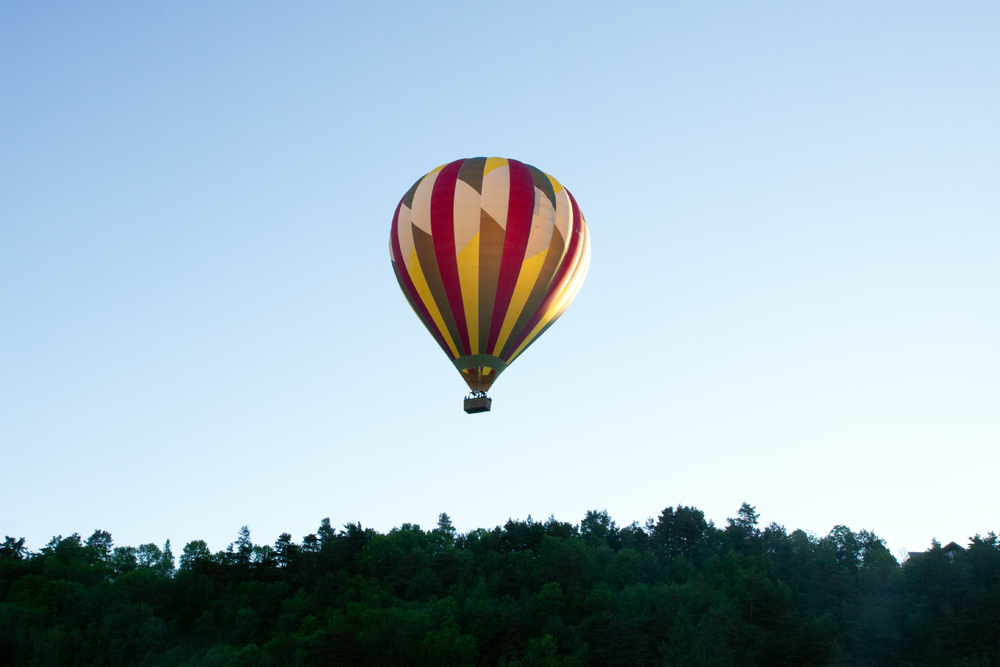 Here is another of the four balloons on this flight.  It did not have a name so it will be the “Other” balloon… 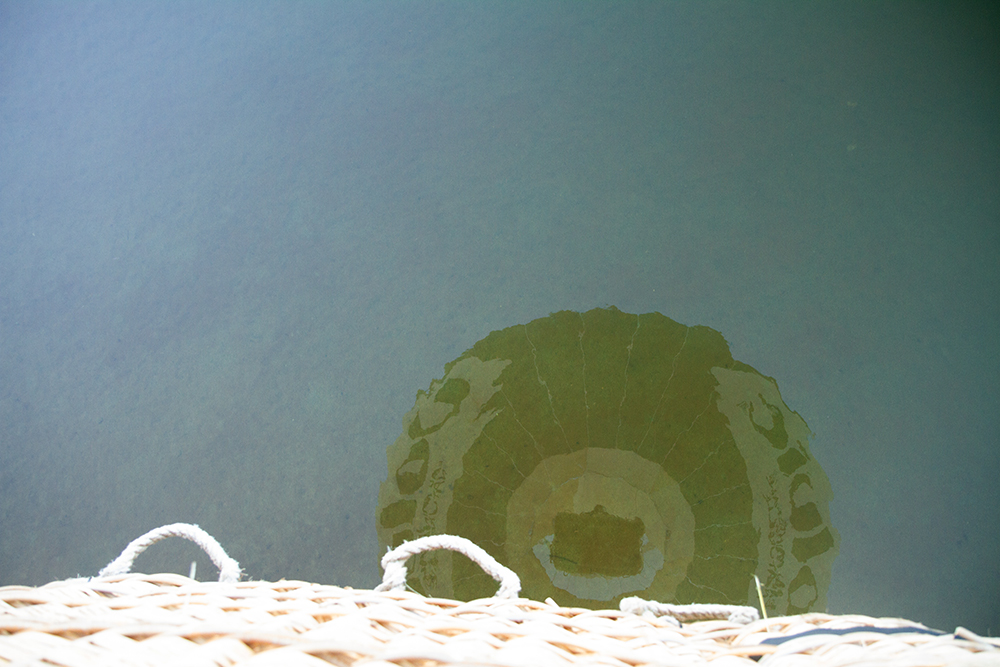 As we flew directly over Lac Chambon, we could see our own reflection in the lake.  I was really careful not to drop my camera while taking this picture. 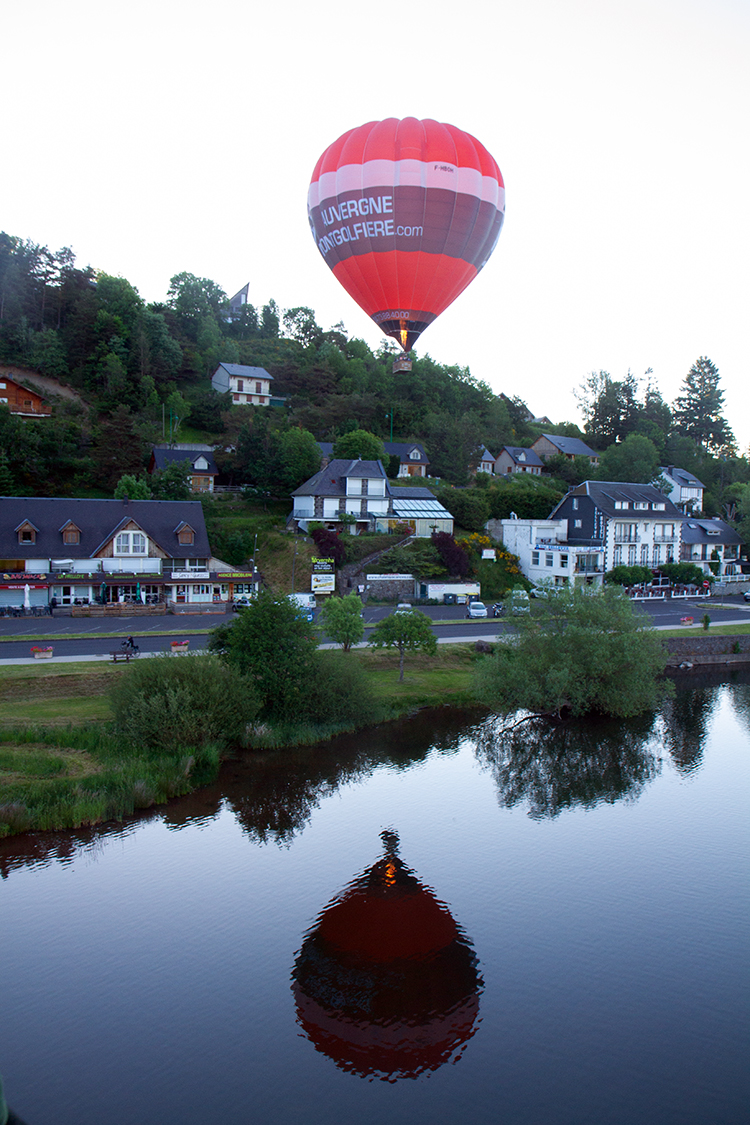 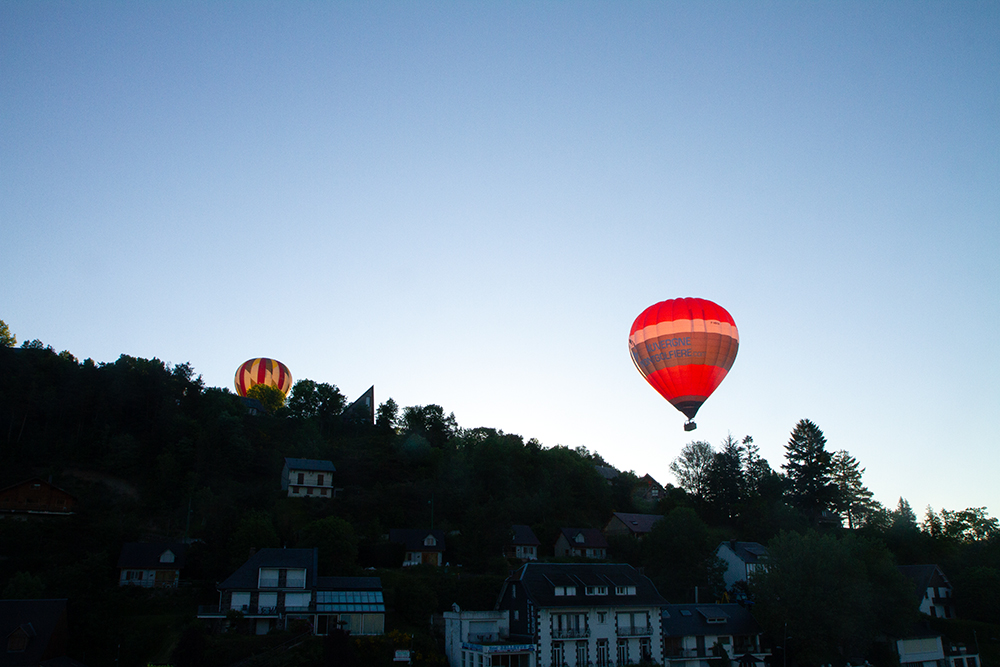 Two balloon already sun-lit as the town is still in the shadows. 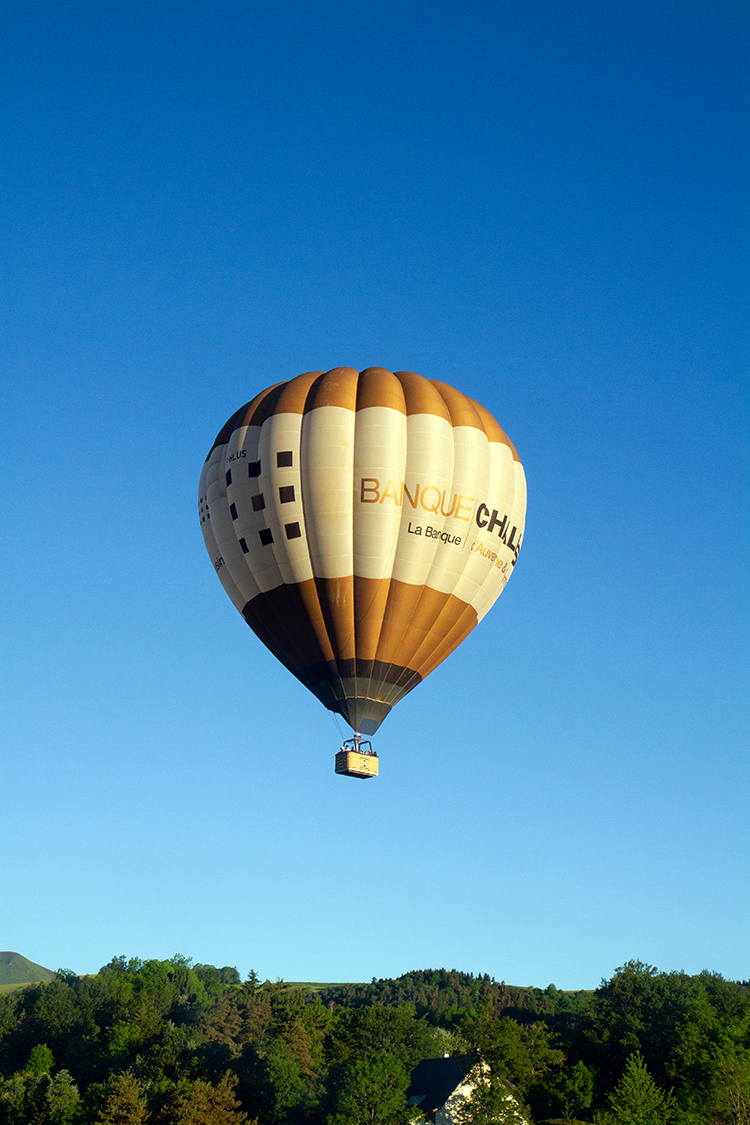 The fourth balloon on this flight is called “Banque Chalus”. 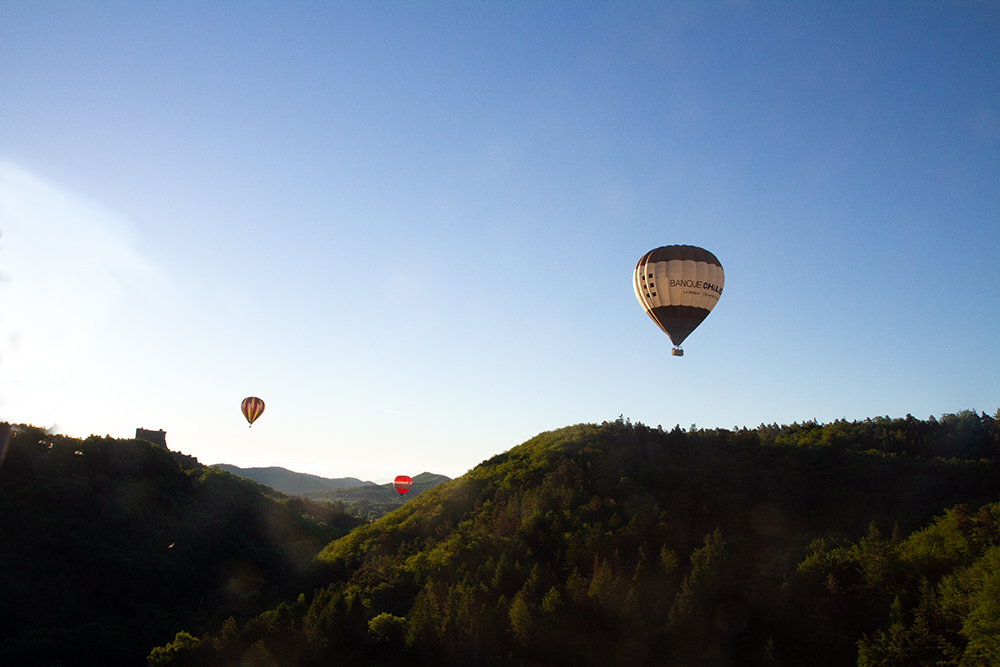 Here is a photo with all three other balloon as we approach the town of Murol, on the opposite side of the lake.  You can see the Chateau de Murol on the hillock on the left.  We will see it much better later. 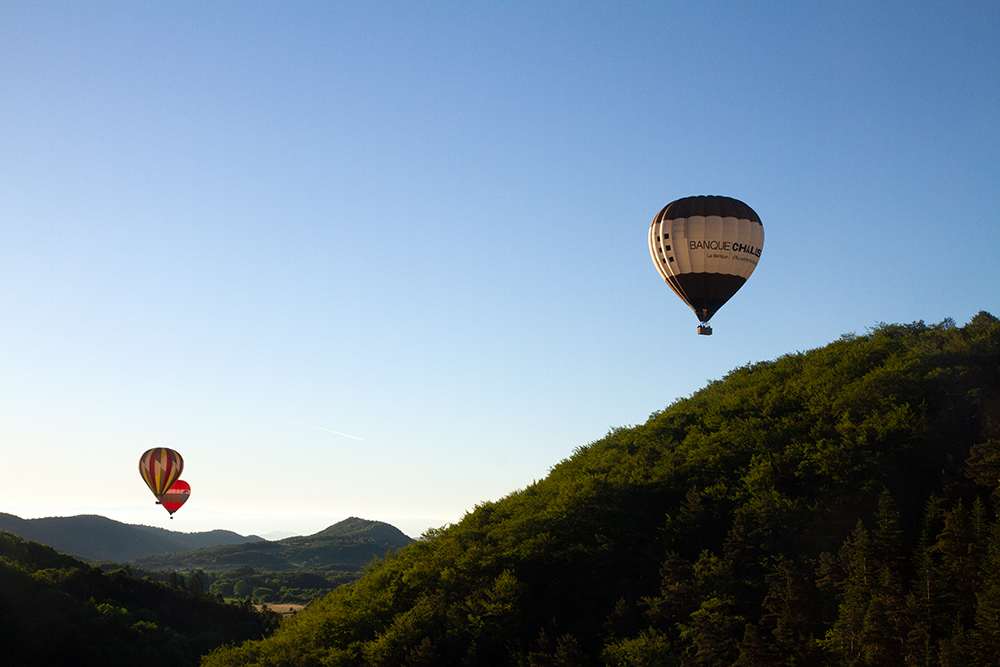 One more time!  It is not common to see three hot air balloons in the sky, so I took several photos where we could see all of them. 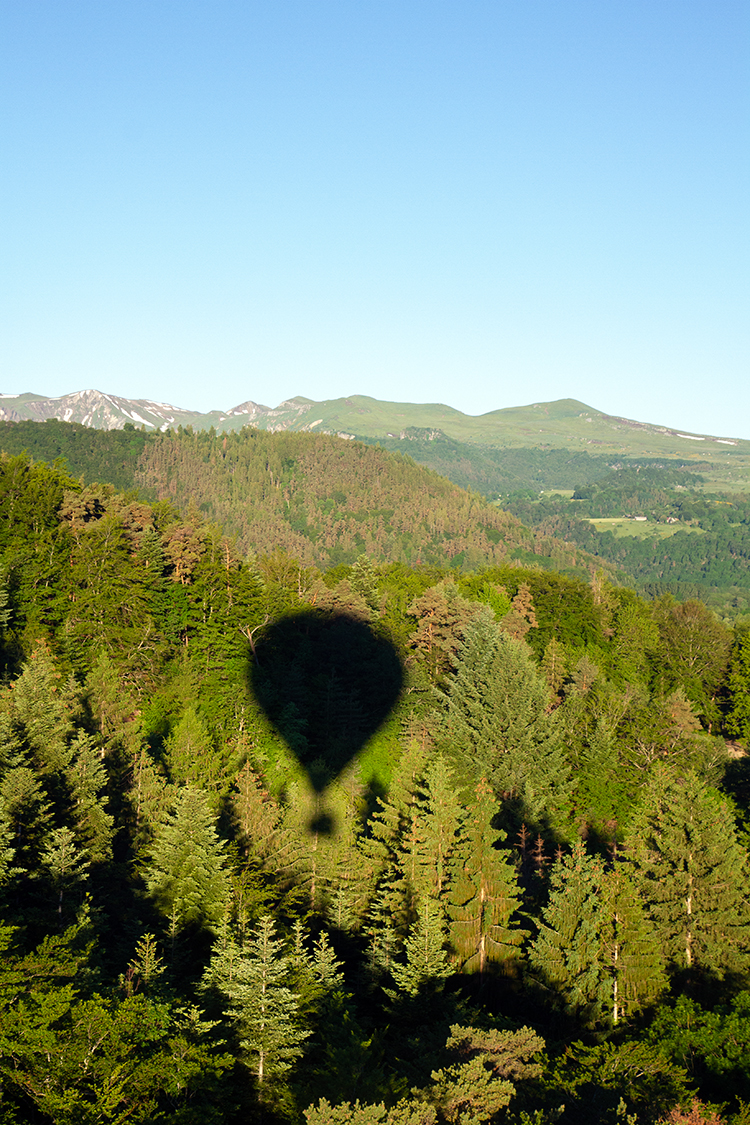 Our own shadow – we are now high enough to be in the sun and cast a shadow on the trees. 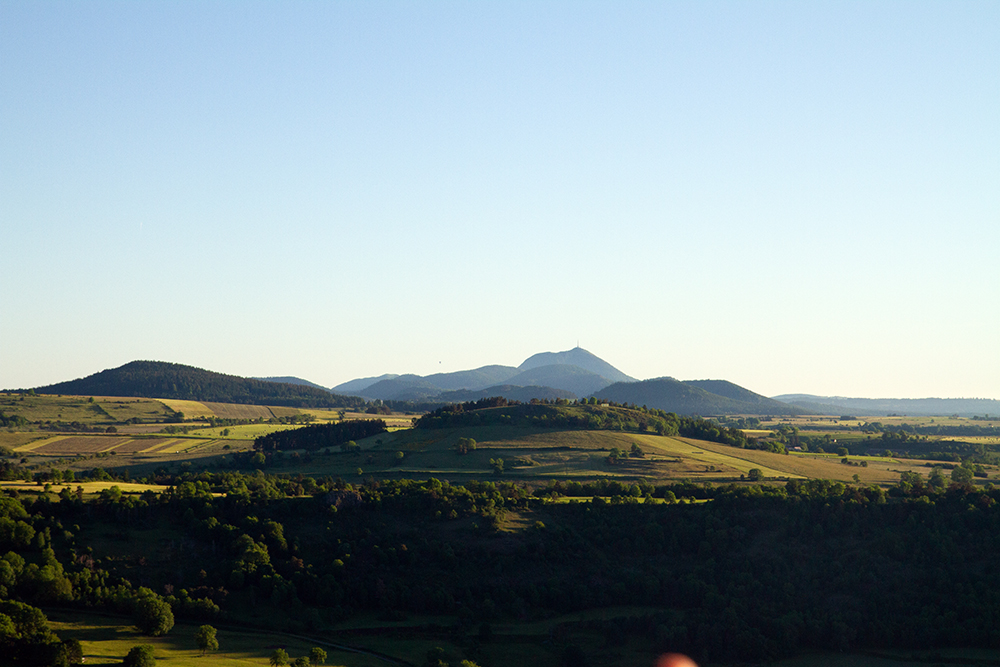 We had a great view of the “Puy de Dôme”, the iconic extinct volcano that is a symbol of the local area –  I always thought it was the highest mount in the Massif Central but discovered on this trip that it is not, only second highest.  You can just guess at the weather station at the top of the mountain in this photo. 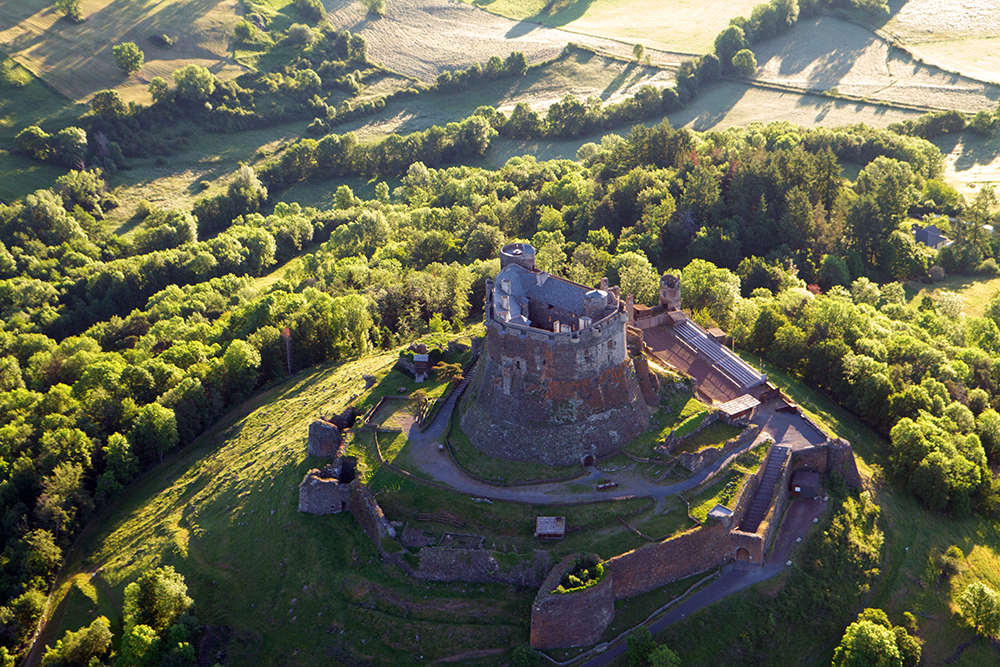 Here is a shot of the chateau de Murol.  Not the best as it was looking into the sun, but it shows that we nearly passed right over the castle. 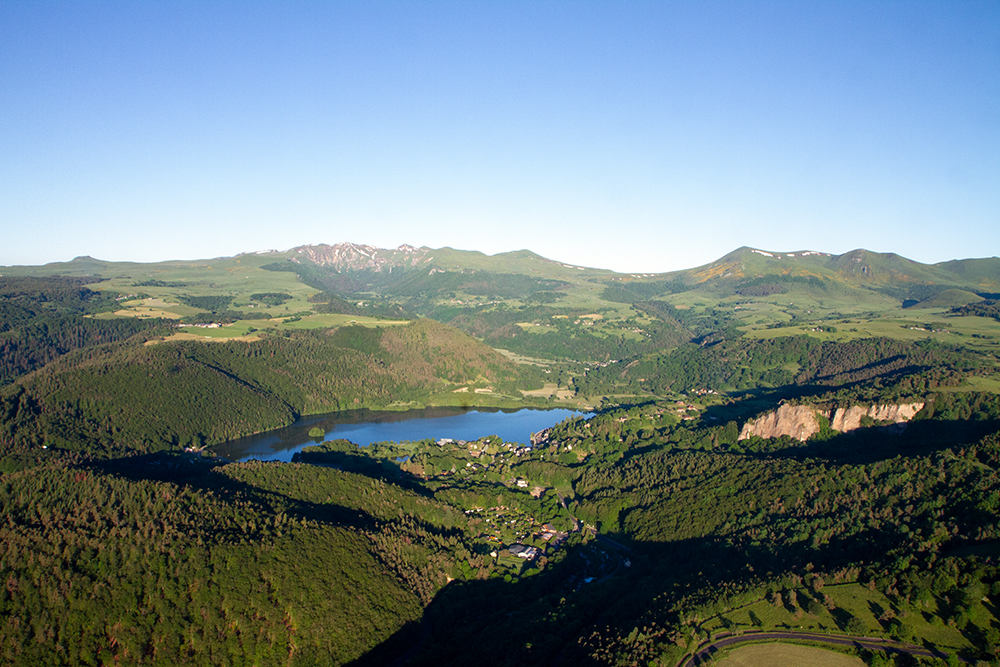 Looking back, here is the Lac de Chambon again looking towards the Puy de Sancy which is the highest mountain in the Massif Central.  One of the fields visible on the far side of the lake is probably where we left from only 40 minutes before this picture was taken. 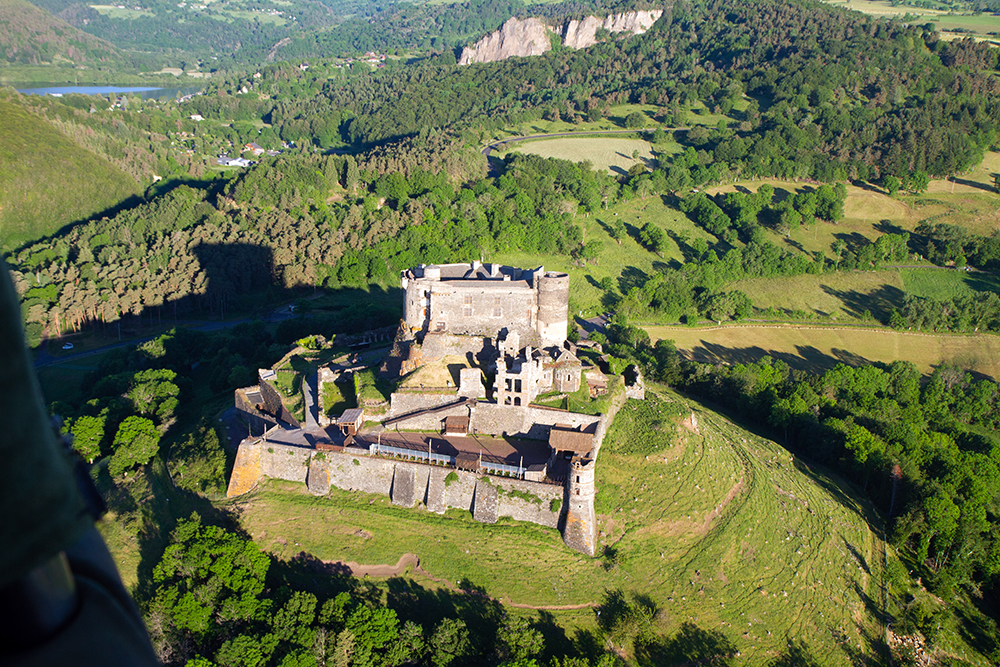 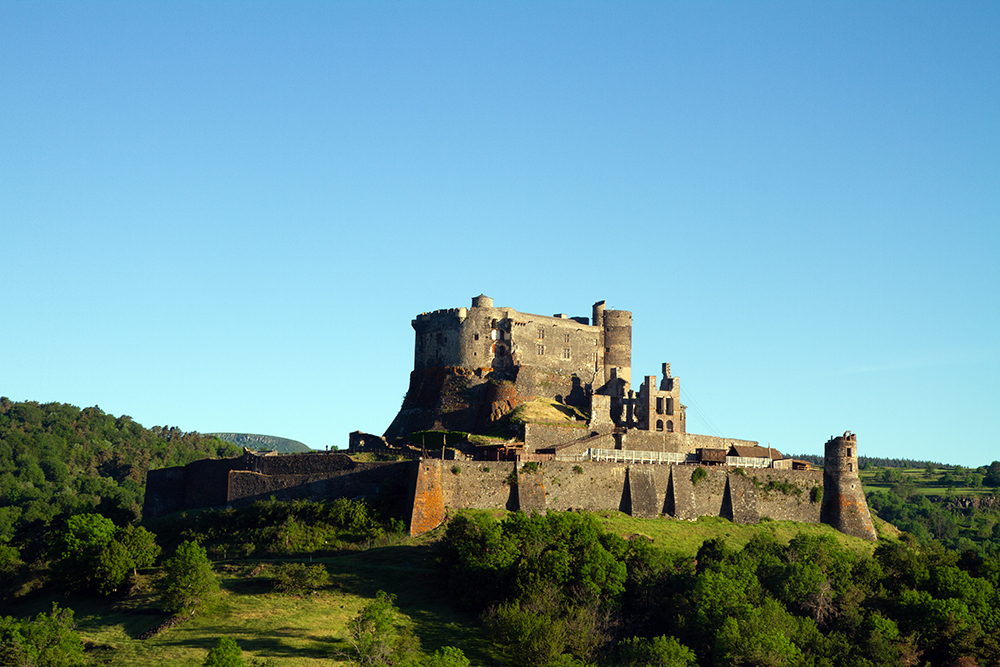 Two more shots of the Chateau de Murol.  We dropped significantly in height to become even with the chateau in order to get a favorable breeze to take us where our pilot wanted to land.  As I said earlier, there are ways of influencing where the balloon goes, to some degree, by changing altitude and we saw that clearly on this flight. 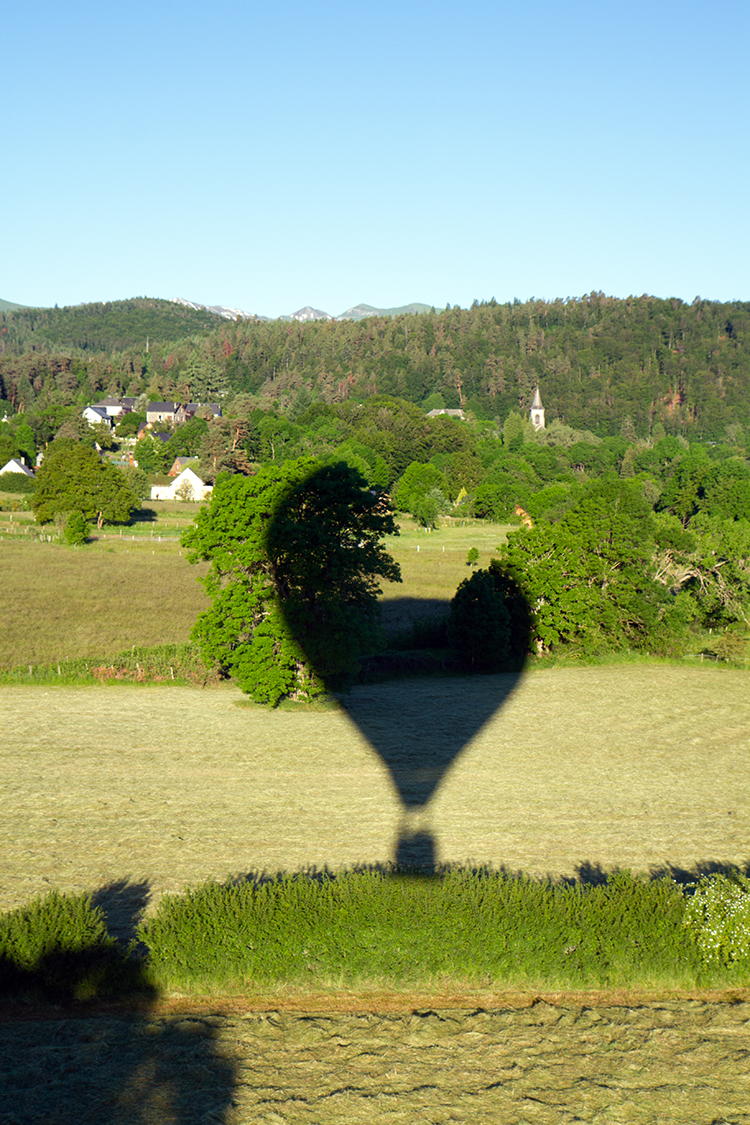 Our balloon casts a heart-shaped shadow on the trees! 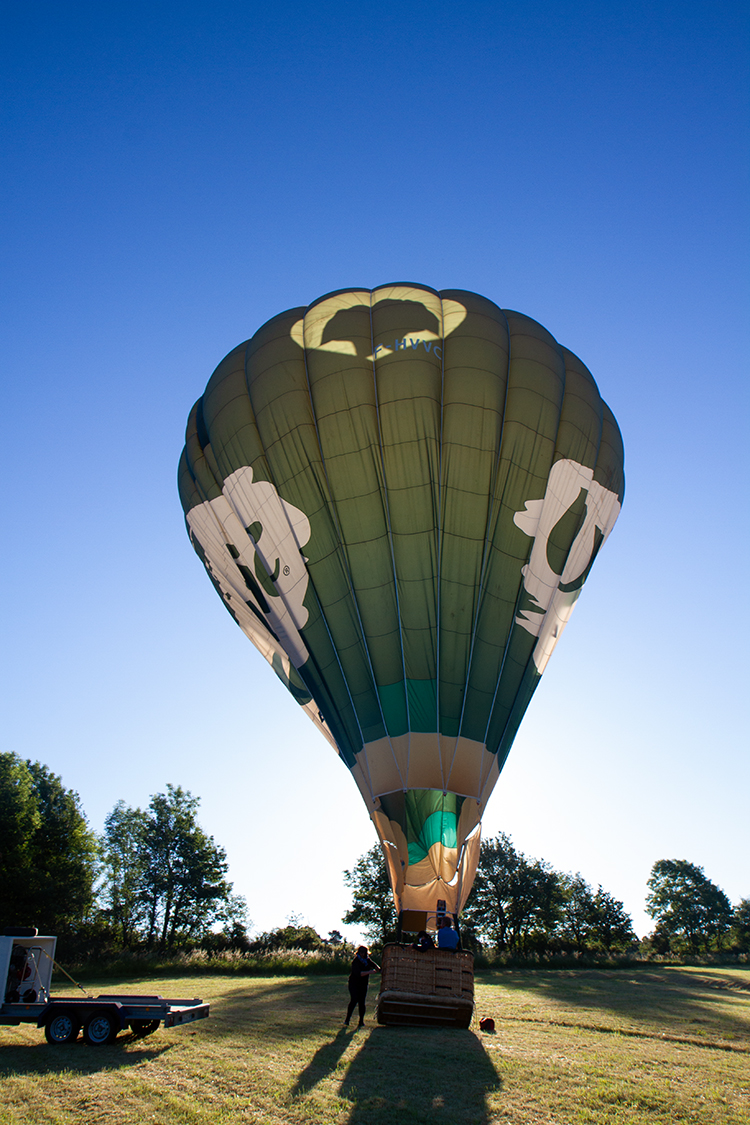 We had a very smooth landing – no pictures as we were asked to crouch down into the basket just in case the landing was not as smooth.  On my last balloon ride, we ended up on the side, but not this time.  Once we were allowed to exit the basket, I was quick to take a photo before it totally deflated.  I now realize that I do not have a single photo of our balloon fully inflated. 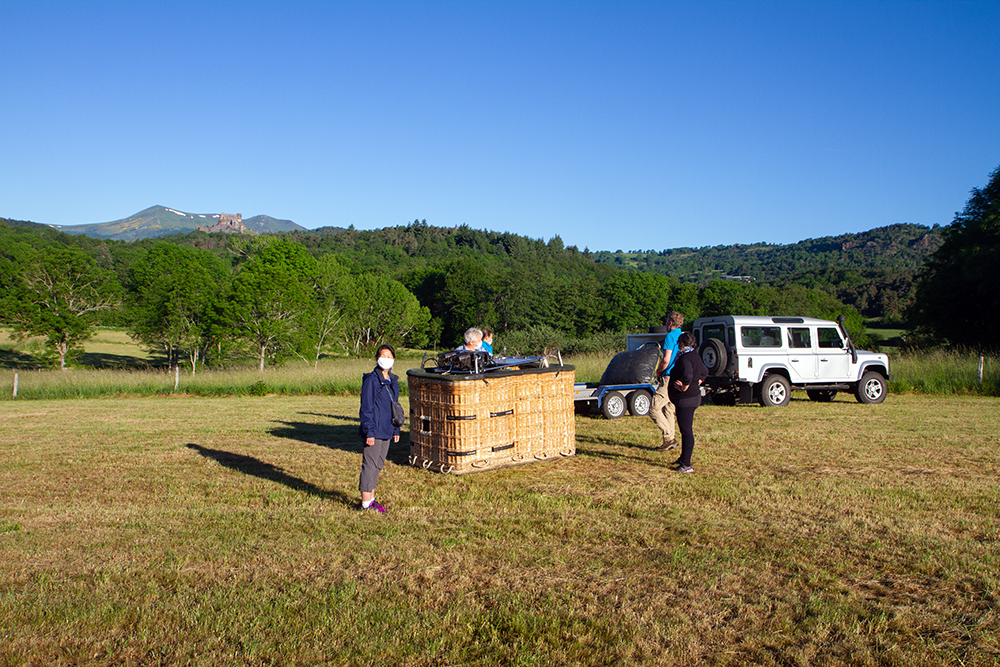 The end of a great adventure! The balloon is packed and we are now positioning the trailed so that we can lift the basket back onto it.  A short ride back to the Chambon-sur-lac will end this adventure.

I want to thank all the people at Auvergne Montgolfières who made this a great morning.  Especially our Pilot Stanislas who was very good at explaining what was happening and always willing to answer our many questions about how to fly a hot-air balloon.

I highly recommend anybody who wants to experience the pleasure of a balloon flight to contact them if they are in the region as they do a very good job.

Their site is in French – www.auvergne-montgolfiere.com

One thought on “Auvergne from above”