Yes, we went to Iowa in August 2019.  There was a very good reason for that: Bee had to drive a large farm tractor.

We also went to the Iowa State Fair and visited Madison County.  We had a really nice trip.

The tractor deal was a promise made by a friend many years before that and she did come through – her brother provided the tractor and the instructions. 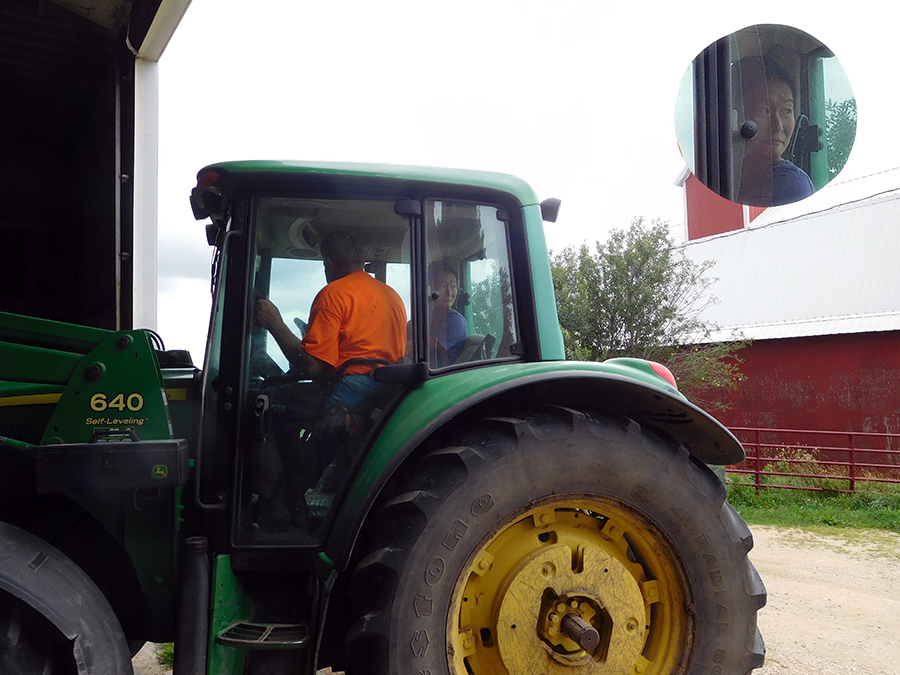 Bee was concentrating hard for the maneuver to take the tractor out of the hangar.  It would not ave been good to crash right away. 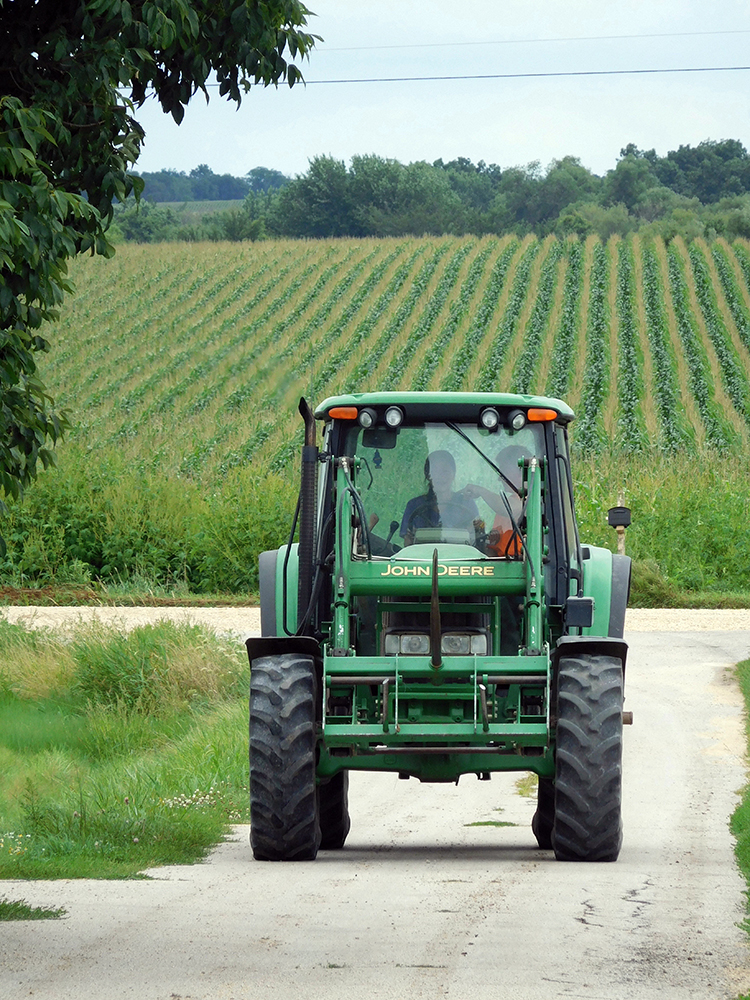 It was not a very long ride, just enough to get a feel of the “beast” and say “I did it!”  We were fascinated by the switch with a hare and a tortoise – allowed to select between high and low speed. 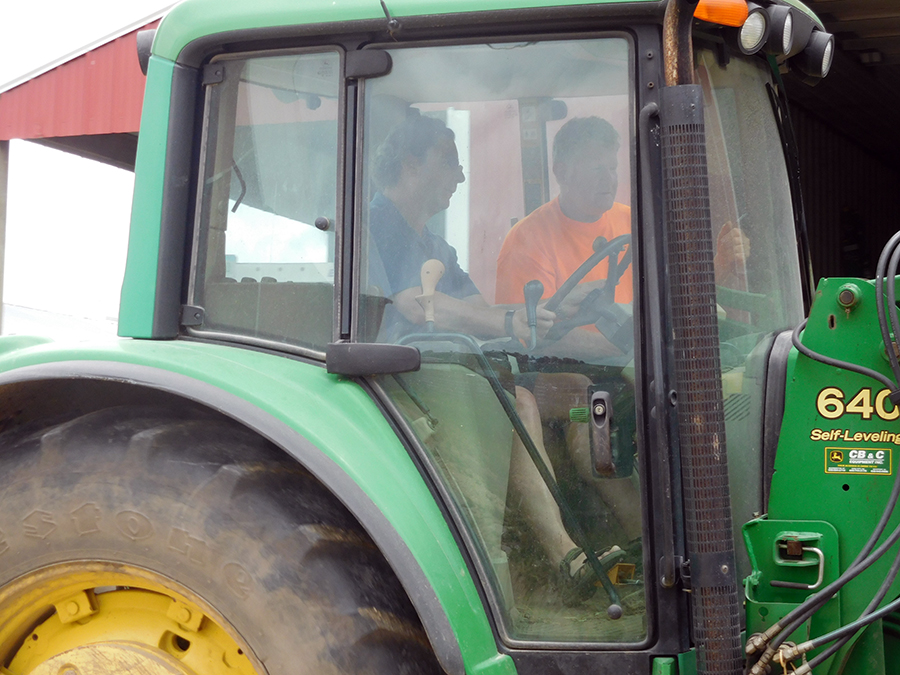 While we were there, I drove it too.  It was by far the largest tractor I ever drove.  The oldest one must have been the Porsche I drove in the 70’s in Belgium – it was over 30 years old at the time.

The State Fair was quite an occasion.  Neither of us ad ever been to one and so it was an opportunity to see a side of American Culture that few visitors see; even a lot of Americans who live in cities have never been to a state fair.  We saw lots of farm animals, a wagon driving competition, explored some very large tractors, had chicken on a stick and tasted the six wines who had won the “Best” awards that year.  At the end of the day, we saw a concert by “Foreigner” (great – but I did not care at all for the opening act!)

This was a new experience for me: the first time I did not finish the glasses that were offered in a wine tasting.  Actually I finished one out of the six that was drinkable – the other five were way, way too sweet for my taste.  Later on during this trip, we went to one of the wineries in Madison County (The Covered Bridge Winery) and found very nice wine.  We started talking with the Winemaker and he reminded me that in judging wine, one has to differentiate between wine that one likes, and wine that is well made.  The wines that win the competition are very well made, but maybe not in a way that I like; that is a good point that I had not thought about before.  From that point on, I am now saying “I do not like that wine” rather than “that is not a good wine”.  Apparently people in Iowa prefer sweeter wines and most winemakers will make a sweeter wine to please the local palate – surprisingly enough, they do not make wine to please just me and I have to accept that.

After two days in the Des Moines area, we decided to move to Winterset, in the middle of Madison County where we had booked at the beautiful Heavenly Habitat Bed and Breakfast.  More on that at the bottom of this post.  On the way, we stopped at the Living History Farms – a large park where life in Iowa 100-150 years ago has been recreated with some original buildings.  We had a very interesting visit starting with the farms which are only reachable by taking local transport – a cart pulled by a tractor. 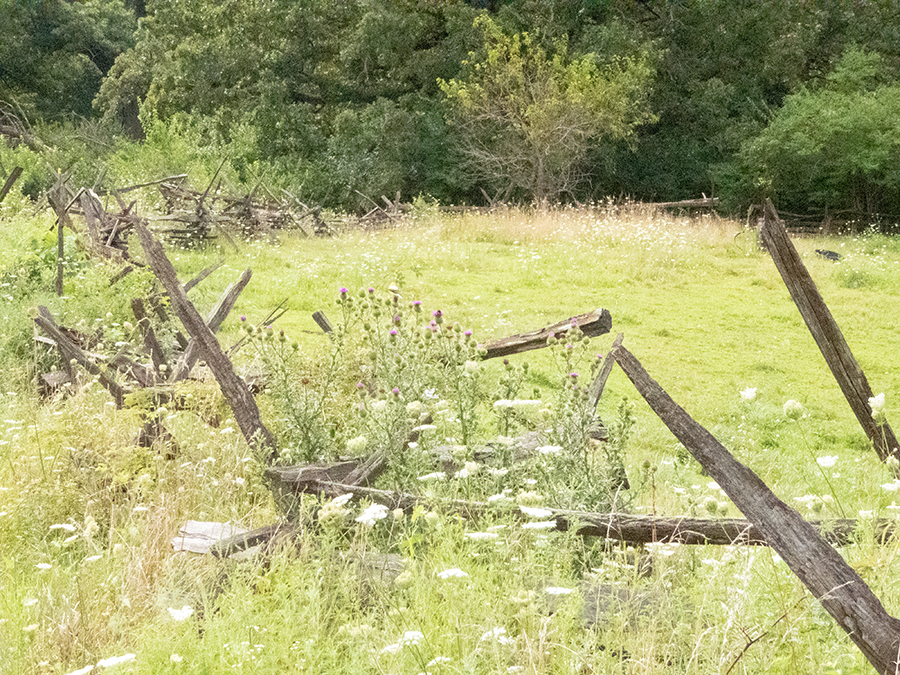 We went for a walk in the fields and saw this fence overgrown with wild flowers – very simple way to separate fields if you do not need barbed wire to keep animals in or out. 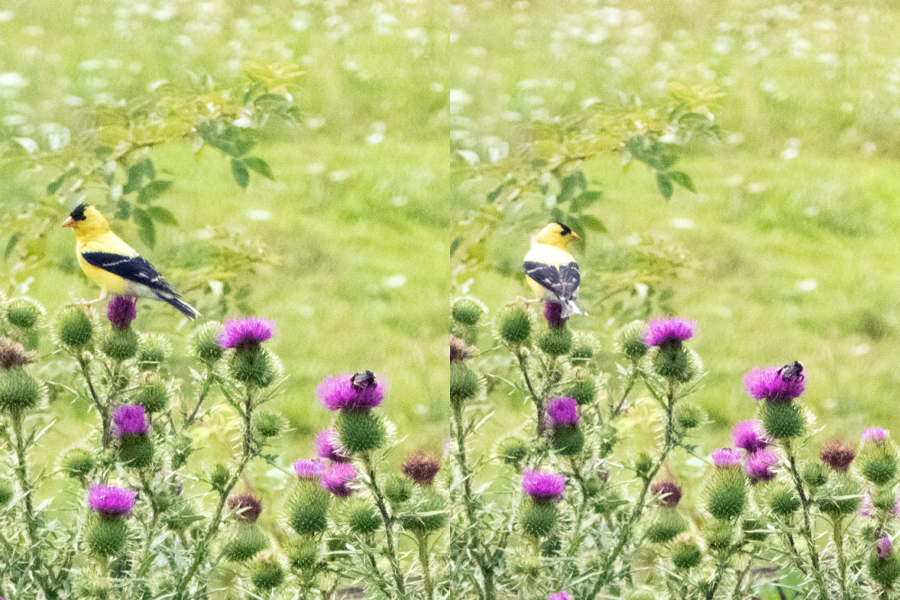 Not far from the fence we saw this beautiful bird who did not seem to mind our being there – or maybe he was waiting for us to leave so he could eat the bug in peace.  He is very discreet, keeping an eye on the bug, but looking distracted while doing so. 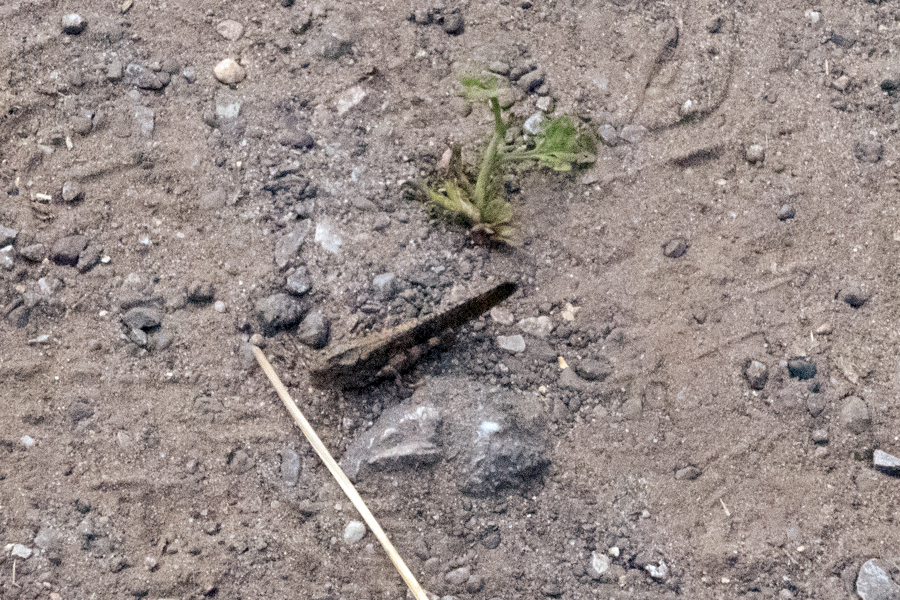 A grass hopper not on the grass.

We ended up chatting with the local “farmers” as they were going about their typical chores. 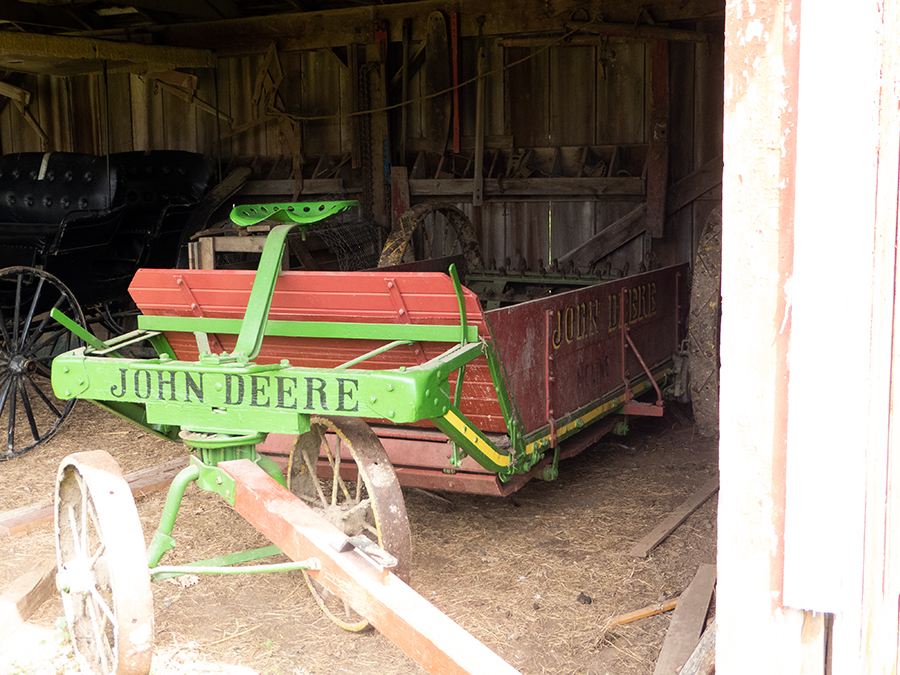 Looks like John Deere has been around for a while – it was actually started in Iowa, something I did not know.  One of their big factories is still in Iowa.  John started the company making a ‘better’ plow and slowly expanded into farm machinery. 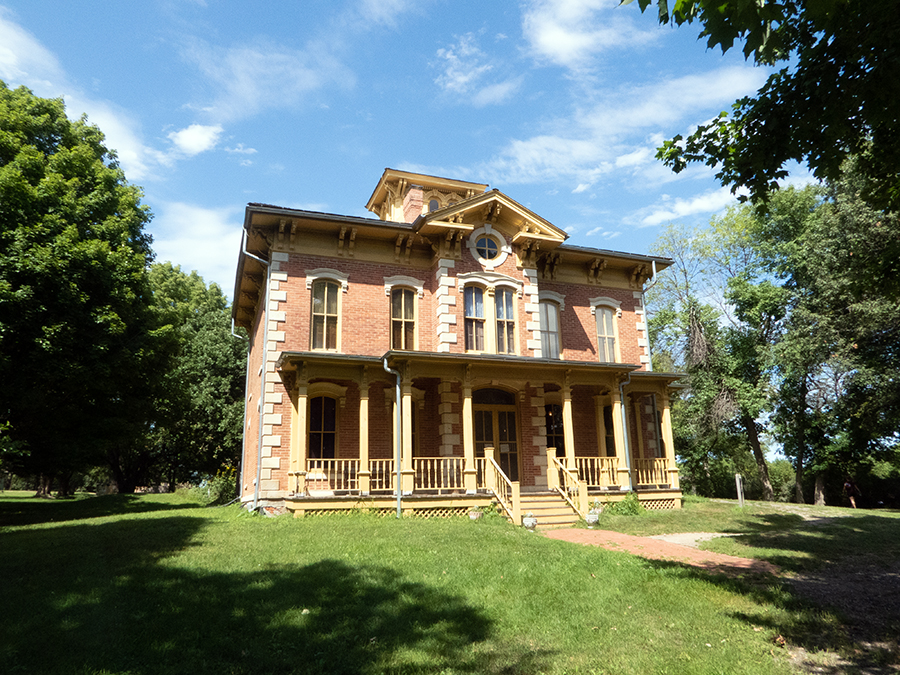 The rest of the museum is the reconstruction of a small town.  Above is the Flynn Mansion that was built there in 1870.  It would have been typical for a wealthy merchant to have a large house just outside of town.  Next to the house, there was a large barn that we could also visit.  In the town, we saw the printing shop, the general store and the doctor’s office.  In each of these, we were able to speak with the people running the establishment and they explained how things worked 150 years ago.  Our most interesting encounter was in the small church where a lady was busy working on a very large quilt.  She explained that it was not unusual for a quilt to be a community effort that was done in church – everybody would help and pitch in whenever they had a chance.  It was also an opportunity for the ladies in the community to spend time together gossiping.

If you are as old as I am, you must remember the 1995 movie called “The Bridges of Madison County”.  You might even know that it was first a novella written by Robert James Waller in 1992.  We spent two days travelling around the county where there are 6 covered bridges left (there were hundreds in Iowa in the early 1900). 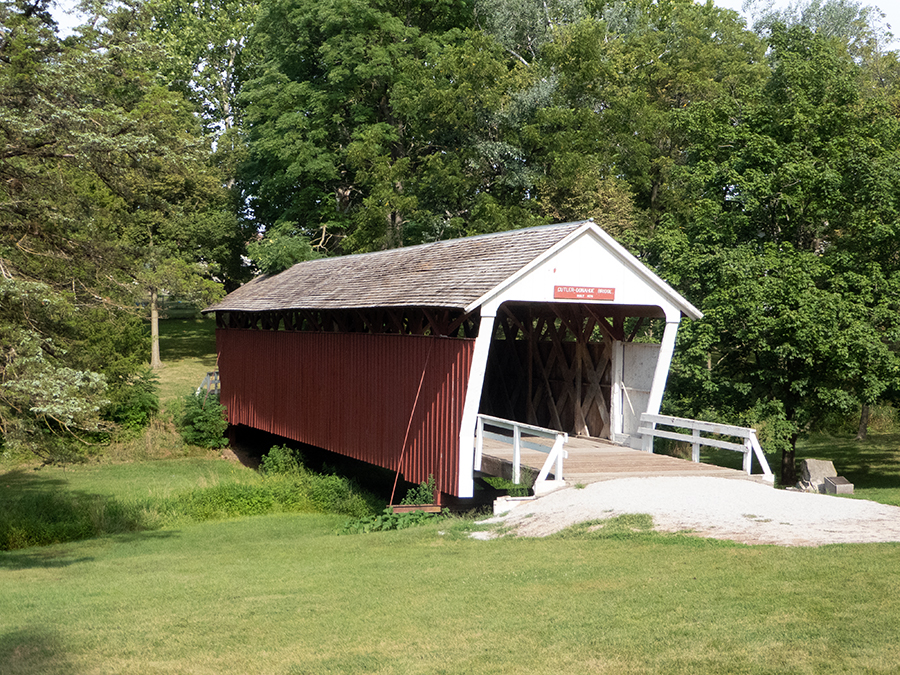 We started with the Cutler-Donahoe bridge above, located in the City Park just on the outside edge of Winterset.  It was also a good opportunity for a walk and we also went to see the Clark Tower.

There was no plaque so I will have to tell you here about the history of this bridge.

Built in 1870 by Eli Cox, the Cutler-Donahoe bridge is 79 feet in length and features a pitched roof. Originally located over the North River near Bevington, it was moved to its present site in Winterset’s City Park in 1970. Cutler-Donahoe was renovated in 1997 at a cost of $35,538. 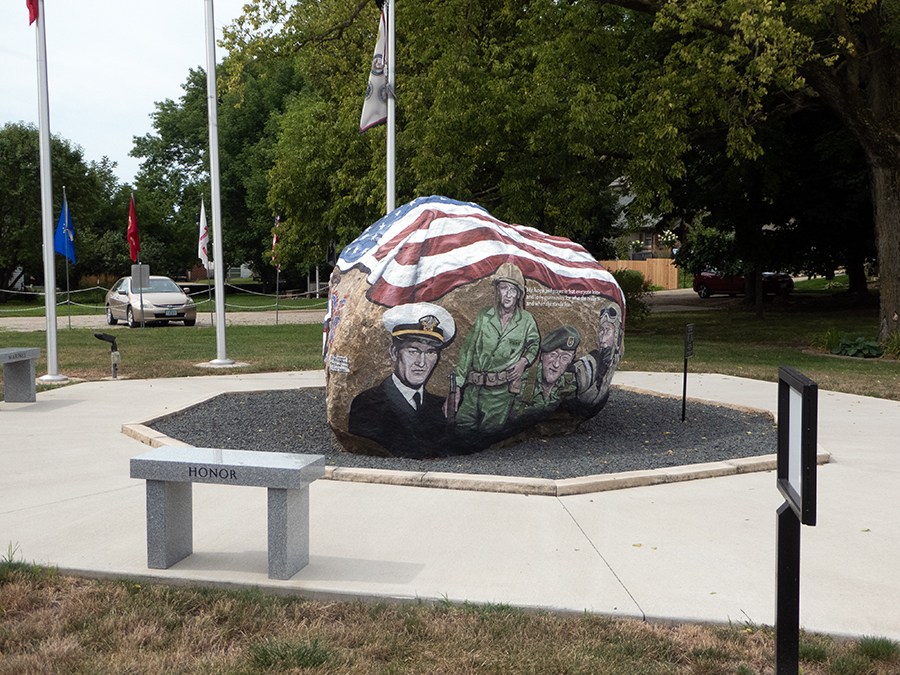 We found this very interesting commemorative rock called the Winterset Freedom Rock.  All services of the armed forces are represented, and John Wayne, the local boy, is shown in different uniforms he wore in several of his movies.  The rock is located behind the John Wayne Birthplace Museum – yes, he was born in Winterset, IA. 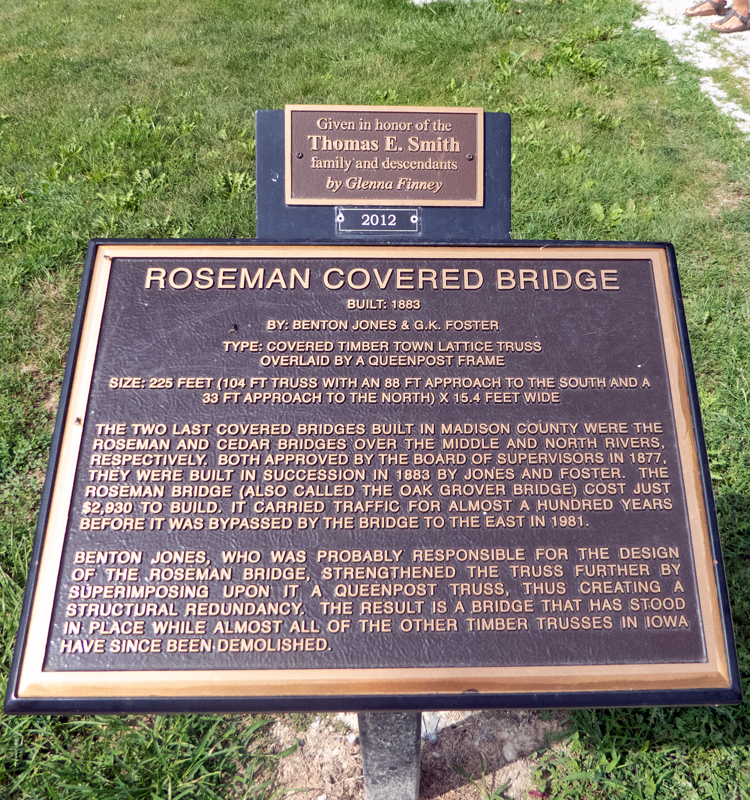 Our next stop was the Roseman Bridge.  Most of these bridges are now in isolated places, reachable on narrow roads and are reduced to pedestrian traffic only, usually not leading to anything on  the other side. 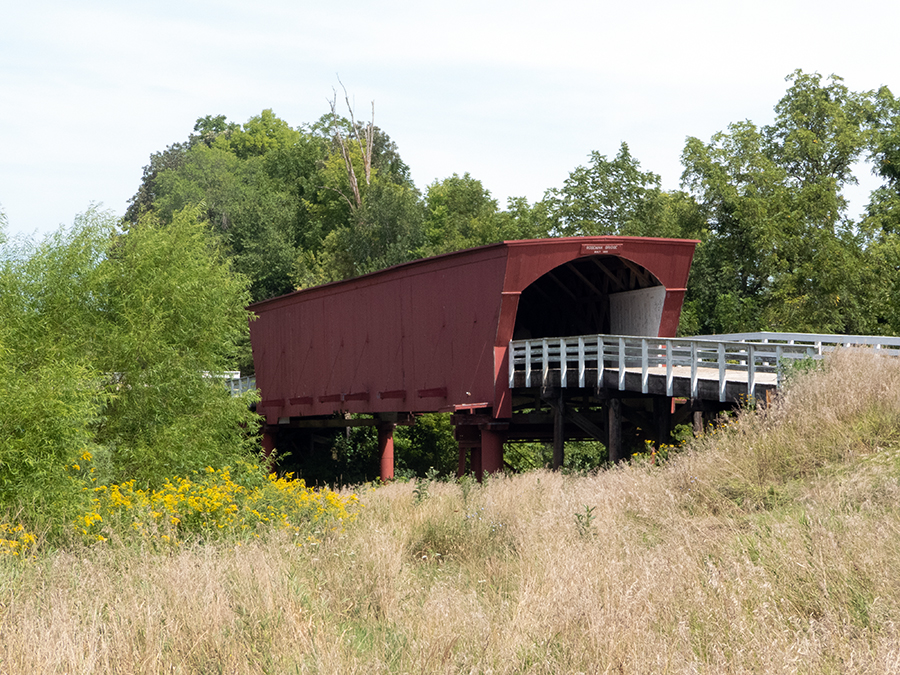 They appear to be universally painted in brown and white, or white and brown. 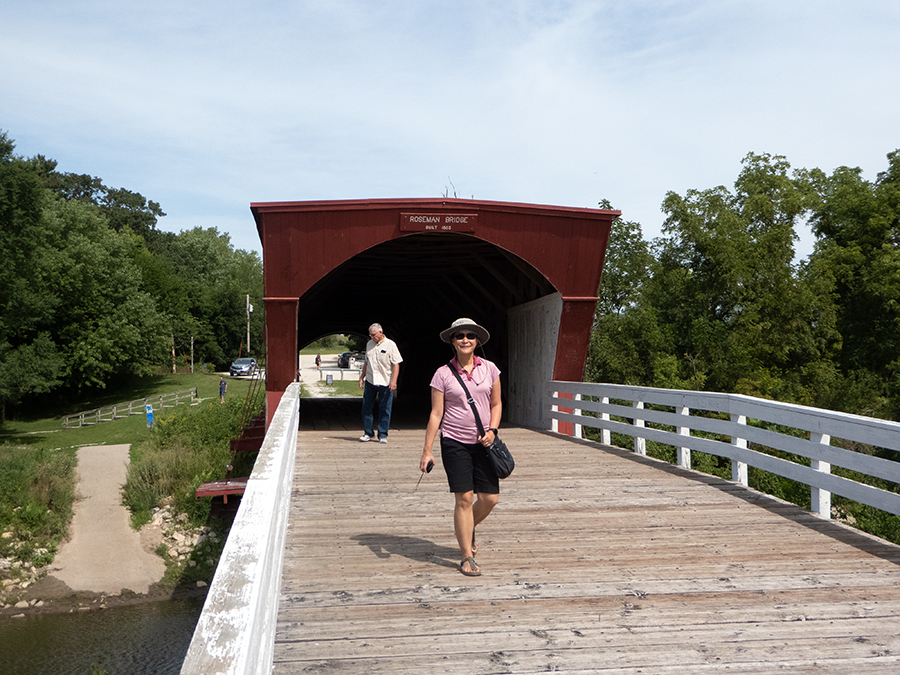 They are local attractions, but even in the middle of August, we did not run into too many other people. 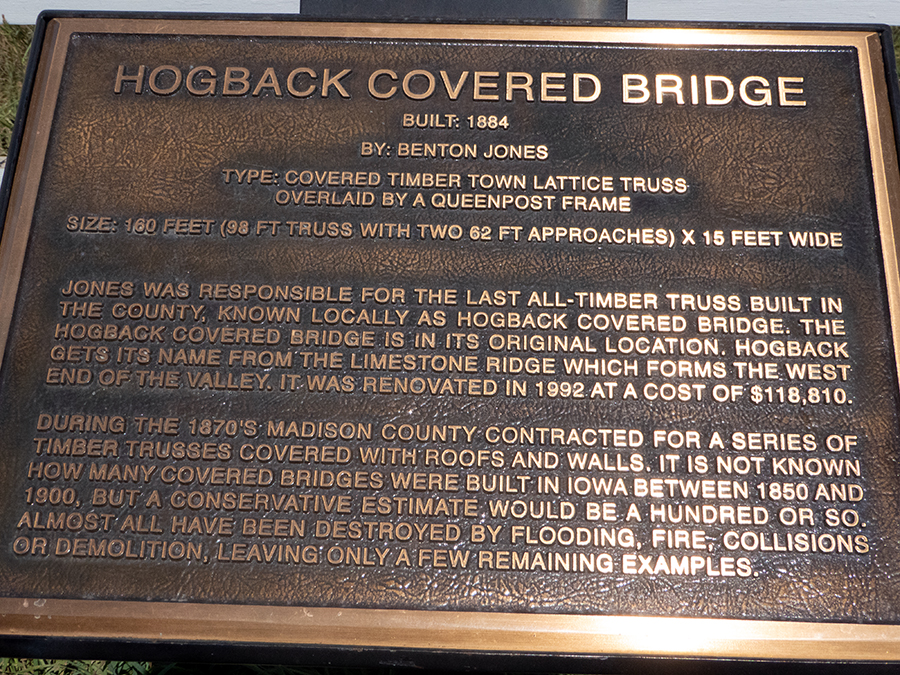 I am now glad that I photographed the commemorative plaques in front of each bridge.  It helps me to know which photo goes wot which bridge since they all very much look alike. 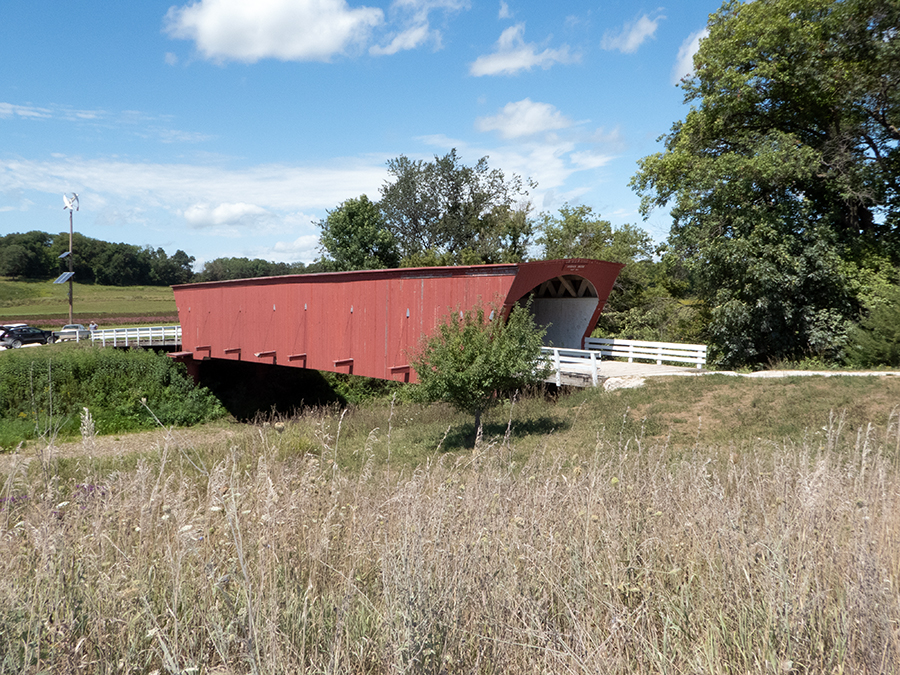 We were lucky to be able to do this on a particularly sunny day. 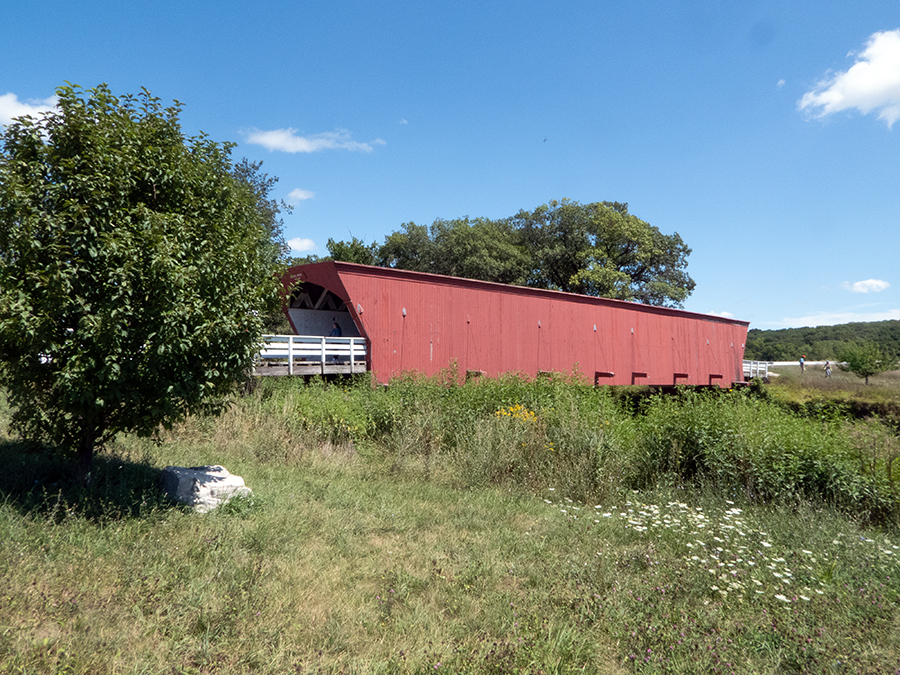 While visiting the bridges we also had a very nice tour around the county. 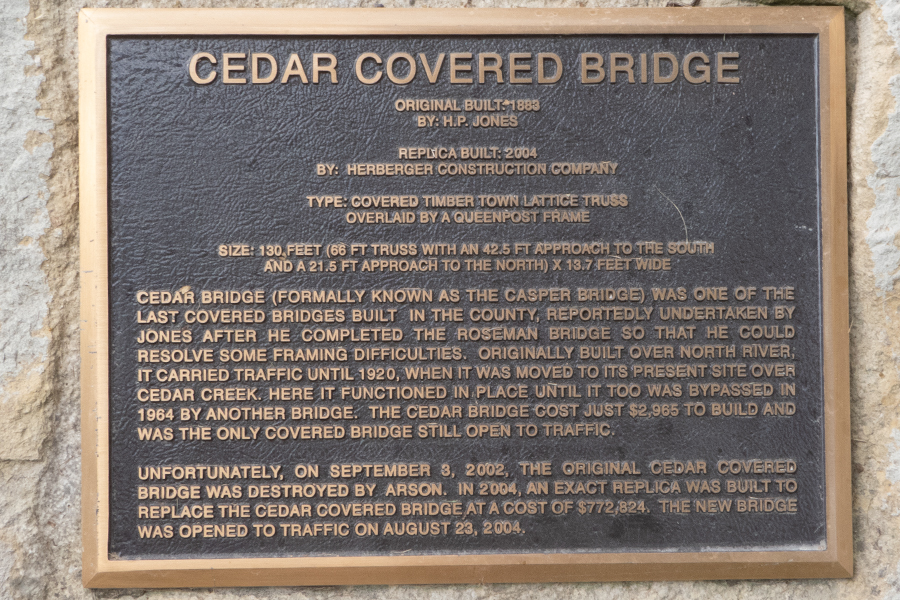 Unfortunately, not all bridges survived.  As the plaque tells it, this one burned down in 2002 but was fortunately rebuilt. 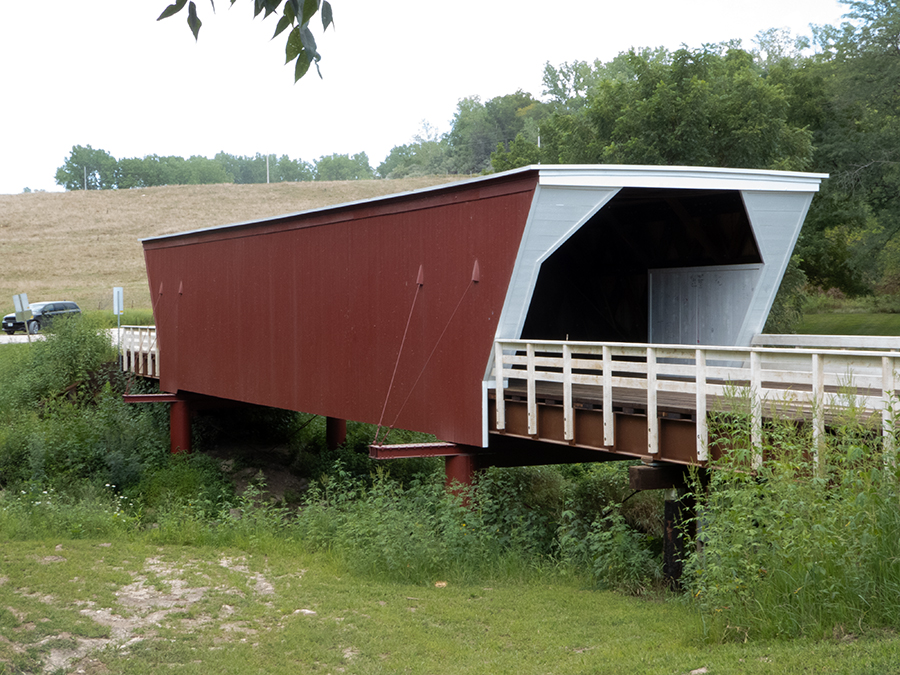 It is also the only bridge that you can still drive across – we did not do that as we did not need to go to the other side of the river. 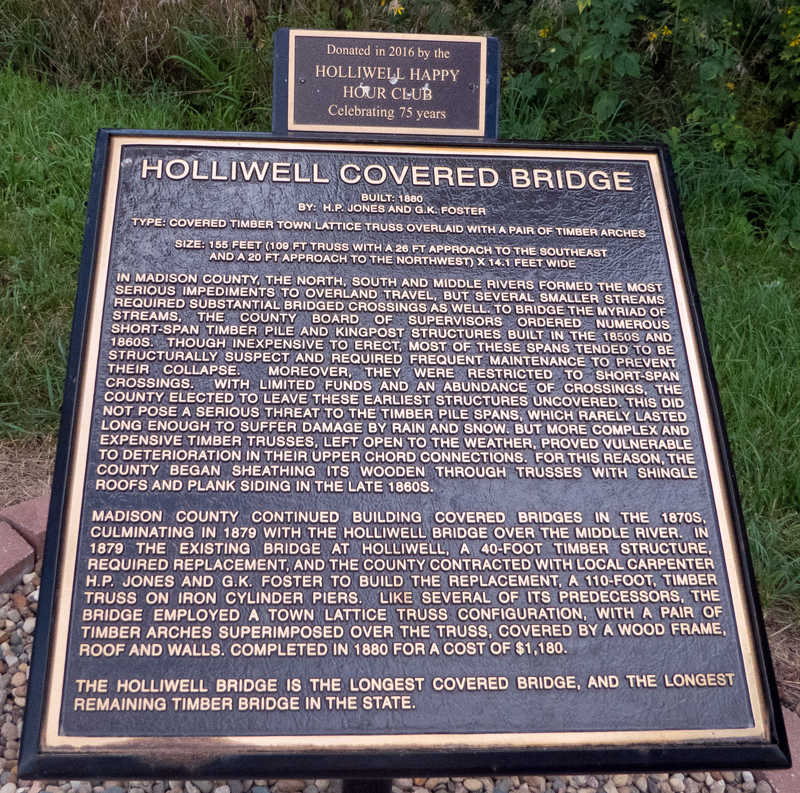 In case you are not going to read te sign to the end (why do I even put these if you do no read…) it says that this is the longest remaining covered bridge and longest timber bridge in the state.  Not Bad! 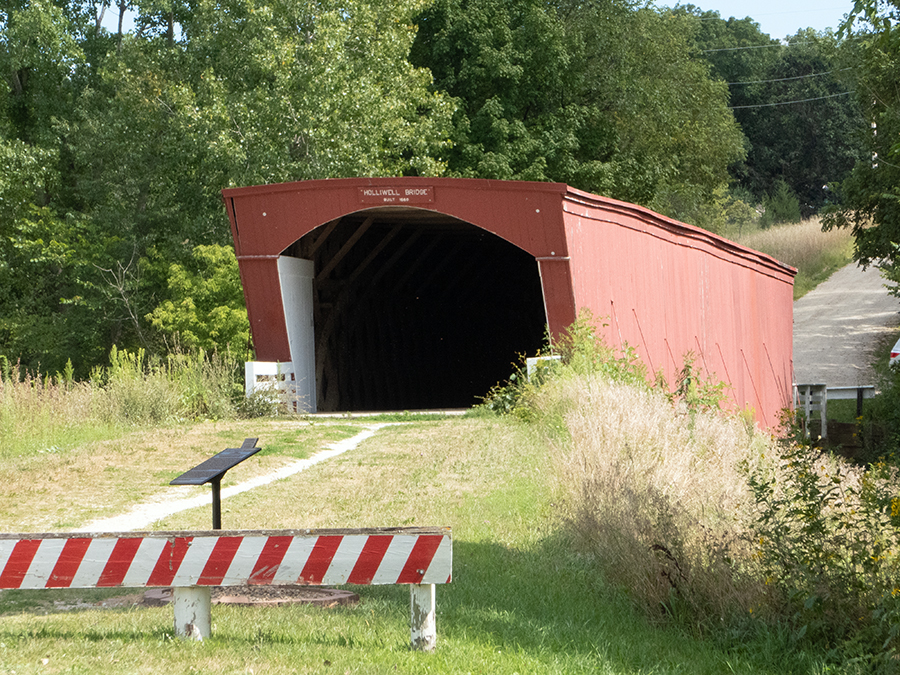 It is very nice from both sides. 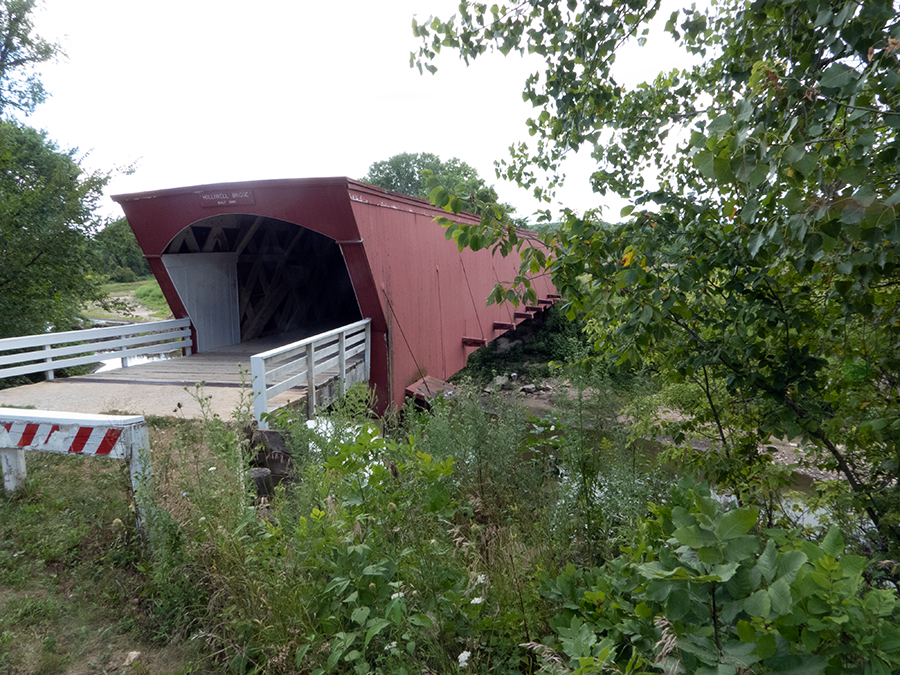 There is to me something special about a well built bridge. 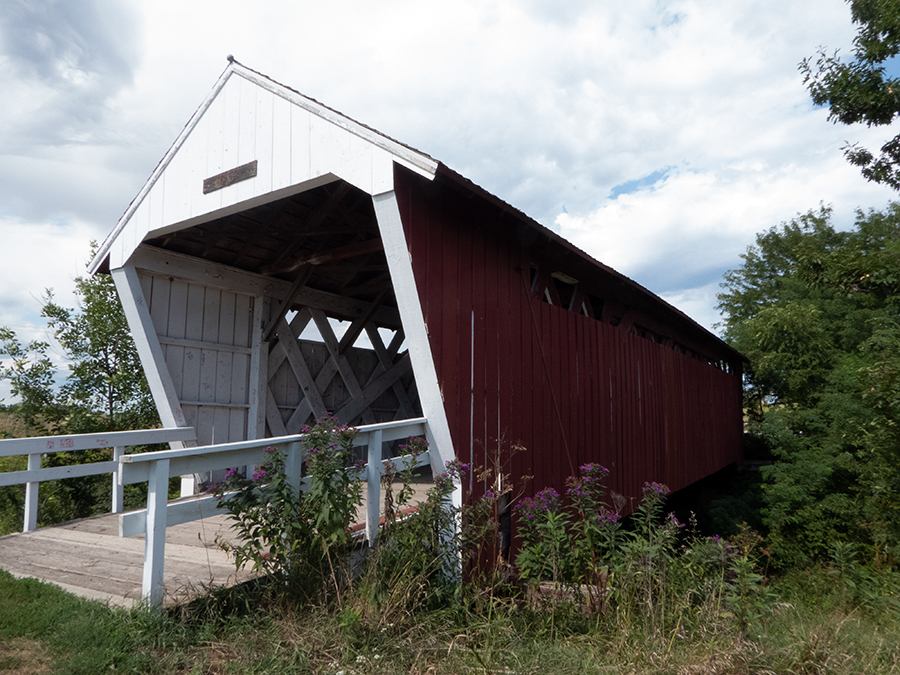 This is where it gets dicey, as there is a switch I am not sure about between the Holliwell bridge and the last on on the list, which also did not have a plaque.

As this one has a white front, I believe the shot above is of the Imes Covered Bridge 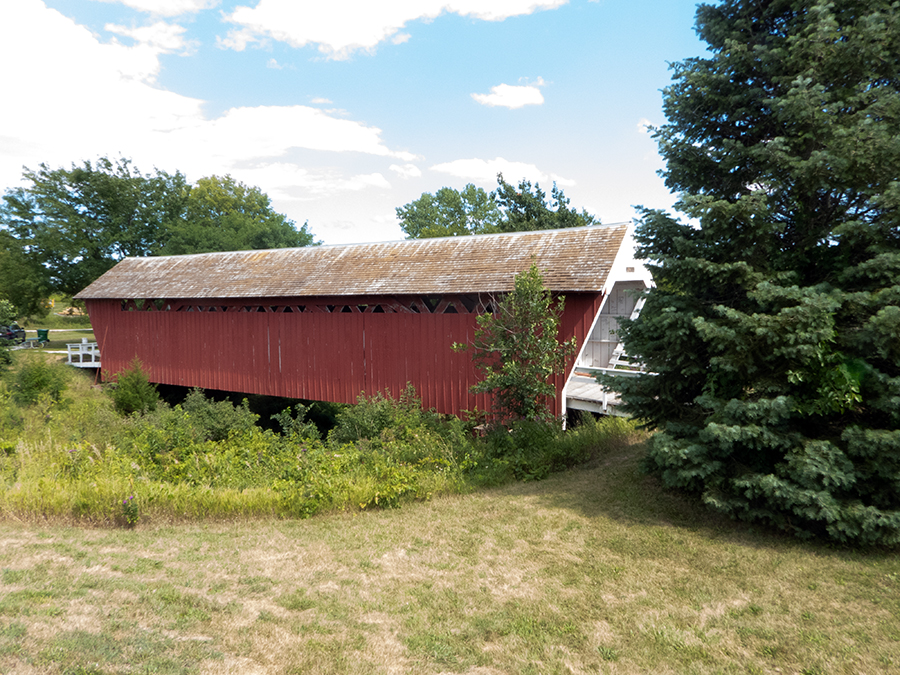 The oldest of the remaining covered bridges, Imes was built in 1870 and is 81 feet in length. It was originally located over the Middle River west of Patterson. In 1887 it was moved to a spot over Clinton Creek southwest of Hanley. Imes Bridge was moved again to its present location over a natural ravine just east of St. Charles in 1977. It was renovated in 1997 at a cost of $31,807.

This is a well traveled bridge!  Good thing that the trusses and support are so solid. 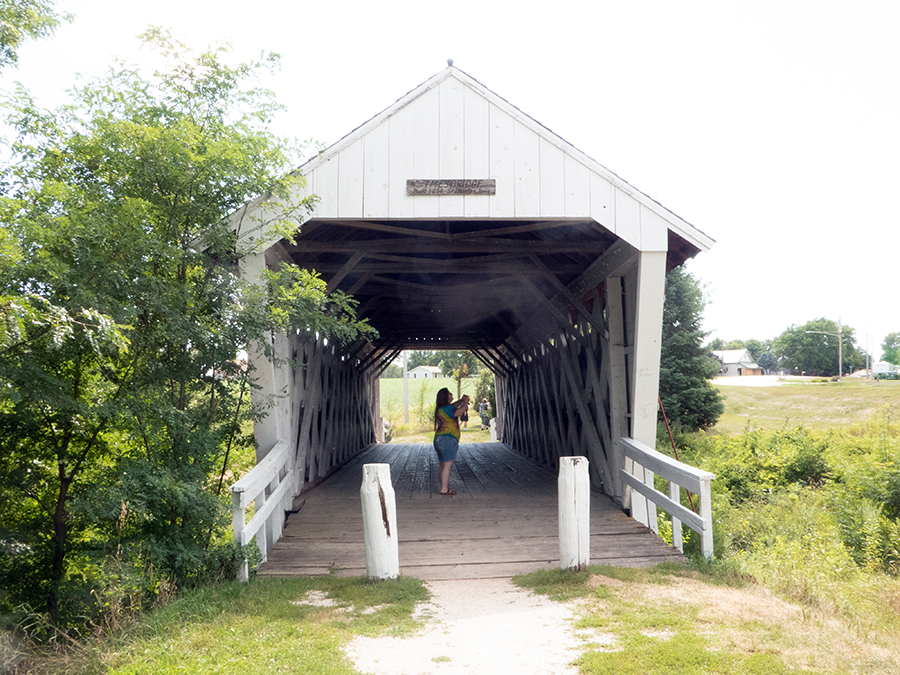 That is the last of the remaining bridges in Madison County.

On our last day in Iowa, on the way to the airport, we stopped in Amana, just to see what it was like.  We had a very interesting time and ate well at a local restaurant. 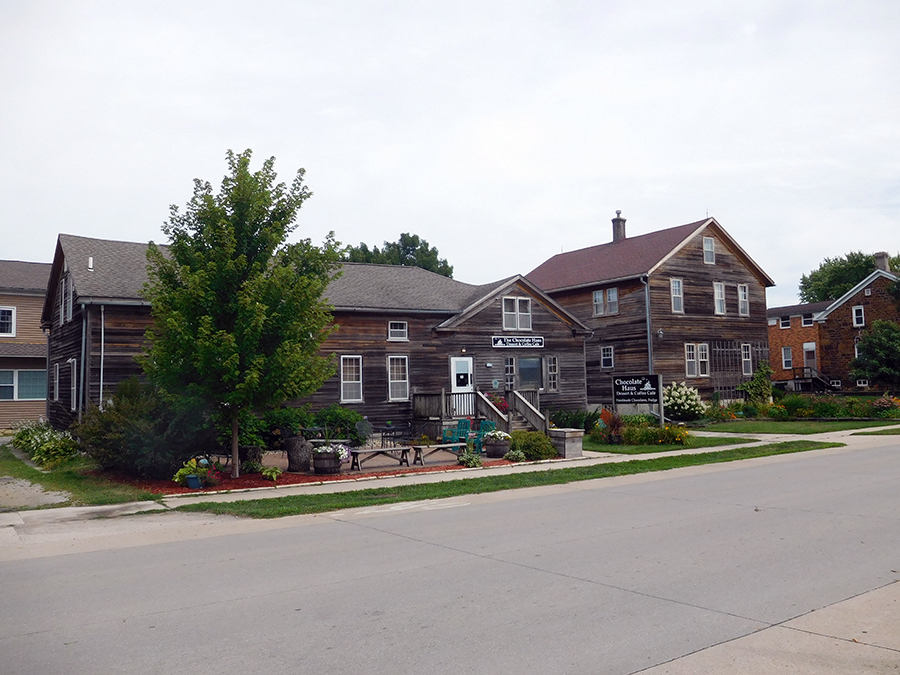 If they have a chocolate haus, I can live here … 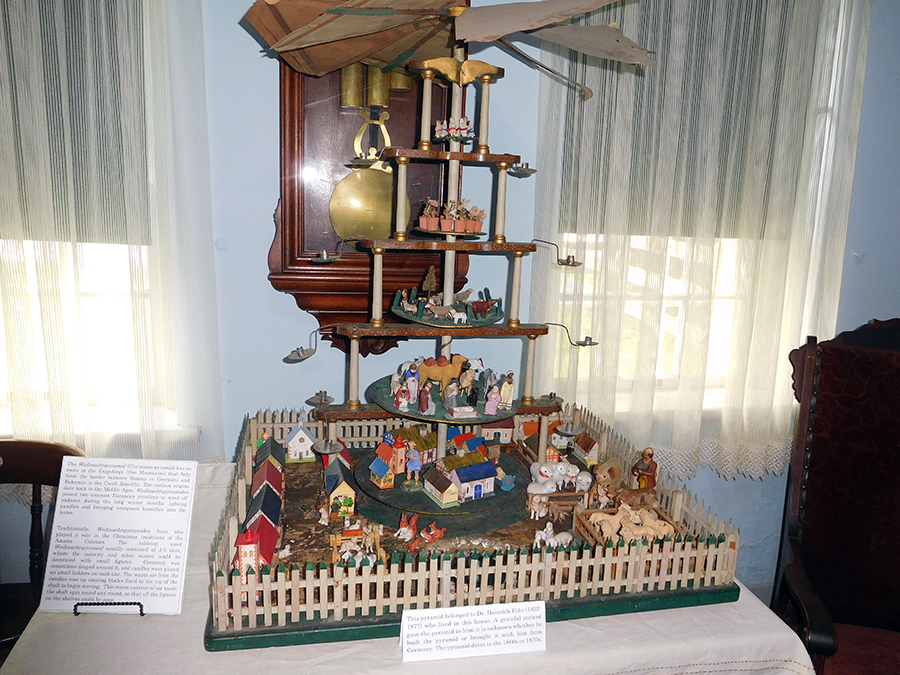 We saw this in the local museum.  This type of carousel is a typical decoration in Germany for Christmas – it operates with the hot air from several candles – however, this one is bigger and more elaborate than any I had seen before.

Here is additional information on the places we visited:

located just on the outskirts of Des Moines, on the Western side.

right in the middle of Winterset – built into a former church with absolutely charming hosts.

The Covered Bridges of Madison County

They have their own website too: www.madisoncounty.com/the-covered-bridges – it is a good place to start if you want to go there.

It is a great place to visit – the winemaker is very friendly.  They host regular evening concerts (we attended one and had a great time).

And, oh by the way, they also make good wines.

One thought on “Iowa in August”