In 2004, while I was living in Baton Rouge, I decided to stay home for Christmas.  My parents were coming and spending New Year with me, but I was free on Christmas Eve.

Somebody told me about Bonfires on the Mississippi levees around Lutcher and Gramercy so I decided to check it out.  At the time, I was still using film, but the company I used to develop the film had a special offer to put photos on CD and I took advantage of it.  I therefore had saved digital versions of the photos from this first visit – not necessarily the best quality, but good memories.

I arrived a few hours before the fires were lit, and was amazed at some of the constructions.  This is a log cabin that was fully equipped inside, with tables, chairs and dummies.

The ghost that you see in front of the photo is the result of a technique I used with my film camera when I was faced with a crowd.  I would put the camera on the tripod and take several super-imposed shots without winding the film.  Since people move, only the fixed objects that I am trying to photograph are clearly visible.  Here, I probably only took 3-4 shots. 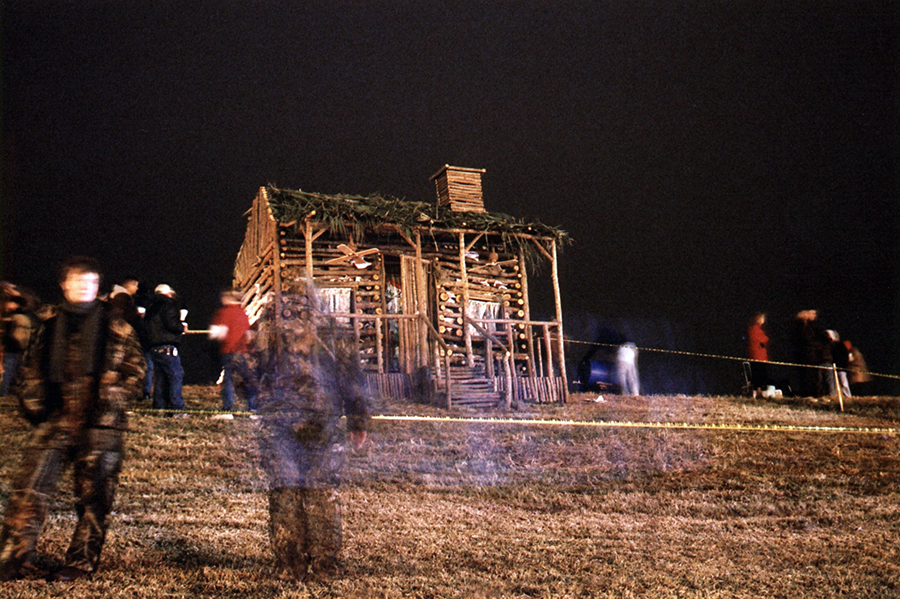 At 7 PM, the fires are lit, and there are fireworks, by individuals.  Some of the fireworks are quite nice – I have no ideas how much money people put into these. 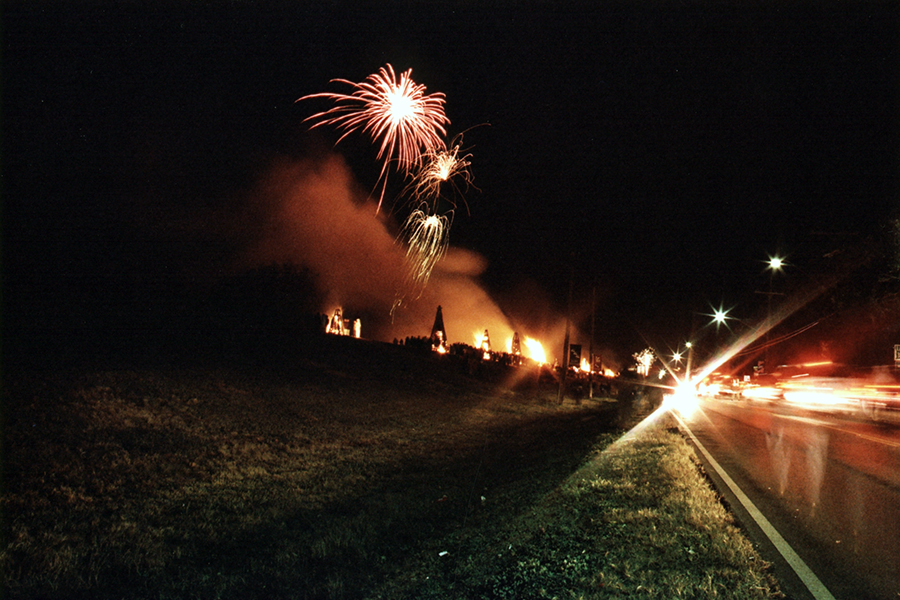 There were quite a few people, but it was not crowded.  Even the River Road was not totally jammed. 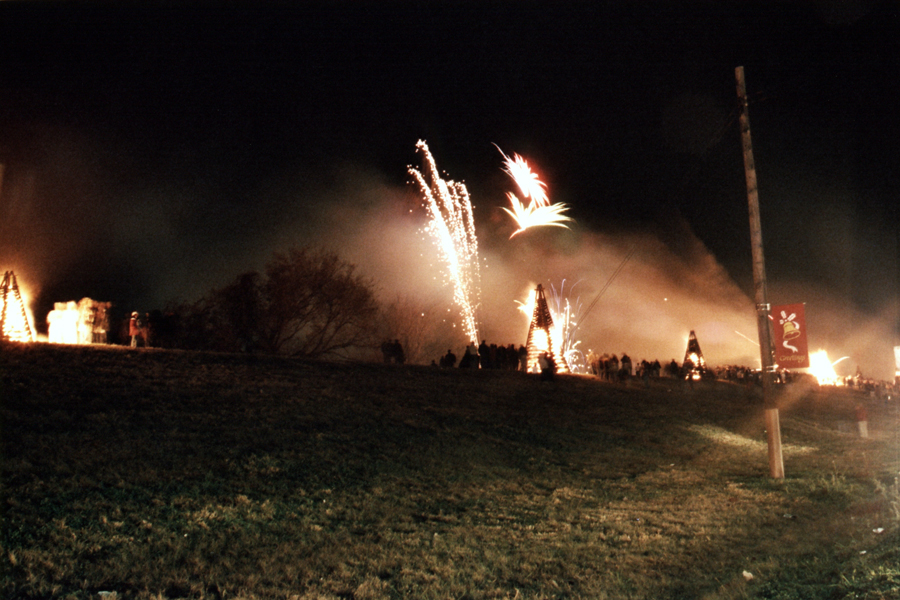 The majority of bonfires are pyramids that tend to burn quite well. 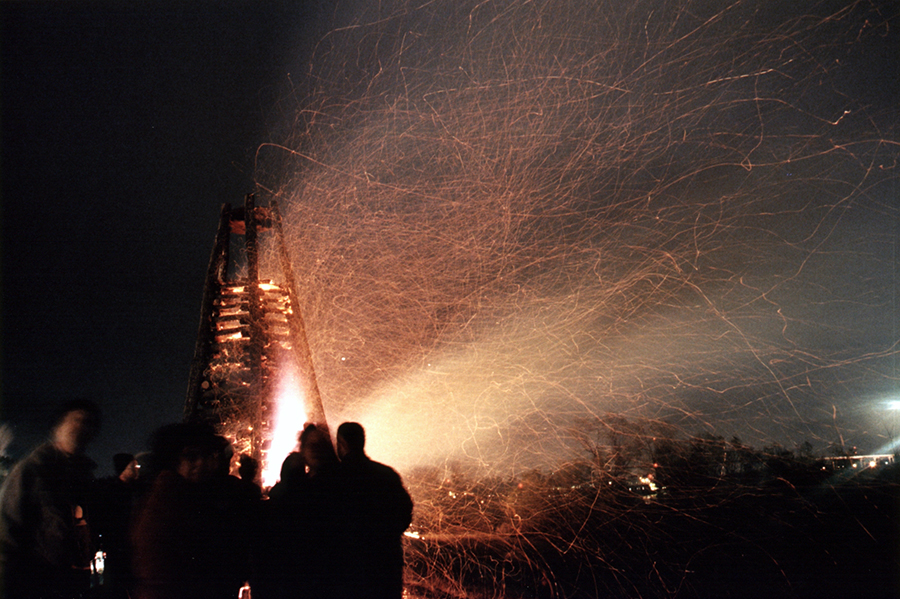 I like the movement of the embers in this photo. 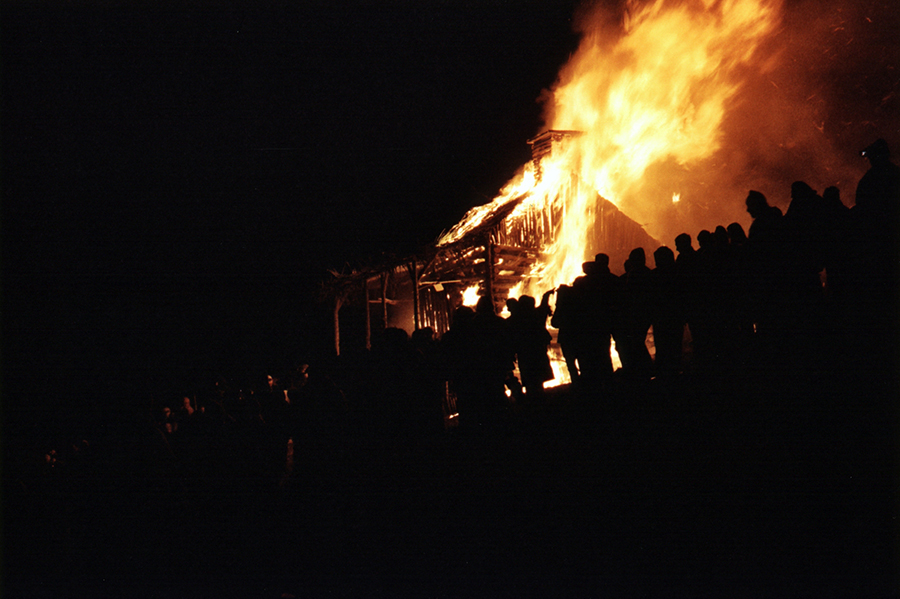 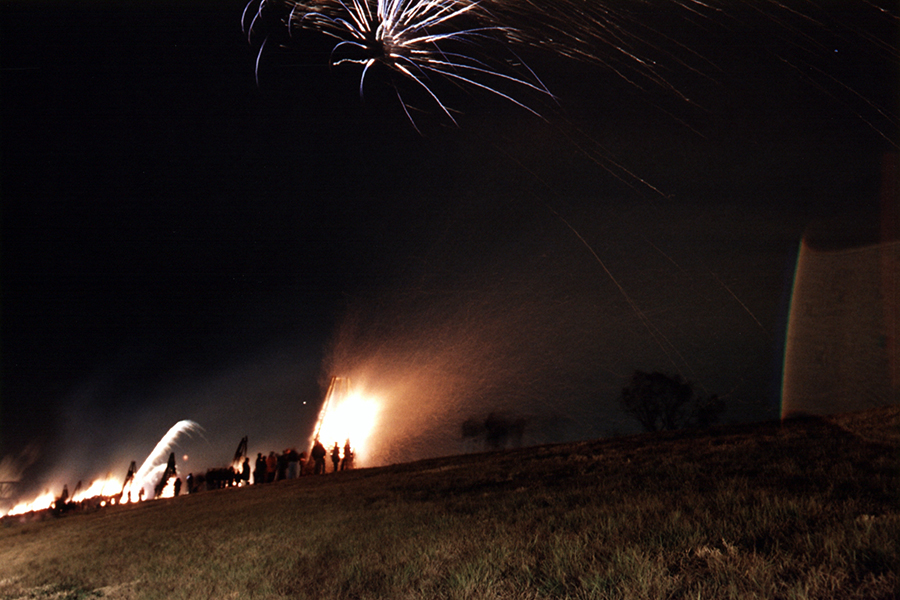 As I remember, it was a very pleasant evening.

Last year, Bee and I decided to do the same, part of the reasons why we decided to spend Christmas in New Orleans.  We were told that the crowds had significantly increased in the last few years and people told us to arrive early.  We left NO around 3 PM and arrived at our first stop about 4 PM.  A family had build a 65 ft alligator on the levee (I did  not measure it – there are articles that mention anything from 25 to 85 feet but the majority seems to agree on 65 ft).  There was quite a crowd looking at it when we arrived. 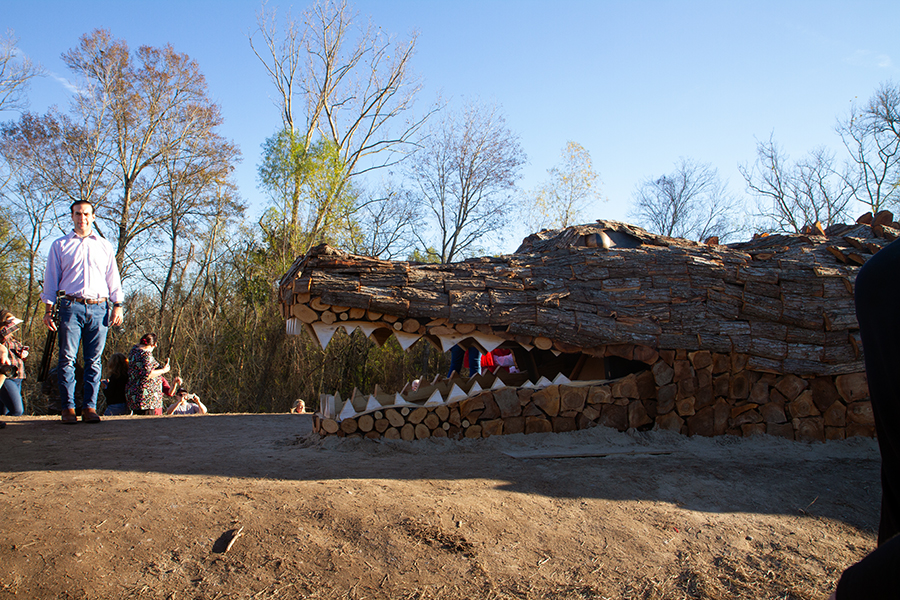 The mouth is impressive, and so realistic.  It was actually hinged and during the earlier part of the week, the jaws would move up and down to open and close the mouth. 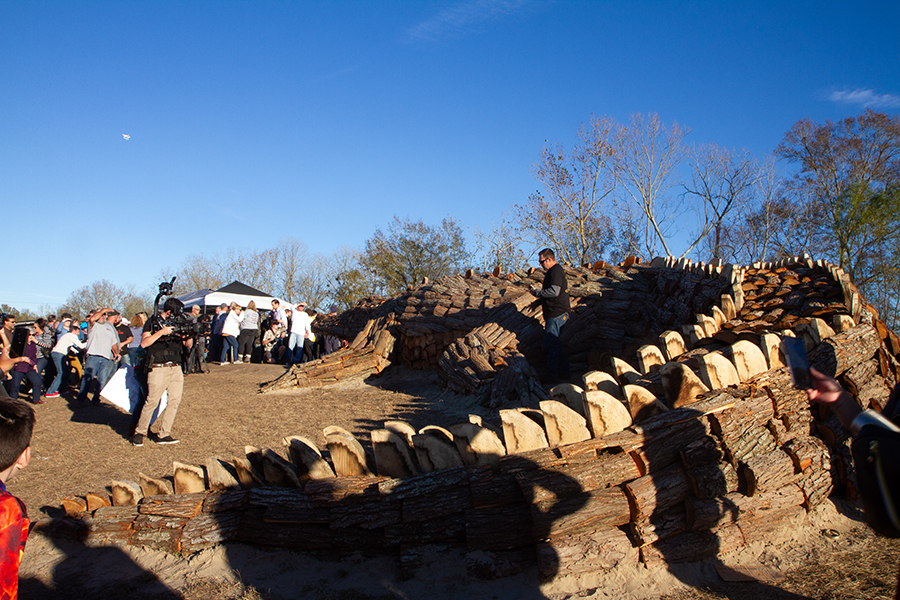 The alligator was so large that is was very difficult to get a good picture of the whole thing without a drone.  I like the spines on the tail.

You can check this link: https://wgno.com/news/only-in-louisiana-massive-25-foot-alligator-bonfire-built-on-mississippi-river-levee/ for details and overhead pictures. 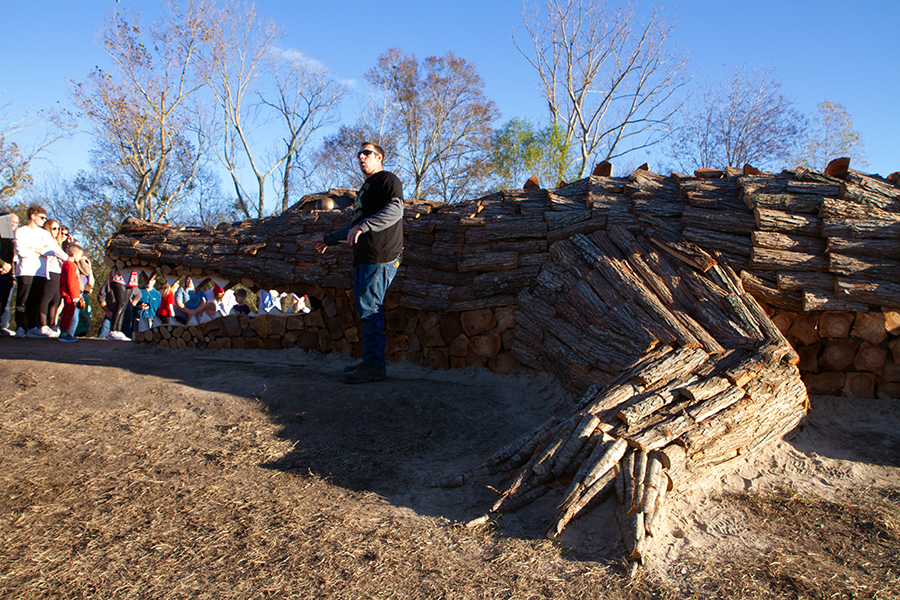 While we were there, the lead builder was interviewed by a local TV station and that is how we learned a lot about how it was built and why.  This same family does a bonfire in this location every year, and every year they do a better/bigger bonfire than the last year, and than anybody else.  They are unfortunately located several miles from the main area where 190 bonfires are aligned on the levee around Lutcher and Gramercy.  We headed there next and therefore did not see the Alligator go up in flames. 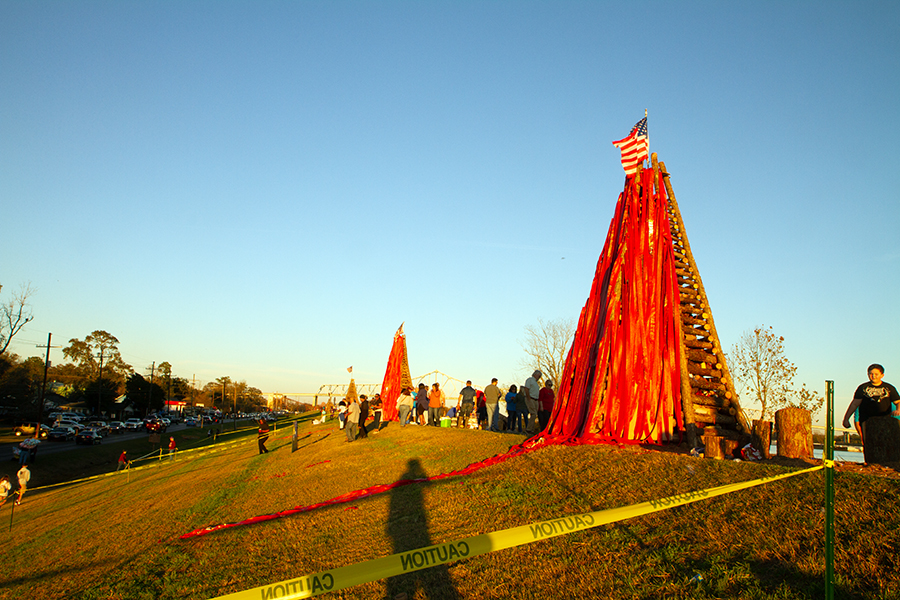 Just a bonfire is not enough any more.  The lighting of the bonfire has to be spectacular and therefore thousands of firecrackers are attached to the frame and are lit first.  We stopped by and chatted with the people who had built these two bonfires.  They lived across the River Road and were having a party for friends; after talking with them for about 10 minutes, I guess we became good enough friends to be invited to join them at their house later where food and drinks were on offer.  We decided to move on and explore more fires. 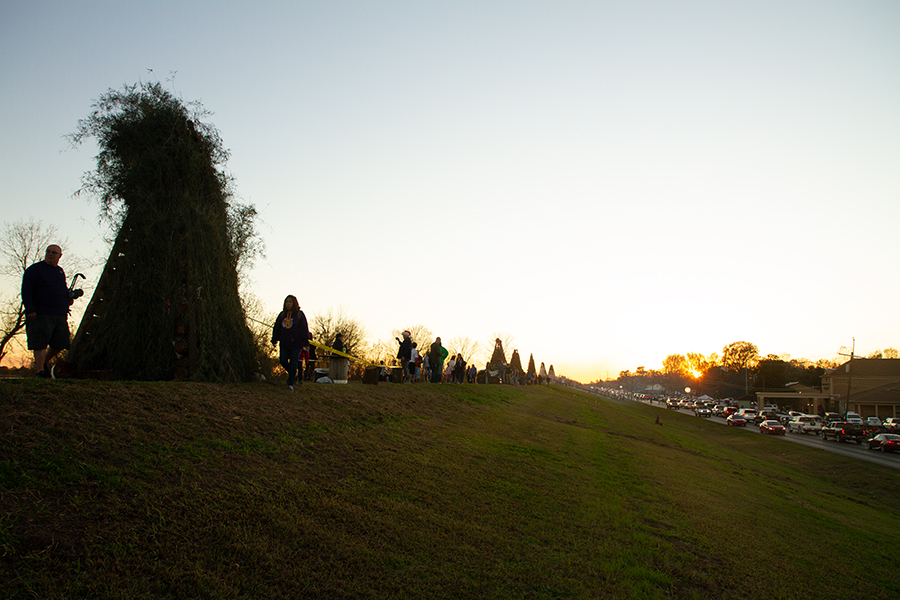 As the sun started to set, the finishing touches were put on the various bonfires.  Most are built be a single family that has been doing this for years and often generations.  They come back each year to the same spot to build another bonfire.  It takes as much as a week to build one of these – more time if you add firecrackers or other decorations. 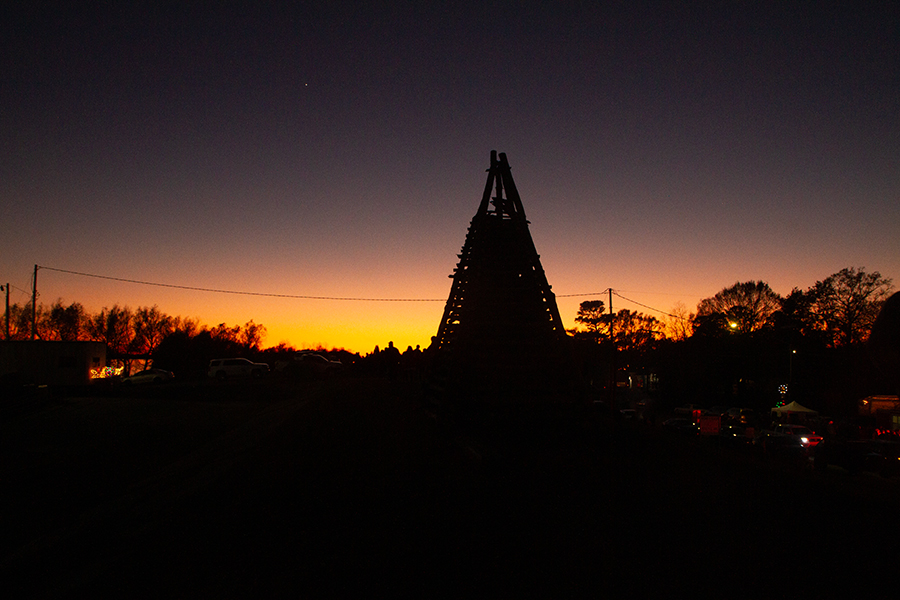 We were told that the bonfires are meant for Papa Noël (Father Christmas) to make sure that he knows where to bring the presents.

At 7 PM, we started hearing firecrackers, we started to see fireworks and the fun begins. 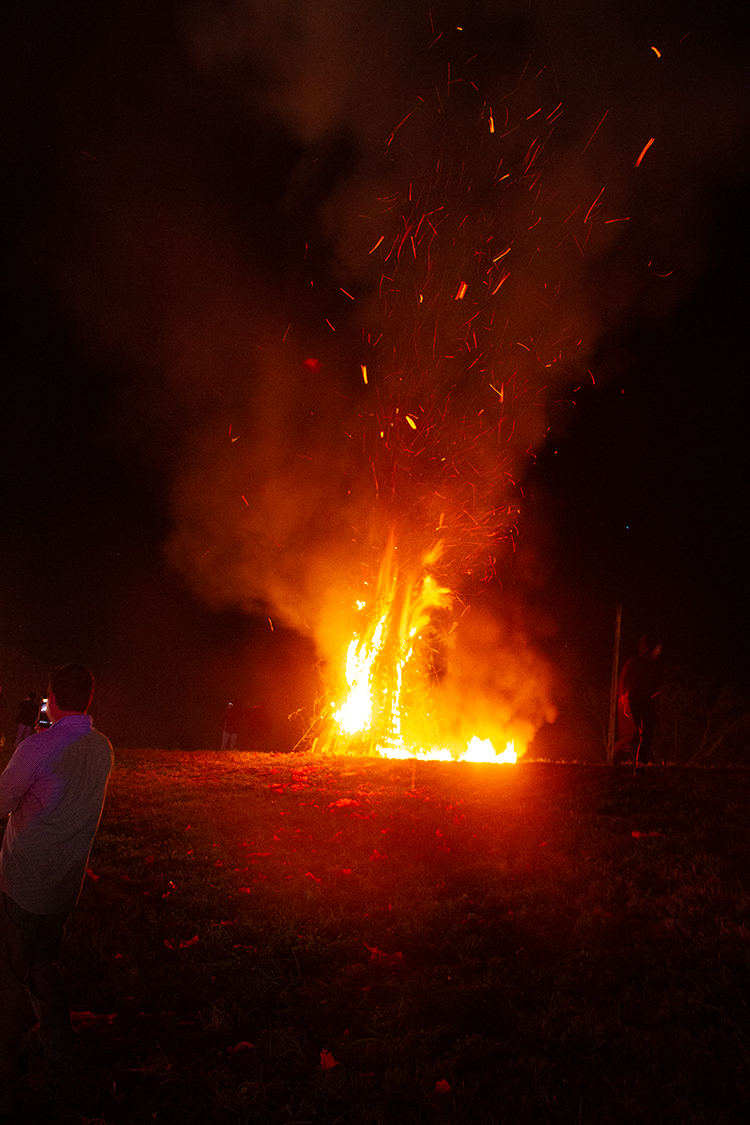 The first few minutes are quite noisy 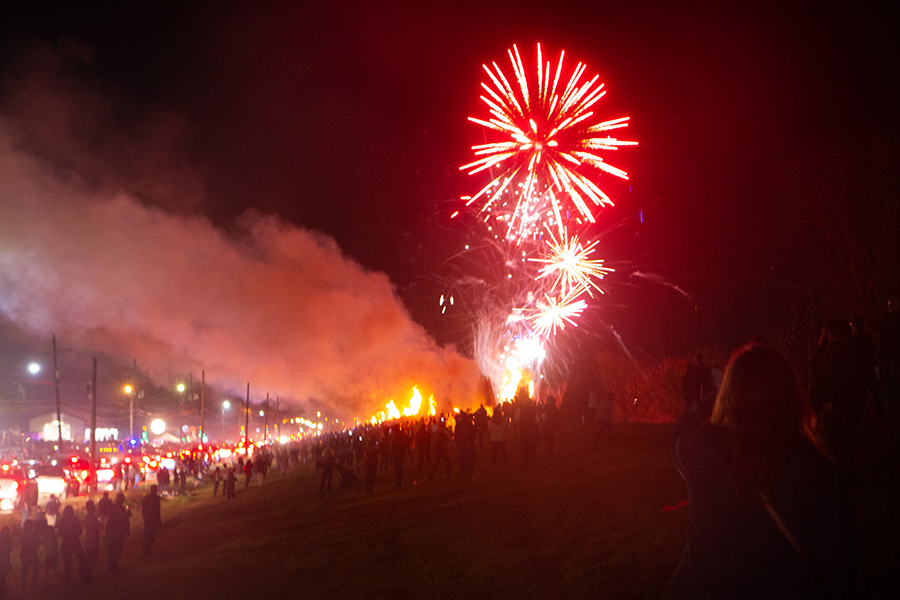 and the fireworks can be quite spectacular.  You will notice that there are quite a few more people now than back in 2004 and the traffic on the River Road is at a complete standstill. 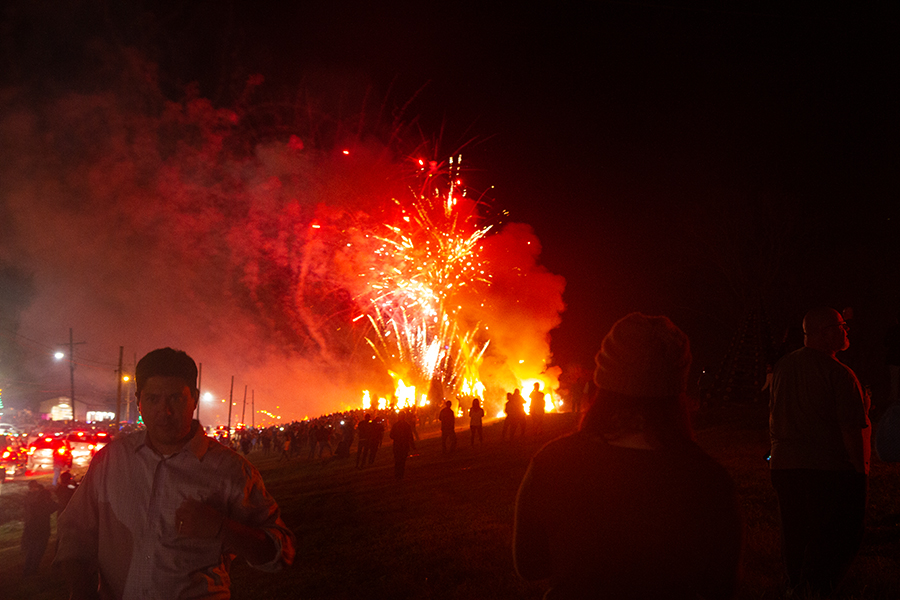 More and more fires are lit 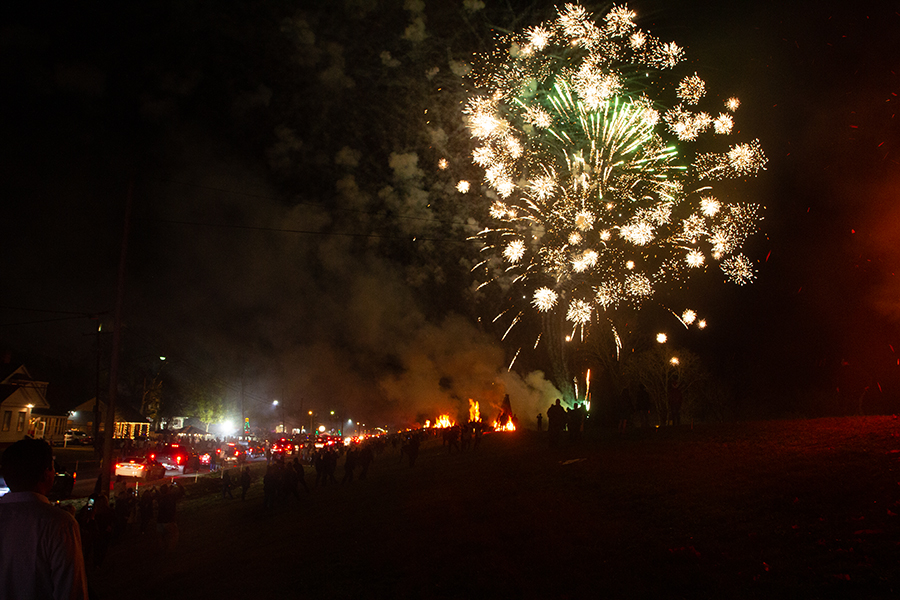 and the fireworks keep coming 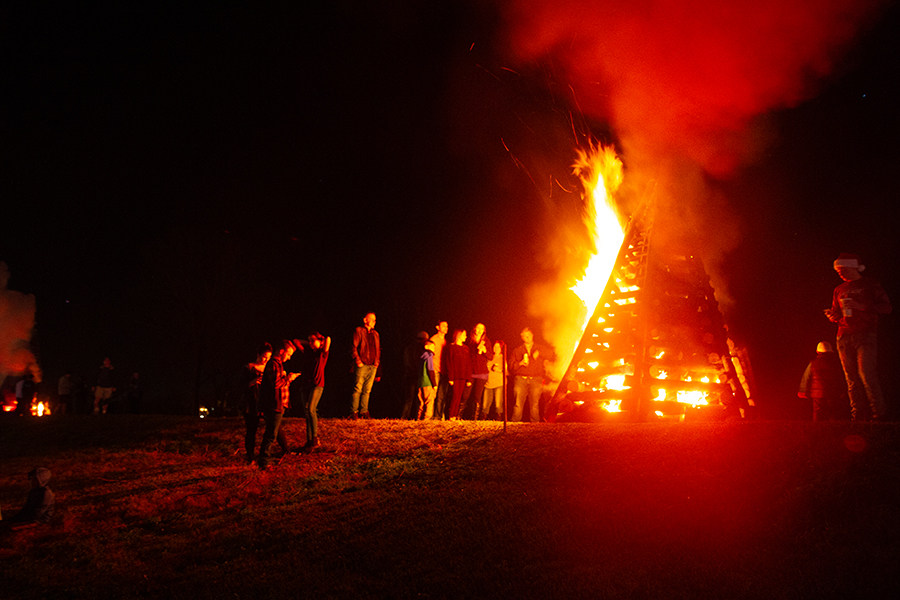 The shape of the bonfire creates a good draft and you can feel the heat several meters away from the fire. 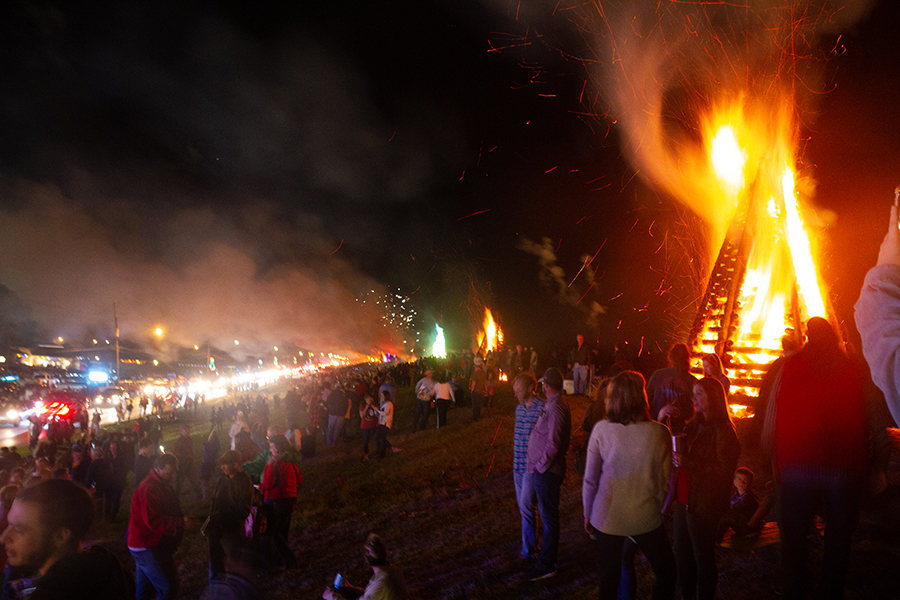 Here is an alignment of several bonfires.  The more observant among you will have noticed the bonfire that caught our attention.  Down the line there is one fire that has a totally different color from all the others.  We went to investigate. 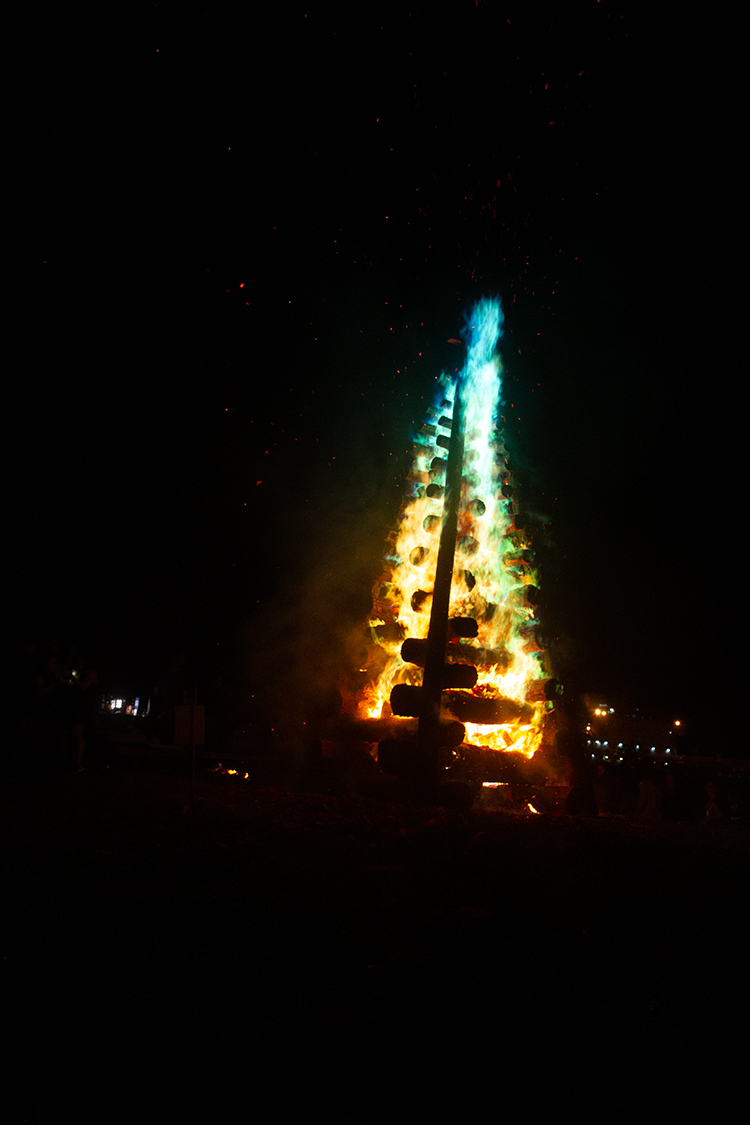 We had our suspicions so we went to inquire further and talked with the people standing around the fire.  The first person told us:  “It is a secret, and if I tell you, I will have to kill you” and then pointed us to the person who actually knows the answer – the person responsible for building that bonfire.

He told us it was very simple, just buy copper sulfate on Amazon and throw some in there while you are putting it together.  It appears that every year, he tries to get a different color, just to be different from the other bonfires.  He certainly managed that this year. 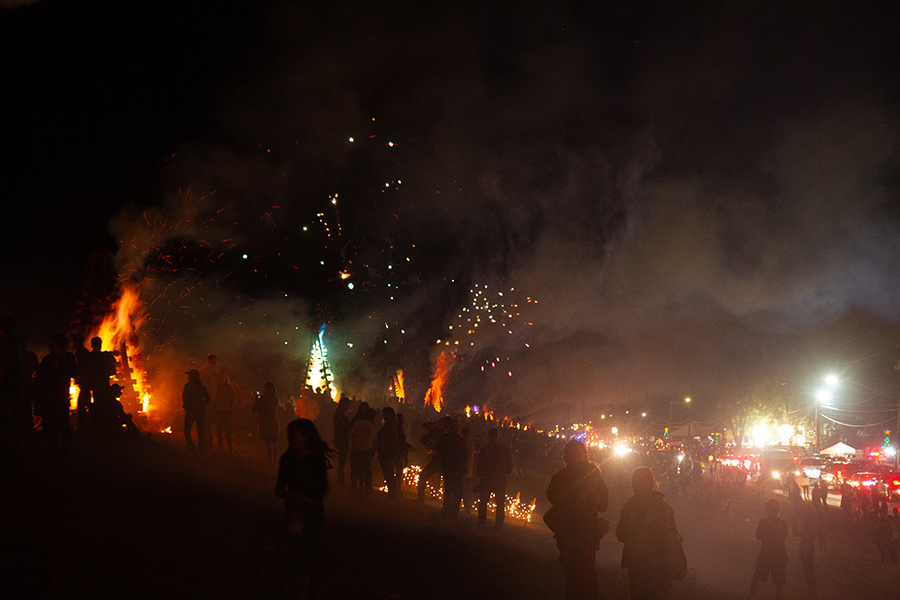 A long line of burning bonfires 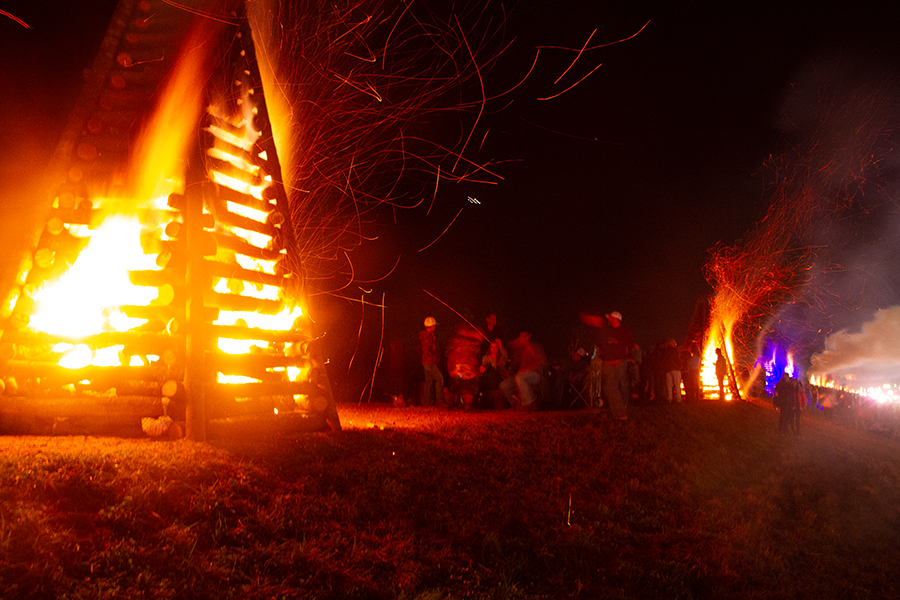 Flying embers on digital too 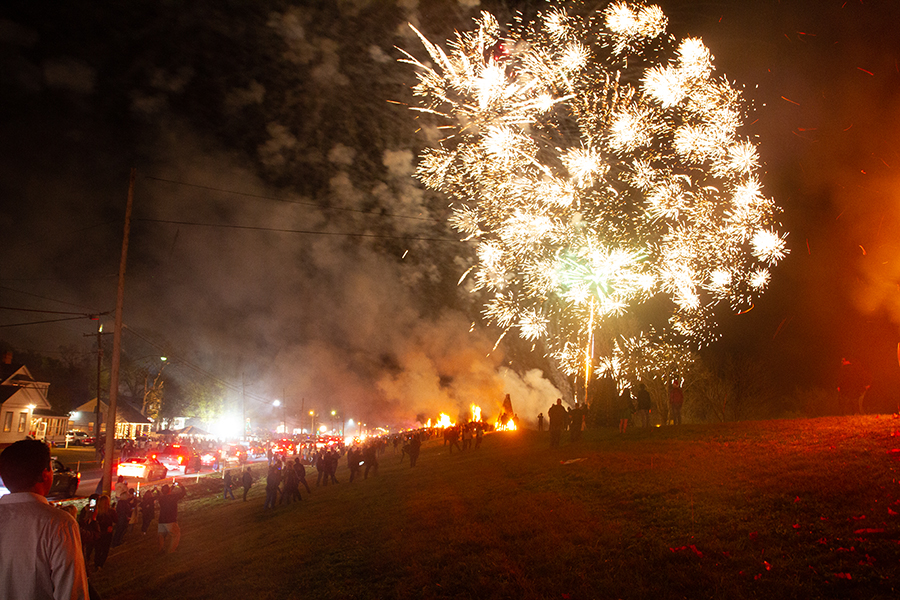 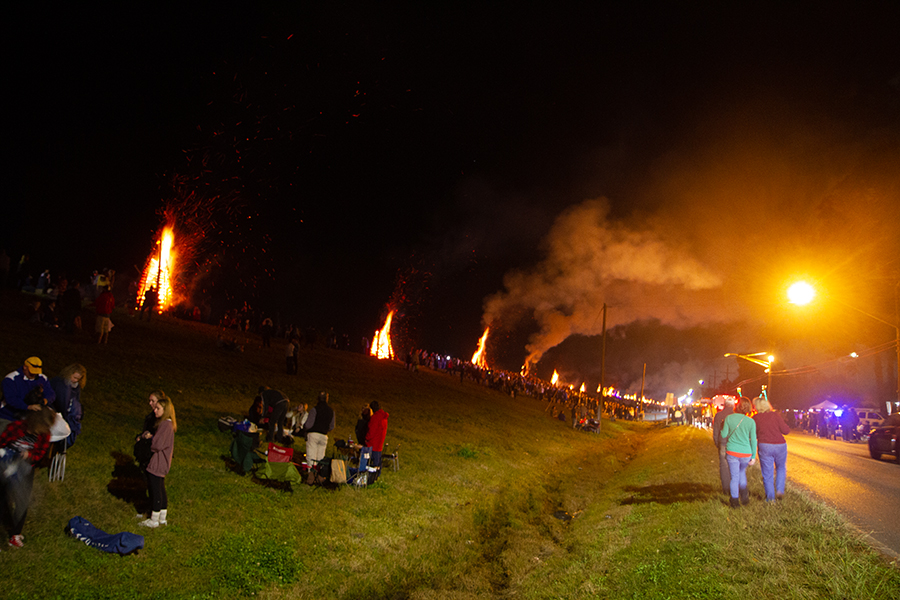 It was already time to go back – the fires will probably continue to burn for quite some time.  The bright light on the top right is not the sun, obviously, just a poorly placed street light (poorly placed for me taking this picture!).

By the way, I did not have a tripod for these shots in 2019 – they are all with the camera handheld and an ISO setting at 1250!  It pays to have a good camera with good lenses.