I do not want to be constantly late with new posts to my blog.  And I have also decided to try and be more regular in the posts, so those following me are not disappointed week after week when nothing new comes along.

I am not going to post something every week, but will try to do something at least monthly at the start.

And here we go with a short trip to London.  Since it was a short trip, I only took 4 cameras and not my big one! The pictures come from my little Casio Exilim and some have been “improved” in Photoshop with the treatment that I usually do with my regular photos.

Bee and I left work for the airport where we took a train to the Midi Station in Brussels and there caught the Eurostar to London. It was only my second trip on the train, and the first since the high speed rails had been opened in the UK.  It took us the better part of 20 minutes to go through Checkin, security and emigration – glad we were early.

We arrived in St Pancras and took the tube to Green Park where our hotel was.  Very nice location, but the hotel was a little dated for a Hilton.  We still had a nice room and it had all the amenities we would have expected.

As it was already late, we went to dinner in the neighbourhood and found a good Turkish restaurant.

The next day, the weather was not great so we decided to do museums.  We started with the Victoria and Albert Museum.  On the way there, we saw the Christmas Windows at Harrod’s which were quite nice.  V&A is a huge complex and it took us a while to get oriented.  We wanted to see the modern glass exhibit, but had to go through several others, very interesting sights just to get there.  We saw an exhibit of copies of famous statues and architectural pieces made in the 19th century.  Some of these were used to restore the original.  Also saw a great display of Chinese artefacts and clothing.

After a couple of hours we had enough so we went to China town for lunch.  Had one of the best Chinese food in a long time!

We bought tickets to the Opera – Mozart’s Magic Flute, tried to get reservations at Jamie Italian (they do not take reservations) and did our share of shopping at Kathmandu.  The opera was very nice, even though I was a little disappointed it was sung in English and not the original German.  However, now I understand the story a lot better and will enjoy it even more when I listen to it at home.  We tried Jamie Italian again – 45 minute wait at 9:40 PM so we went to another Italian Restaurant near Leicester Square

The weather on Sunday was great, so we went to Hampton Court.  An adventure to get there as the normal trains from Waterloo were cancelled due to maintenance work.  We took the Tube to Wimbledon then a replacement bus, which seemed to be taking forever.  I knew we were in trouble when the driver looked back and asked if anybody knew how to get to the station!  Fortunately, some one did and we got there in the end.  This is not the first time we had problems with drivers of replacement busses.

Hampton Court is really majestic and a great day trip from London. The main entrance at sunset!

When we paid our entrance fee, we were told that re-enactments would be going on throughout the day and the next one started in the main court at 11:00.  Since it was close to that time, we waited and sure enough a lady in period costume did show up and start telling us of her love story, not for the King but one of his aides.  However, the king was in love with her etc, etc, etc…

We followed along, and in the main dining room, we got the meet the king!

Of course, the story is full of intrigues and misunderstandings and political moves.

We stopped following it as the Royal Chapel was about to open.  In the chapel is a recreation of Henry’s own crown (the original was destroyed by Cromwell).  We had good audio guides so we continued the visit on our own.  We did the kitchen and we also did an exhibit on the life of Henry as a young man, up to his divorce from his first wife Catherine of Aragon, the daughter of Ferdinand and Isabella who had reunited the crown of Spain and sponsored Columbus to look for an alternate way to India.  It was very well done as this also included the break-up of the Church of England when the English Cardinal who supported Henry could not convince the Pope to grant him a divorce. 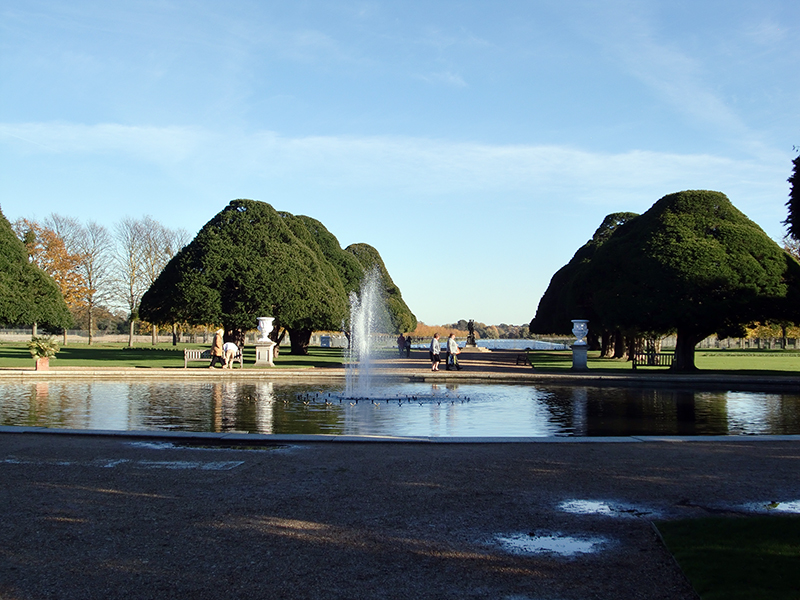 This swan came quite fast when he saw us – if he expected food, he was disappointed! 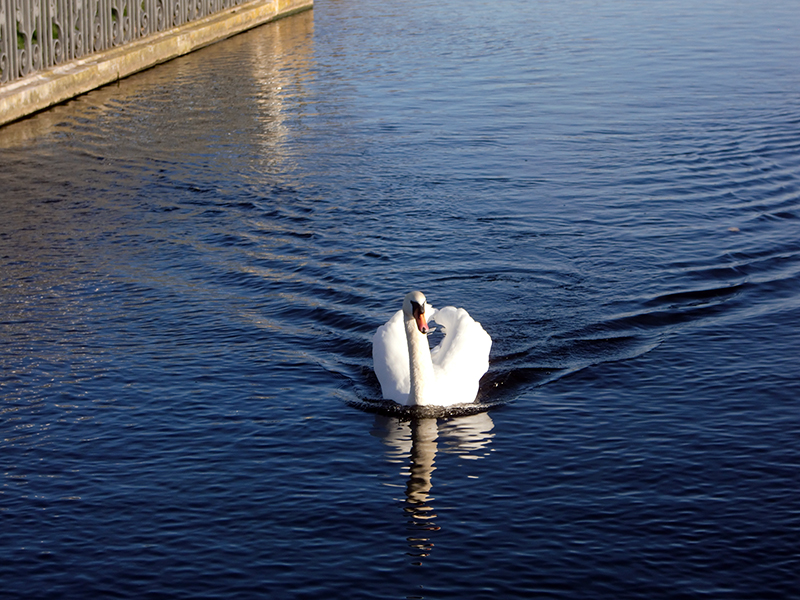 As I said, it was a beautiful day and the views of the palace were magnificent.  I was surprised to see palm tress in the garden! I wonder if they resist to the winter or have to be replaced every year? 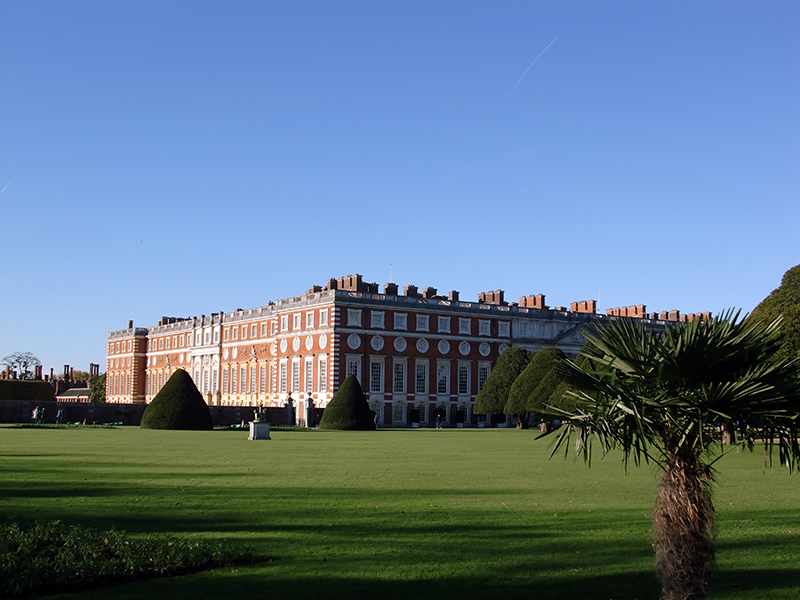 One of the gardens was against the sun, so I had to improvise.  I used the map of the gardens to shield the camera lens against direct sunlight – here is the original photo with my finger and everything. 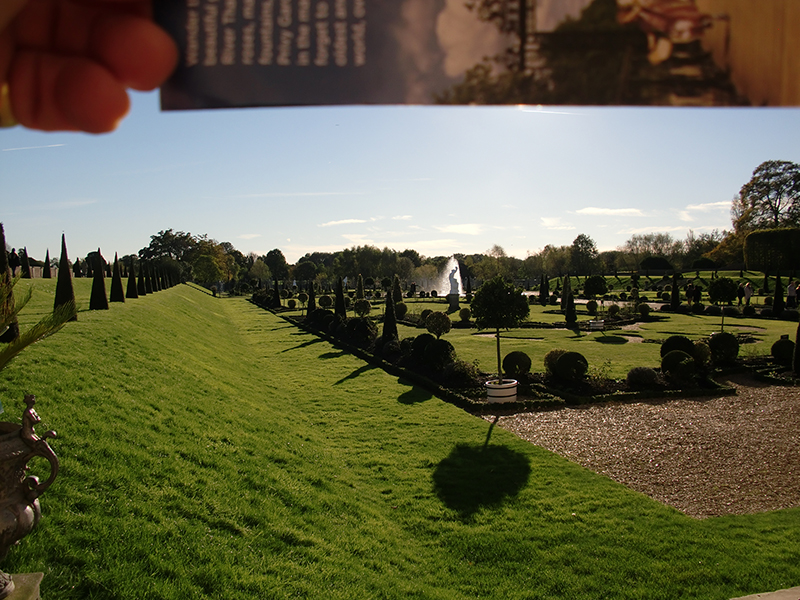 After a little effort in Photoshop, this is how it turned out.  I thought the fountain in the background really accentuated the statue on front of it. 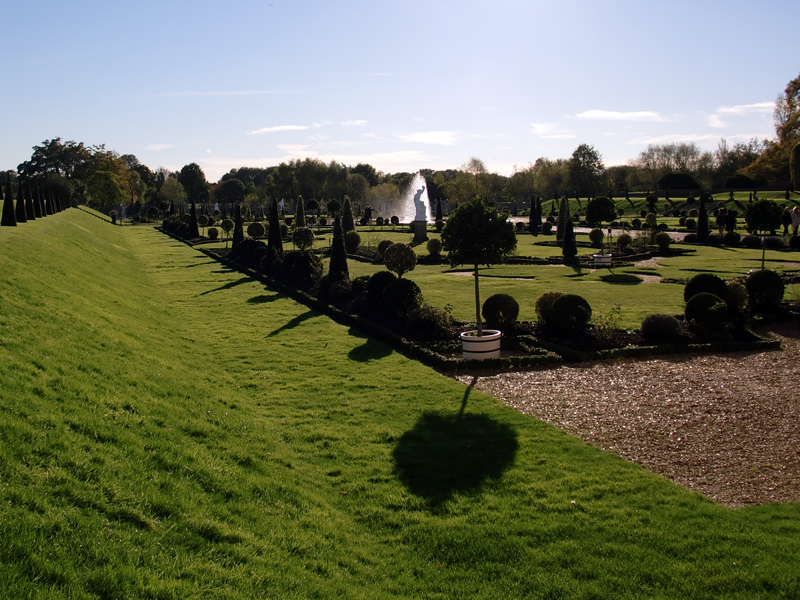 There were little hidden gems everywhere 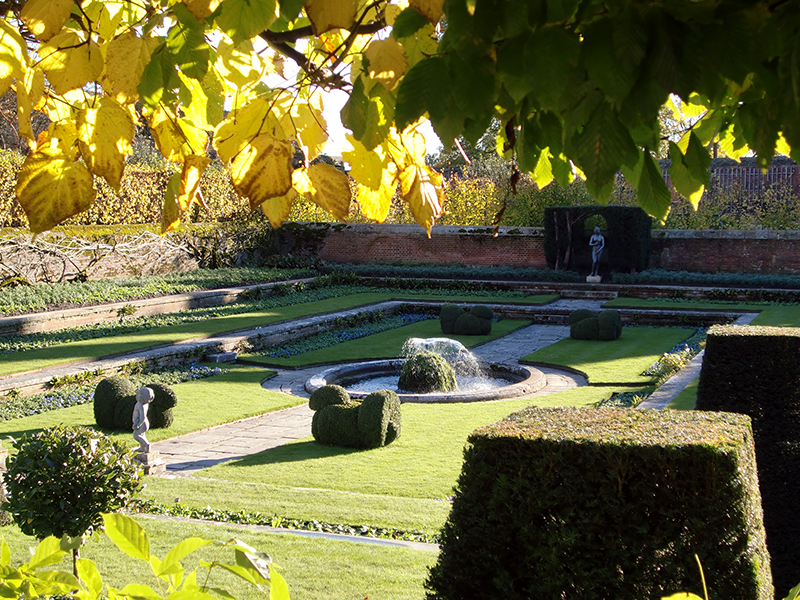 Even the largest vine in the world – almost 230 years old and measures 3.5 meters around the base with the longest branch approaching 36.5 meters! Very impressive.

There is a very impressive clock in the “Clock Court” – we could identify a 24 hour time quadrant, and separate displays showing the date, month and zodiac sign as well as the phase of the moon.  However, it appears not to be in working order, unfortunately. 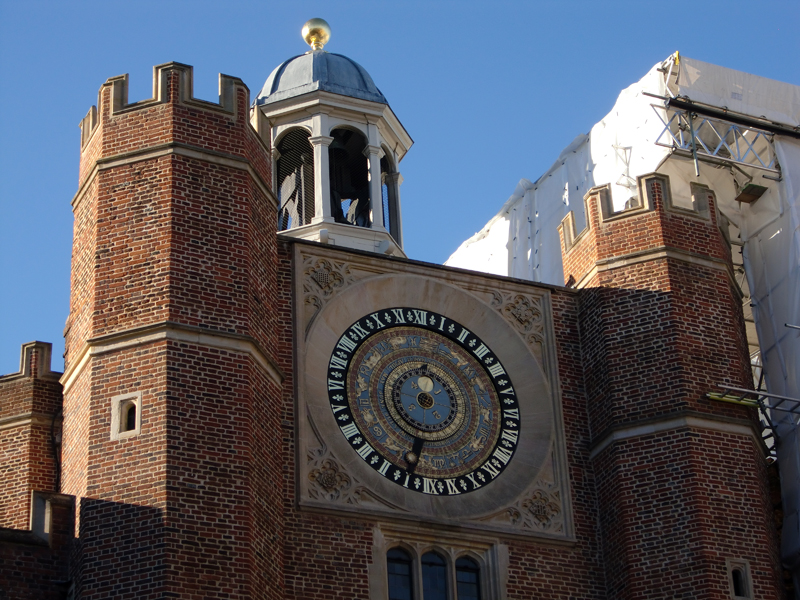 We left at sunset and saw people rowing on the Thames, just by the palace. 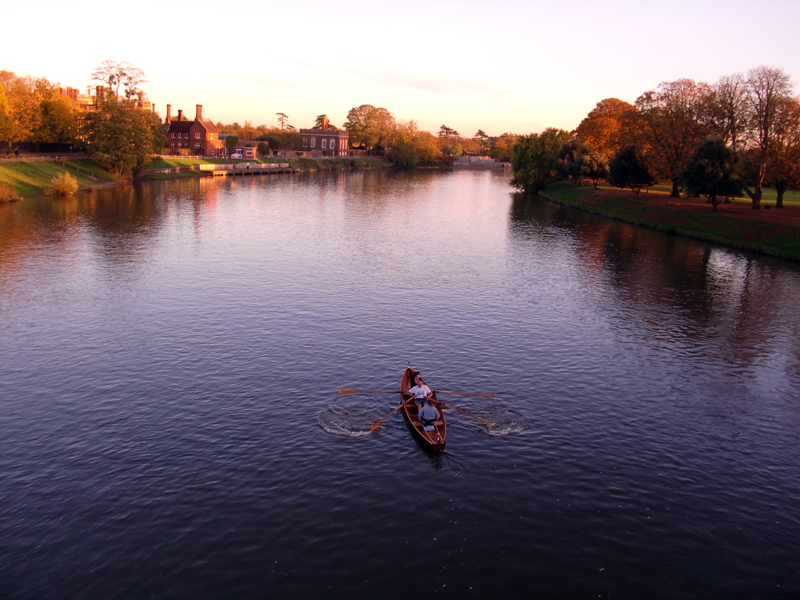 Here is a better view, with the first quarter moon visible 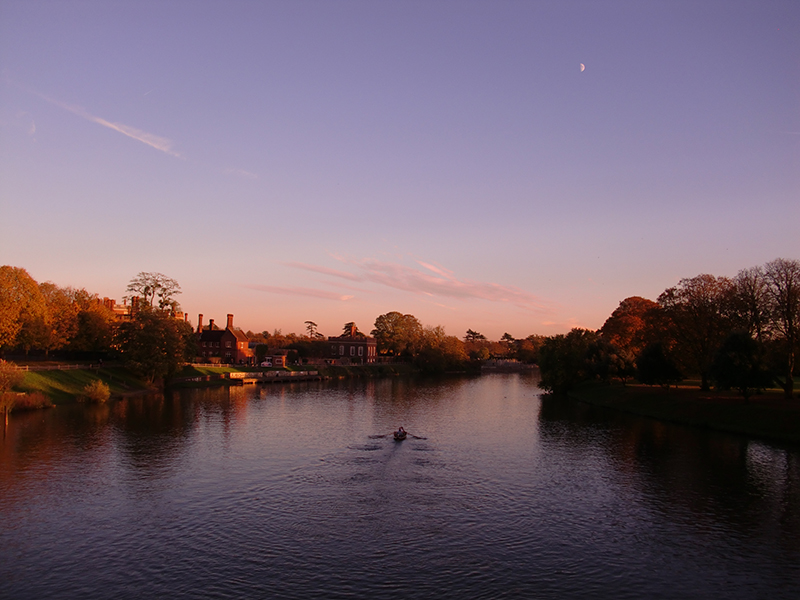 That evening, we went to explore Brick Lane, in a part of London I had never visited.  It is supposed to be the best place for Indian Food and so we went.  The first restaurant we tried was full so we went further into the area.  We picked on at random and did not do too bad.  We had too much food, but all was good.

On Monday, we decided to go see the Paul Klee  at the Tate Modern.  It was a very nice exhibit which showed the evolution of his style, but especially how he was influenced by other and how he influenced others.  In general, after an exhibit like this, I feel that I can see another painting by the same artist and probably recognize it.  However, with Klee, he has done so many things and so many styles, that I cannot be sure to be able to recognize and unknown painting or drawing of his.

We had lunch in a pub! Could not go to London for three days and not have pub food at some point.  Took the train at 2:30 and were back home that Monday evening.  A short, but very enjoyable trip.