After five great days in Florence, Bee and I decided to go explore the Chianti area between Florence and Siena.  We took the long way there, stopping in Pisa first.  I had not been in Pisa for a few years and the last times I was there, the Campanile, also known as the “Leaning Tower of Pisa” was leaning a little too much and under severe renovations.  That is all done now, and the view coming into the Piazza dei Miracoli is back to where it should be, to me, one of the best sights in the world … 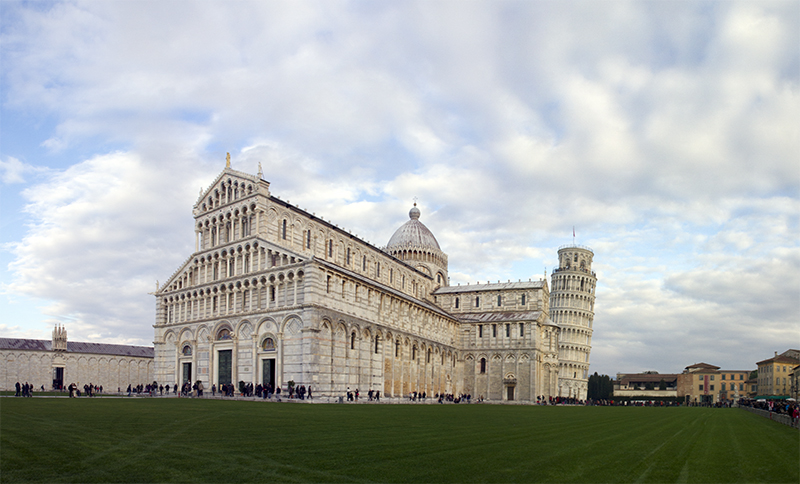 We started by visiting the Battistero, not visible on the picture above but facing the Cathedral.  The interior was surprising to say the least.  It looked as much as a formal meeting place for political discussions as a place where young babies are introduced to the Catholic faith. 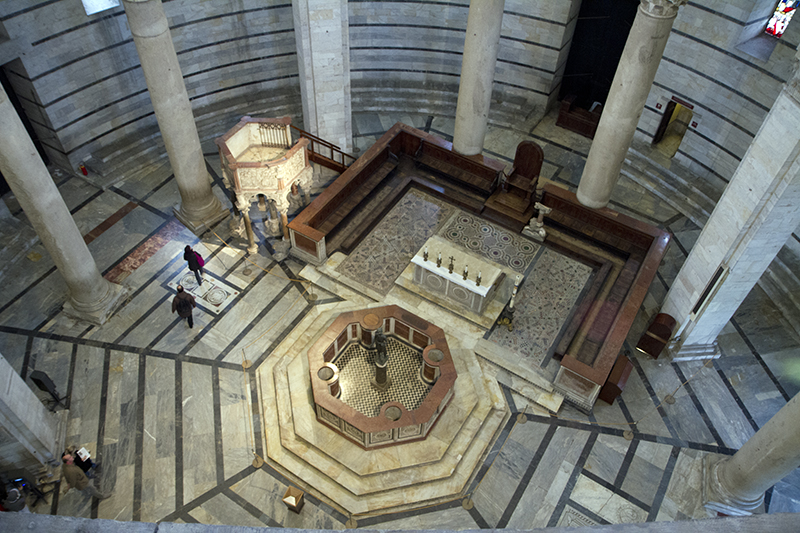 You can climb the tower again.  This is done in groups of about 20 people every 1/2 hour.  You book your ‘time’ in advance and hope the weather does not change too much just before you get to go in.  It was threatening to rain, but held off while we were in line.  The visit begins inside, at the bottom of the tower which is hollow! I forgot that.  There is an explanation of the history of the tower and the restorations, which reduced the lean by a few degrees and actually stopped it from going further.  Quite a success considering that 10-15 years ago, people thought there was nothing to do and the tower would eventually collapse.

There are instruments inside the tower which measure its position to make sure that everything remains safe. 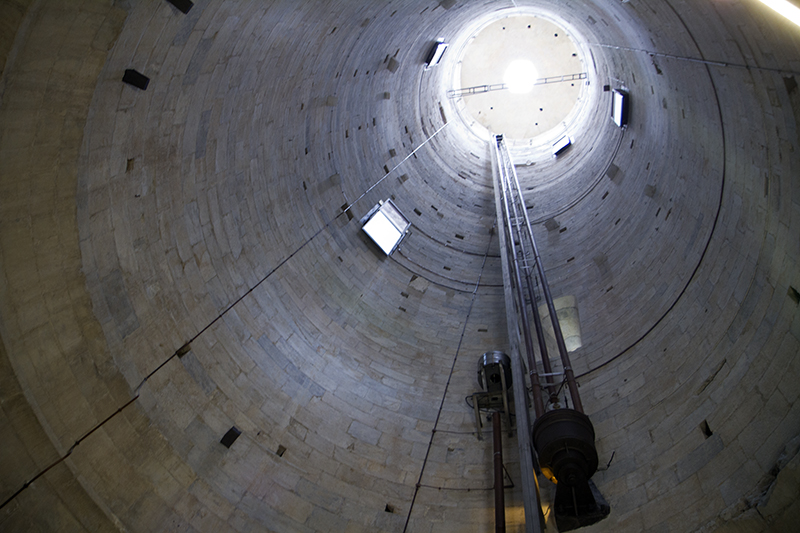 It is a bell tower and therefore there are bells at the top.  Here is a panoramic view of the carillon.  Being so close, I Was happy it was not time to ‘ring’ the hours, or call the faithful to mass.  That would have been very painful, I bet.

The view of the Piazza dei Miracoli from the top is spectacular.  The Cathedral is in front, obviously, then the Battistero and to the right, you can see the roof of the Campo Santo.  In the distance, Marina di Pisa, now a place where beachgoers go to private beach resorts but formerly the source of the wealth of Pisa with access to the Mediterranean Sea and the spice trade. 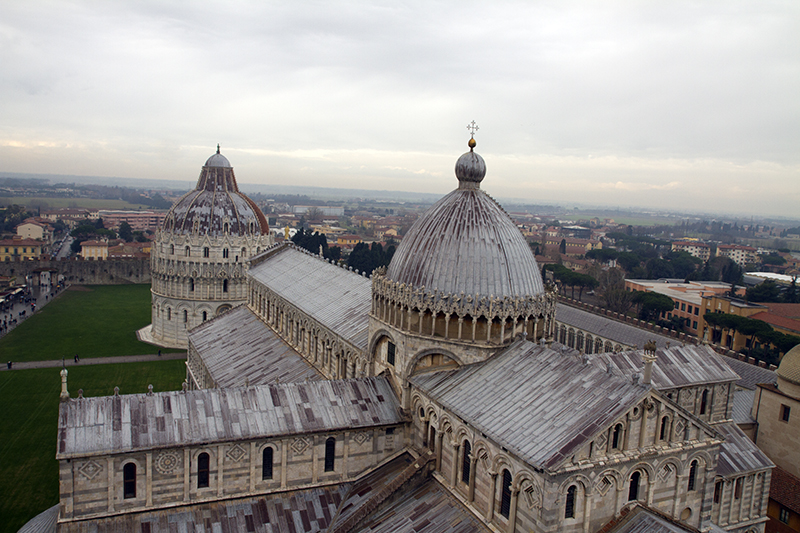 As I was saying the history of Pisa is long and includes periods of great wealth.  It is a small sleepy town now, but this building shows that there was a lot happening here in the past.  Pisa, Genoa and Venice fought many years for supremacy over the Mediterranean and the spice trade from the orient.  Unfortunately, Pisa was probably the third best of the three and was first to lose its influence and wealth. 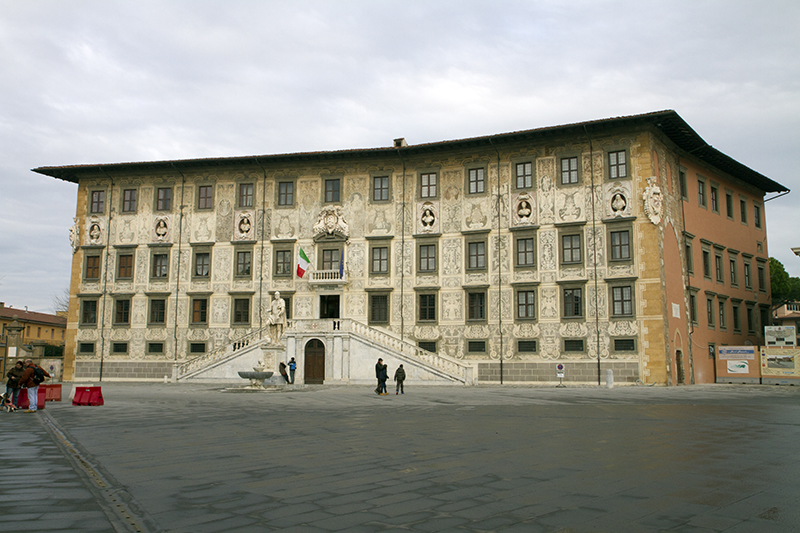 Inside the Cathedral is fully decorated!  Frescoes and mosaics make up the bulk of the decoration, enhanced by the use of two different coloured marbles. 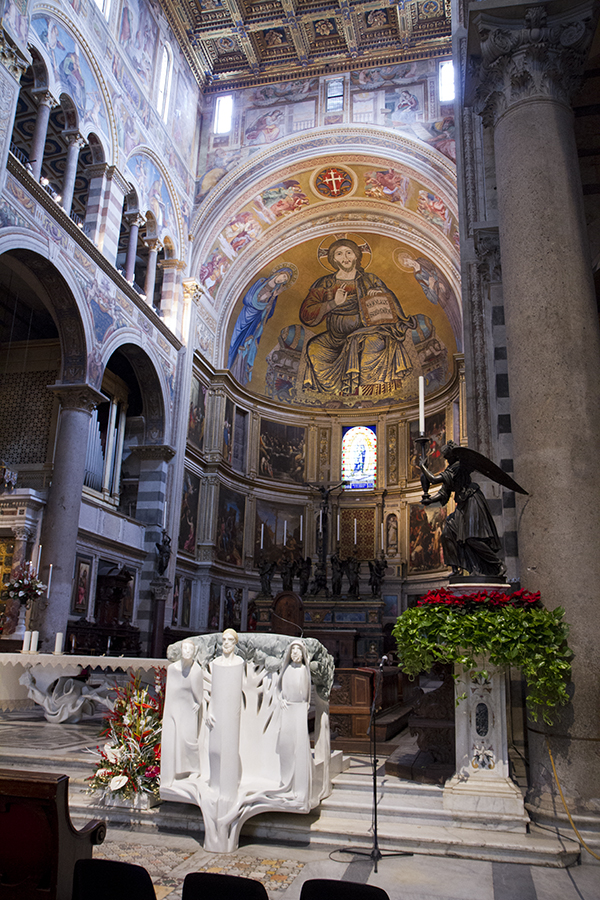 The Campo Santo used to be the cemetery for the rich and famous.  It was decorated with frescoes that are now kept in a museum on the opposite side of the piazza (well worth the price of admission).  It is also in the Campo Santo, at a time when they were making renovations to the frescoes, that they re-discovered in the 1960’s or 70’s the methods used for making frescoes. When they peeled the layer of frescoes from the wall, they discovered a layer underneath which had the sketches from the artist for what he wanted to do.  Frescoes, as the name implies, were painted on a layer of clear plaster while it was still wet (and fresh) and so needed to be done quickly.  The whole design was done previously in outline on the wall so that the artist and his helpers could quickly colour it while the plaster was wet.  Painting by numbers 500 years ago?

This is the Circles of Life – one of the best preserved frescoes still left in the Campo Santo. 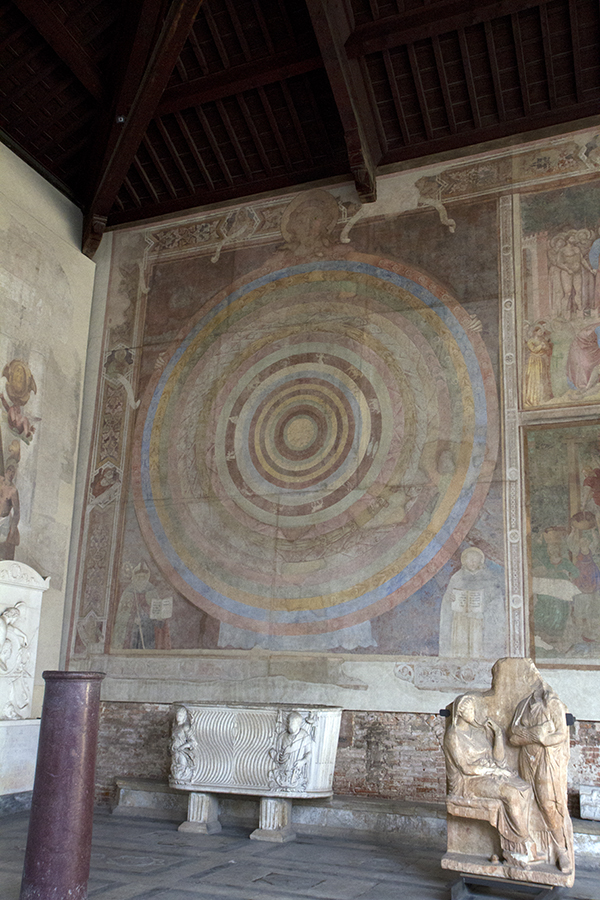 We stayed at a gorgeous small hotel near Castellina in Chianti, in the heart of the Chianti region.  My favourite hotel in the area is the Belvedere di San Leonino, a bit further outside Castellina, but with the best views of the Chianti landscape.  Unfortunately, they close for several months during the winter.  So we stayed instead at Hotel Colle Etrusco Salivolpi and this was an excellent choice.

Second day we decided to explore Siena.  The weather was not the best – it was raining and cloudy, but still the sight of the Cathedral is spectacular.  It is the most recognizable church in Tuscany, with layers of White and Green marble all around, especially the bell tower. 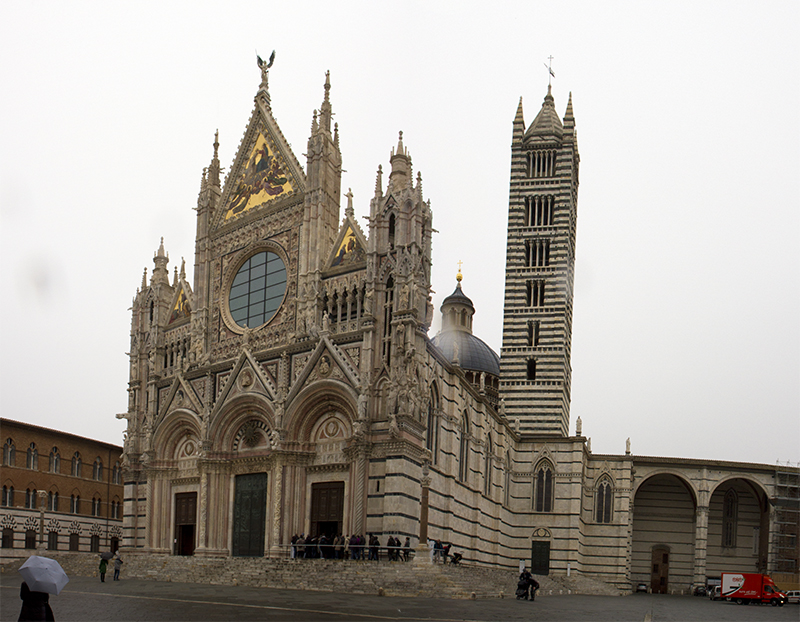 The interior is known for the incredible decorations of the floor.  In the past most of these were only visible during a few months each year, the rest of the time, protected from damage under sheets of plywood.  Now all but 1 or 2 are visible to the public all the time.  The larger designs are impossible to photograph from the floor.  One depicts a complete battle scene with horses, knights, infantry and lots of blood and guts.  Here is a simpler one just for a taste… 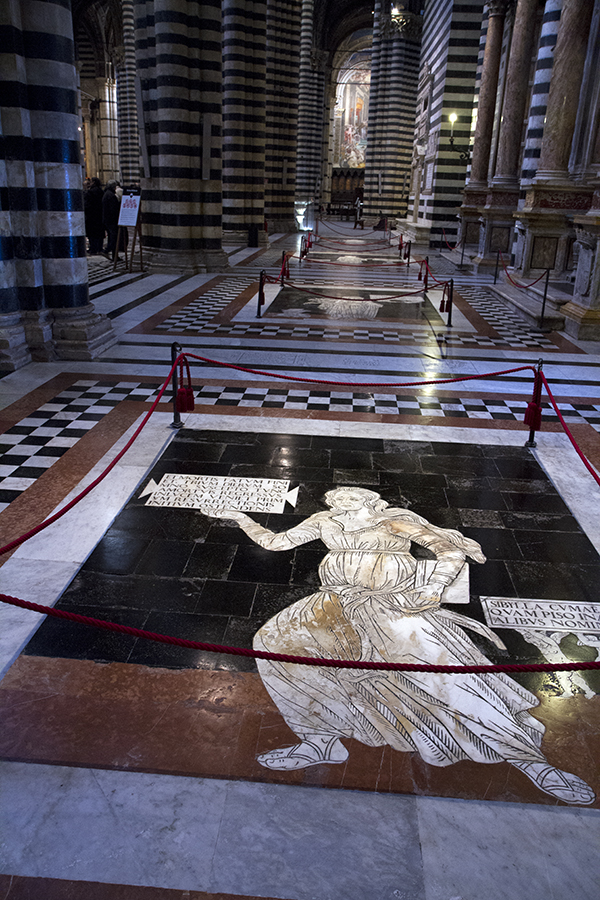 I had never been in the Battistero of Siena. I really did not even know where it was – there is no small building outside the cathedral like in Florence or Pisa.  The Battistero is actually located underneath the main church, accessed via very steep, and long stairs – it is well worth the visit as well! 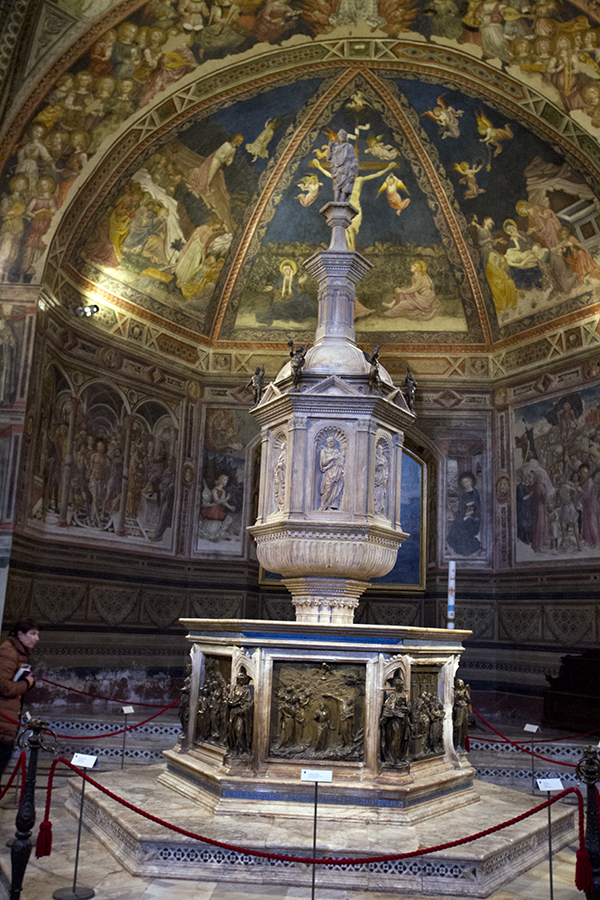 Recently, in the last 20 years, archaeologists discovered a lost  space between the Battistero and the Cathedral.  They are still not quite sure what it was, or why it was eventually completely filled in.  We were able to go in and explore the vaulted space with wall paintings and a very peaceful environment.

We also walked around town and visited the Piazza del Campo, the main square in Siena where the Palio is run twice a year.  The weather did not allow any nice photos unfortunately.

The weather was much better the next day when we had decided to visit the countryside.

Can you think if a more classic Tuscan view than this? 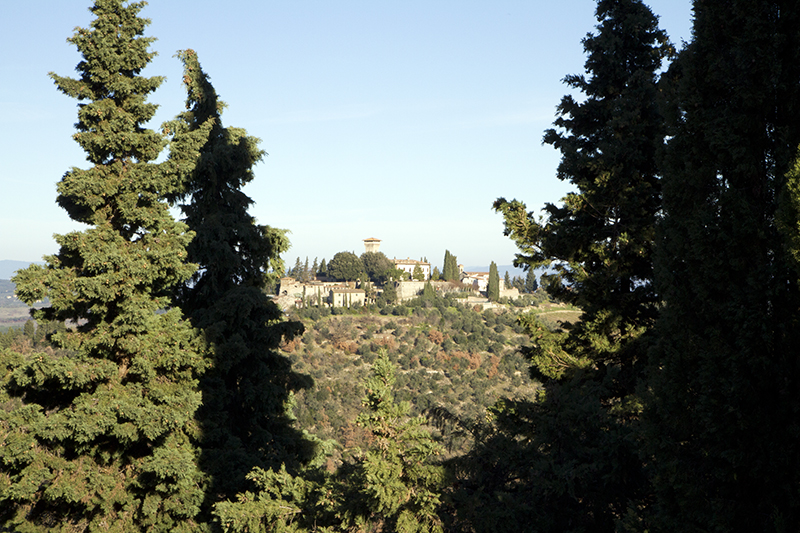 The day was so clear that we could see the top of the Alps, covered in snow, in the distance (several 100 km away) 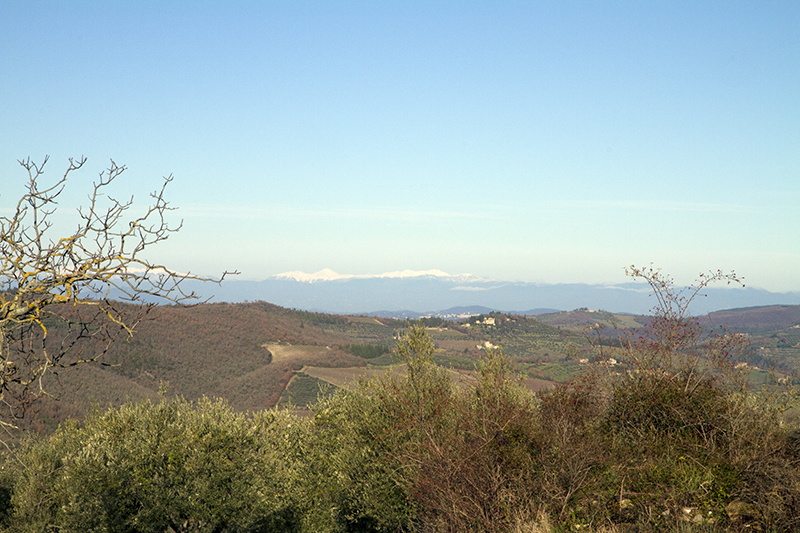 We went to visit the ancestral home of the person who discovered Manhattan – he has a bridge named after him which is good, but you wonder why he would have wanted to leave this paradise at a time when going out to sea was a very risky business. 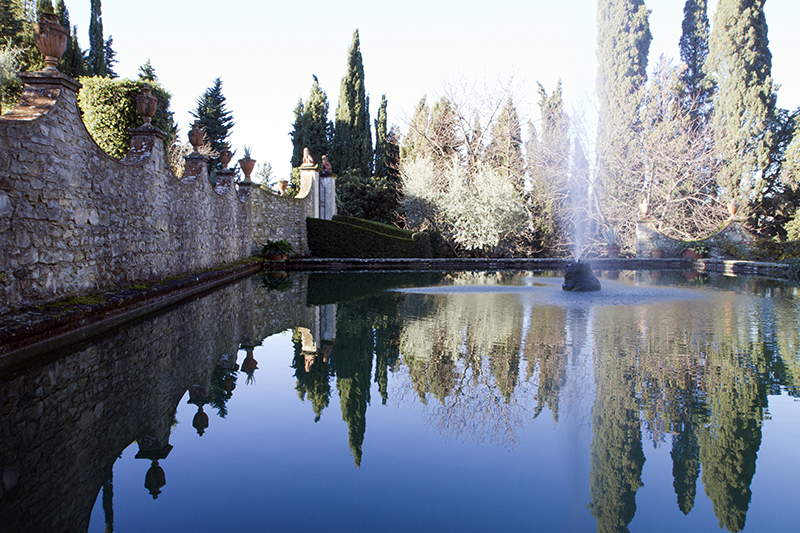 Castello di Verrazzano is still making wine today – Yes, their name is spelled with two ‘z’ even though Americans decided to spell the bridge name with only one! Was is that much more expensive to get it right?  There are extensive vineyards around the hilltop castle. 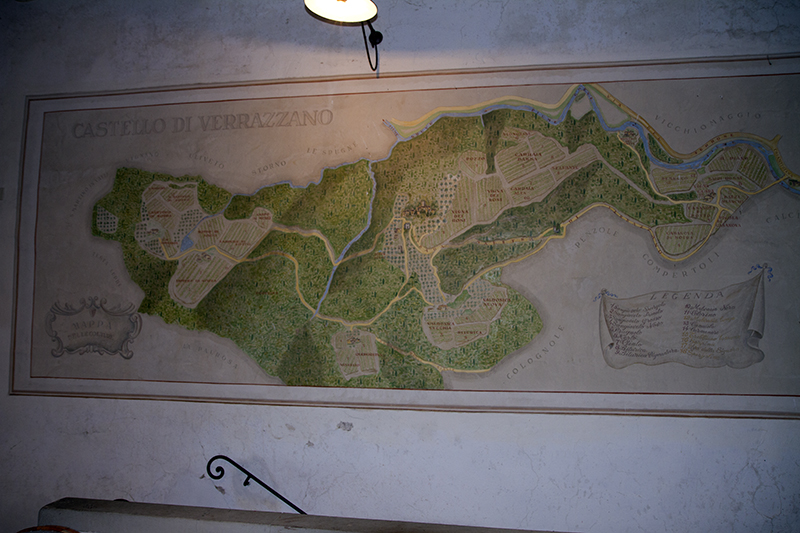 The neighbours were famous too – this is one of the many palaces owned by the Medici family – you know, masters of Florence and Pope from father to son for several generations … 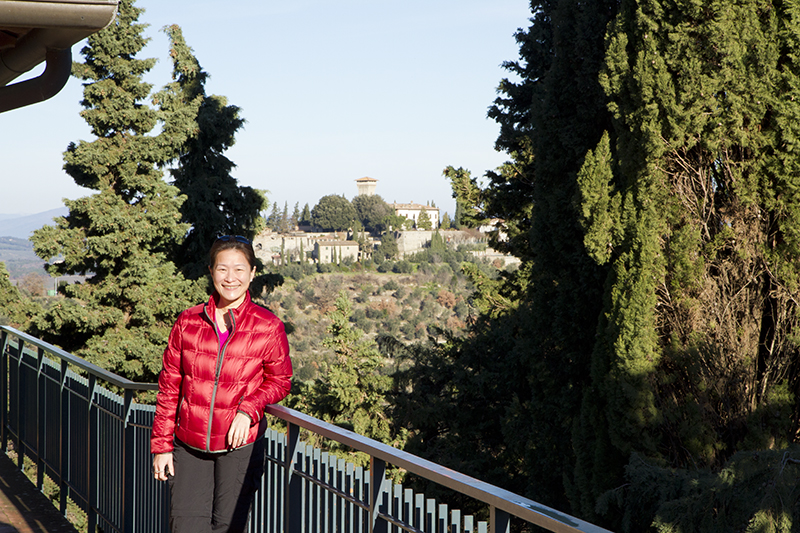 This is a humble castle, nothing too outlandish really.  We had a very nice visit and lunch in the main dining room with a wine tasting.  I still prefer the “Cantinetta di Verrazzano” which we visited in Florence though. 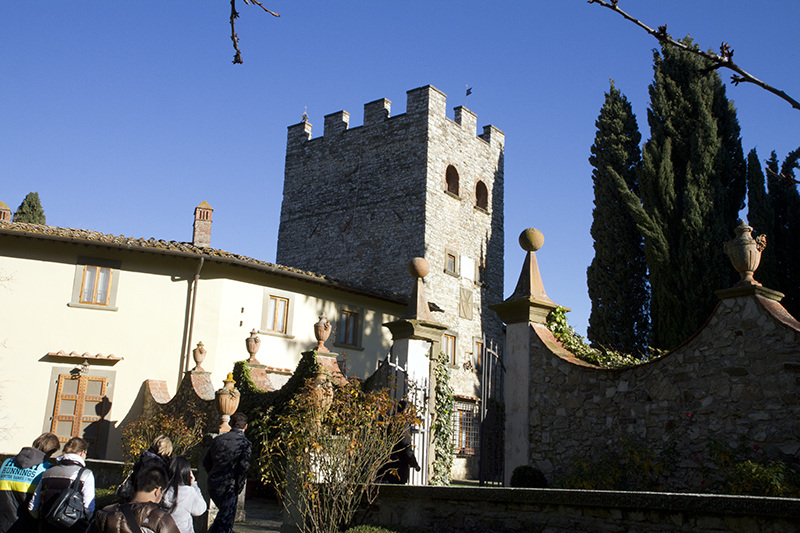 We also visited San Giminiano, known for its towers.  This is actually the best view of town I was ever able to get.  Came in from a different angle this time. 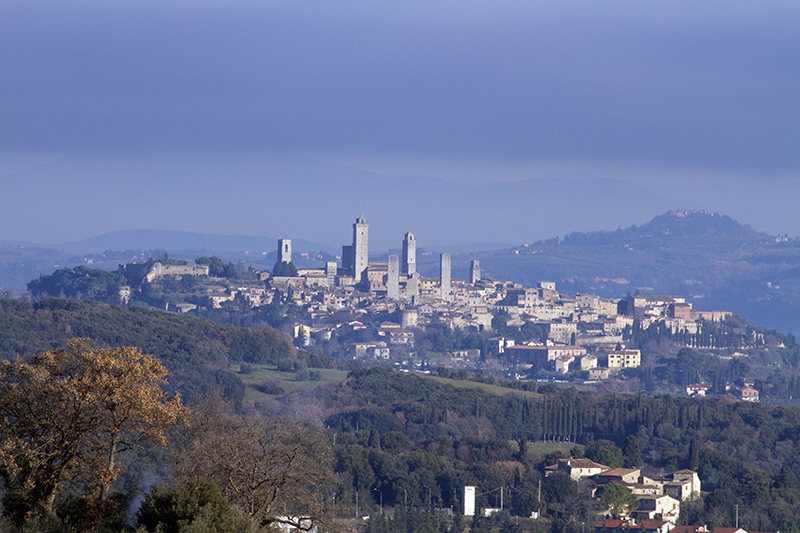 We visited one tower in town.  You can rent it by the day, if you want.  It really is not very practical.  There is one room per floor, with very narrow stairs to go from one room to the next.  The kitchen is on the 5th or 6th floor and I cannot imagine having to carry my beer all the way!  There is a nice view from the very top, but I am not about to spend money to stay there.

The main square has not changed in many years. 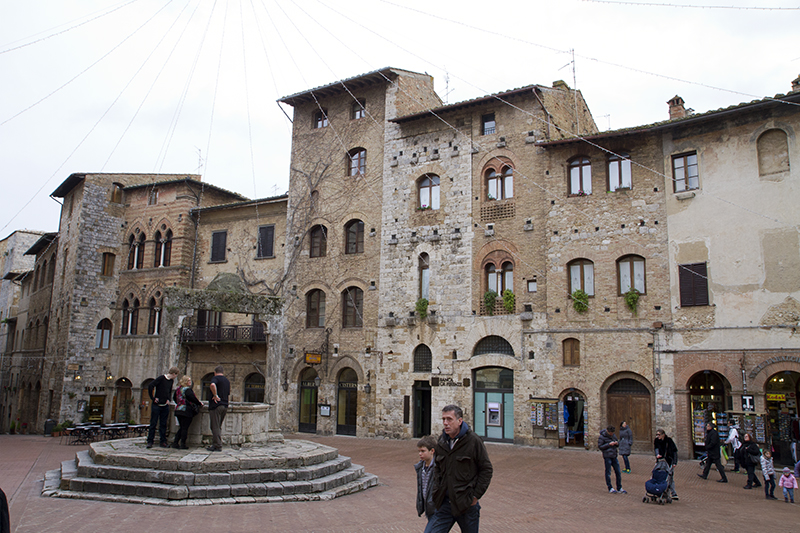 We discovered a very interesting plaque next to one of the towers. 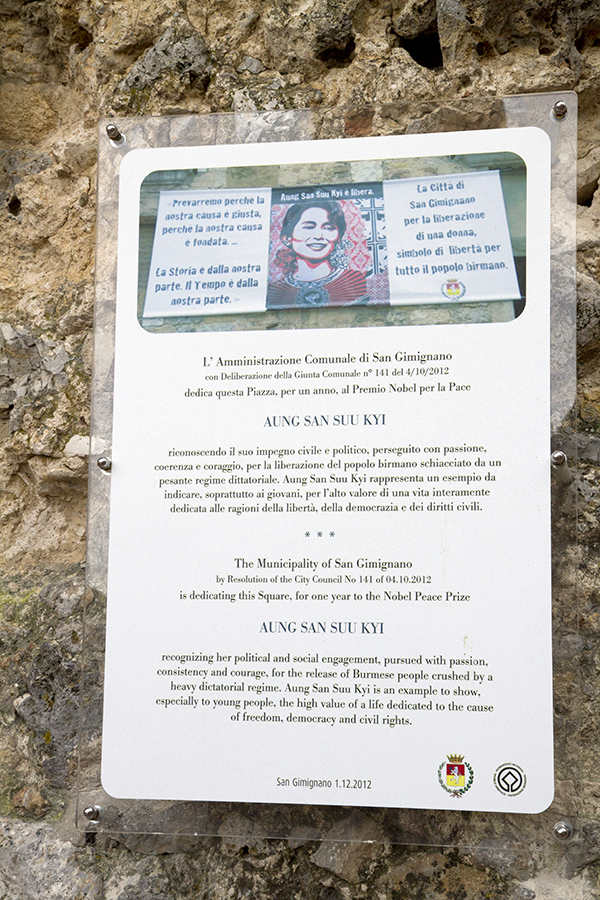 A very nice gesture for a very special person.

One last view of the town: 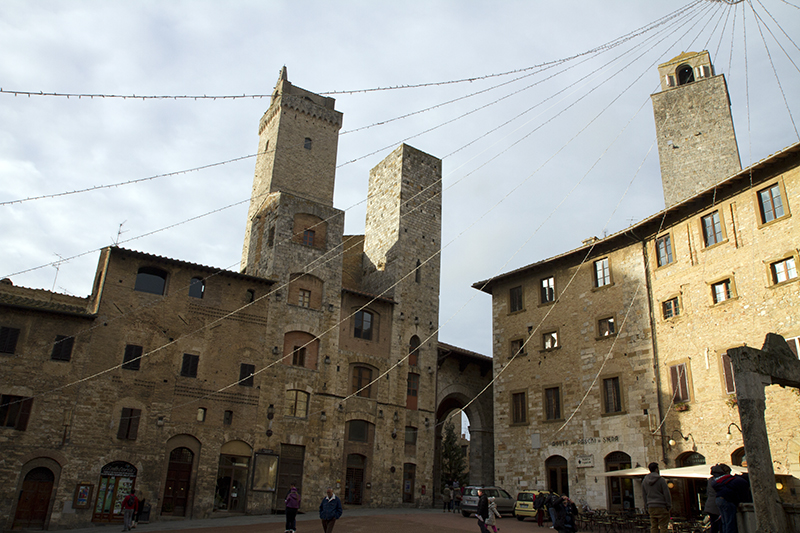 It was already time to go back to Brussels and back to work! A very nice trip, again, in Italy.