For a long time, I have wanted to go to Alaska and it seemed to me that a cruise would give me a good chance to see some of it.  However, the idea of sharing cramped quarters with 1000-4000 other guests did not thrill me nor Bee.  When we moved back to Houston, an Alaskan Cruise was one of our priorities which became even higher when it became clear that my Dad was interested in coming to visit us and would be interested in a cruise too.

We found the PERFECT way to do this!  On 31 August, we left Houston for Seattle and later Juneau where we arrived in mid-afternoon (there is a three hour time change).

We would board our boat on 1 September around noon and therefore we had a full evening to enjoy and then a morning to ‘kill’.  We had a very nice dinner at a Fish&Chip shop right on the old harbor (In the old Warf right across from the sea plane docks – Alaskan Fish and Chip Co – it was quite good).

In the morning, we went to visit a salmon hatchery which was pointed out to us by the taxi driver who took us from the airport to our hotel.

There are salmon stairs to allow the adult salmons to climb back into the tanks were they will lay or fertilize the eggs.  Unfortunately, we were there at low tide and therefore the salmons could not reach the first step.  We saw a few salmons swimming around looking for the entrance though.  It is amazing that even in this very artificial situation the instincts of the salmon pushed them back to where they were born. 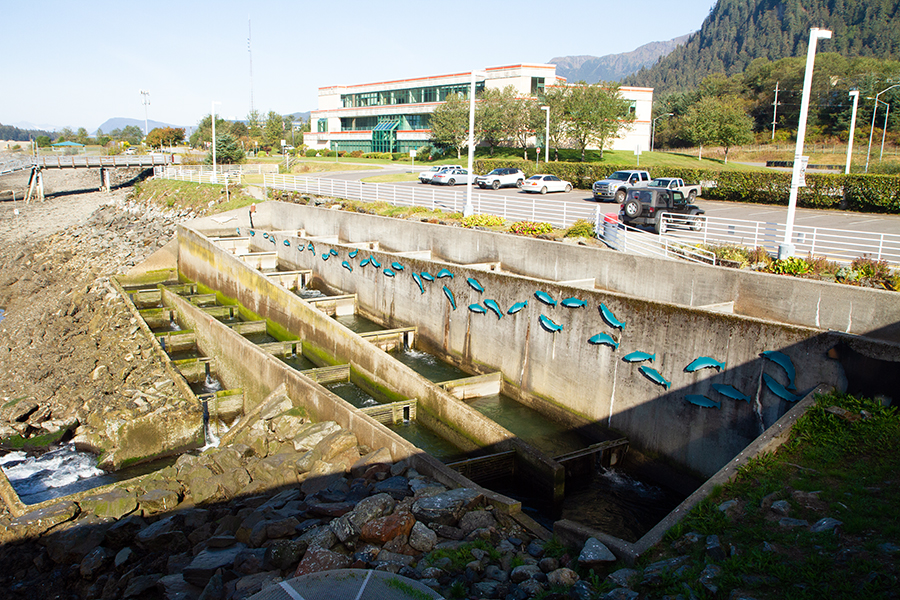 Inside the hatchery there were four tanks which were filled (we were told) with 190,000 young salmons.  You can see a few swimming around where the lights from the windows shine but do not reflect.  The photo below shows two of the four tanks.  The young salmons spend 1-2 years at the hatchery before they are released back into the wild.  After 5-6 years, 1-5 % will return to create the next generation; the rest were food for men and animals throughout the region. 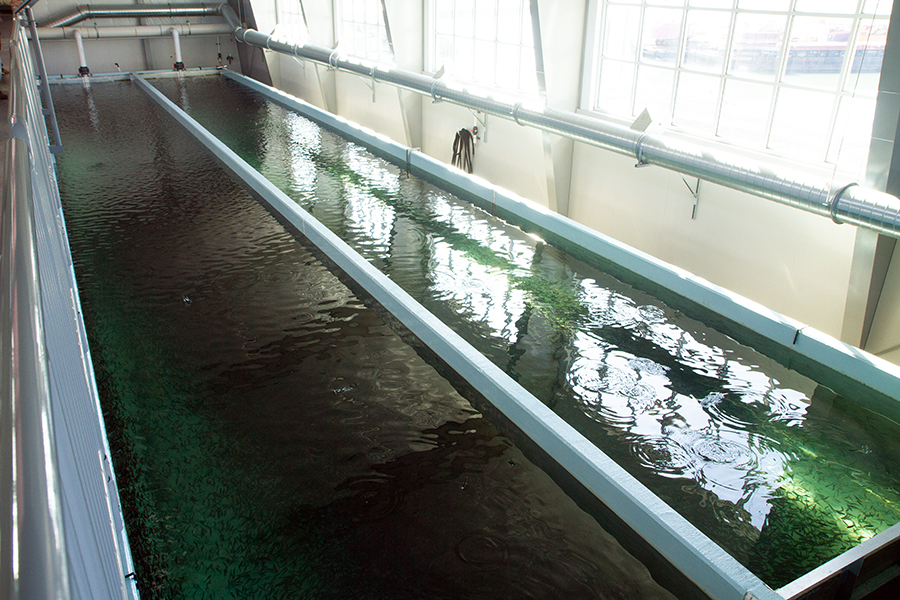 From the hatchery, we had a good look at the Gastineau Inlet, the narrow sea arm in front of Juneau where harbor seals were hunting the salmon waiting to get up the stairs.  Juneau is actually at the end of the inlet which creates a dead-end at low tide due to shallows – one can almost walk across it at very low tides. 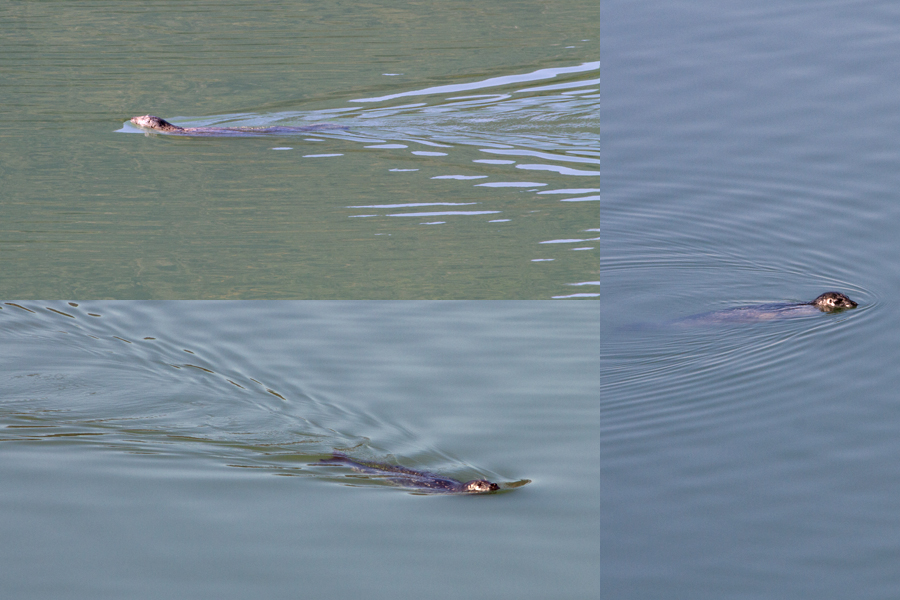 A view of Juneau – these are not the boat we took!  The one on the left is one of the Mega-Cruise sips that just pulled into Juneau around 11:30 AM.  It has over 5000 passengers! The one on the right is a lot more modest – it si a National Geographic ship that was also loading as we went by.  Probably holds 200 passengers and that was still a lot more than our boat. 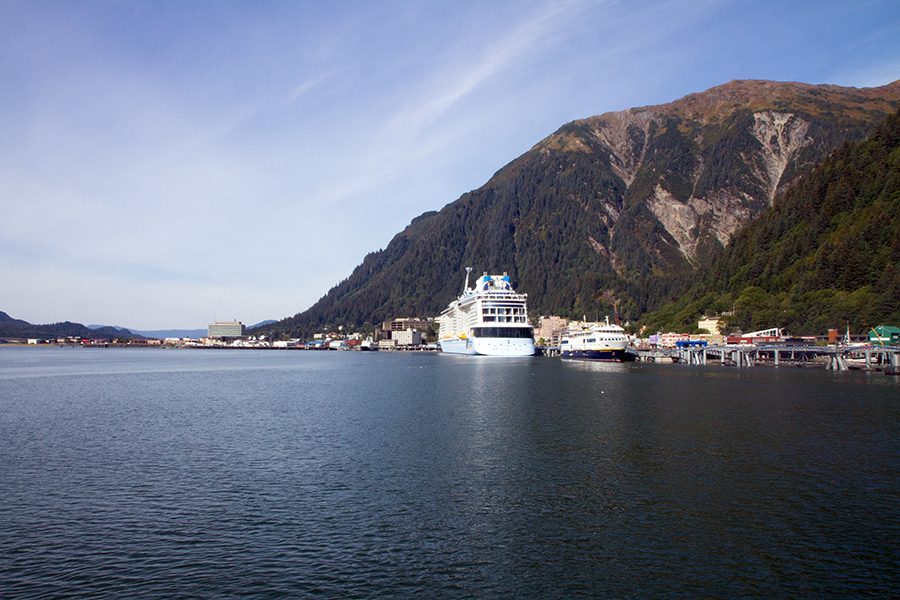 This is not the boat we took either.  It is a private yacht that left just as we were boarding ours.  For a moment, I thought it might be nice to take that one – the I discovered all the great features of the boat we would spend the next 7 days on and did not regret anything anymore. 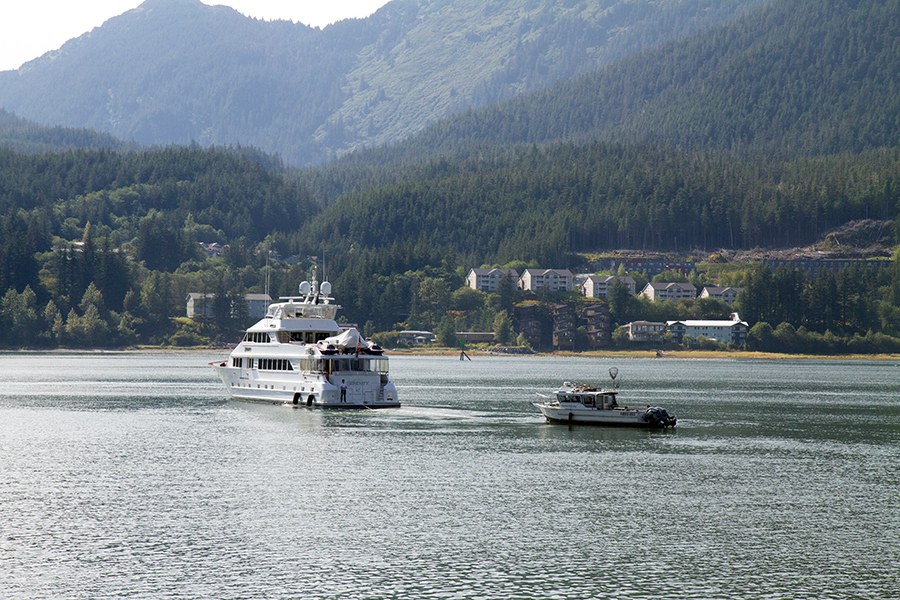 This is “The Catalyst” – our home for 7 days.  The boat was christened in 1932 (there was only one passenger on board older than the boat) as a research vessel for the University of Washington.  She was a patrol boat in the Aleutian Islands during WWII and changed hands several more times after that.  She is now owned by a couple who take very good care of her and she makes regular voyages between Juneau and Petersburg from May to September.  We are actually making her last trip of the 2019 season.

Catalyst only has 6 cabins, 4 below the main deck, one at the back of the dining area and one (the one where Bee and I stayed) located on the top deck right behind the pilot house.  She has sea kayaks for 14 people, a fast tender and 4 wonderful crew members.  Since there were only 6 gusts on this particular cruise, we quickly became one happy family. 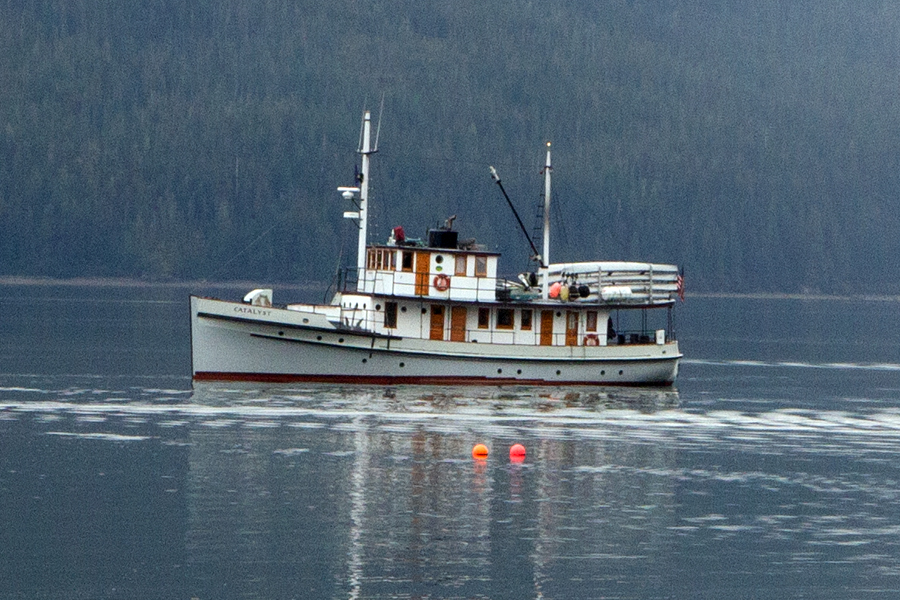